Apple has reportedly fired one of its engineers after his daughter leaked details about the upcoming iPhone X on her YouTube channel.

On Wednesday Brooke Amelia Peterson posted footage of the 10th anniversary iPhone, which she claimed to have picked up when visiting her dad at Apple’s California HQ.

But in a new video posted on Saturday, Peterson said that her ‘honest, wonderful’ dad had lost his job as a result of her video, and begged users not to target him.

‘You know what guys? Hate on me all you want, but please don’t hate on my father, because he’s the best person,’ she said, welling up. 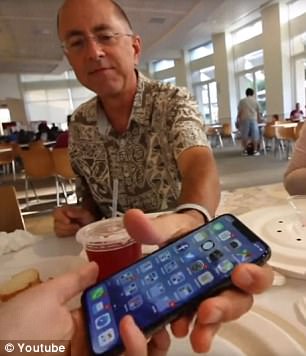 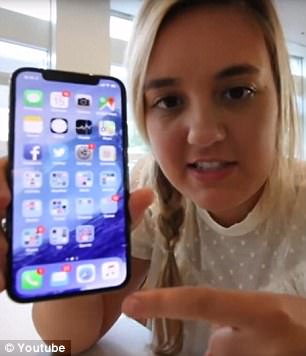 In the video, her dad (left) lets her play with the phone and shows its various functions. That broke company policy, she said – adding that her dad accepted ‘full responsibility’

That video – which she has since deleted at Apple’s request- shows her father using the iPhone X to automatically pay for lunch before he lets her use it.

He is quite aware that she is filming as she activates the Control Center and swipes through the Home Screen’s pages.

‘Dad has the new iPhone X’, she says in the video. ‘Look at how big the screen is… you just swipe to go back home.’

The pair also play with animoji, Apple’s animated emojis that mimic the user’s expression, with her father holding the phone up for her.

Unfortunately for him, that video – which Peterson says she never expected to go viral – led to her father losing his job. 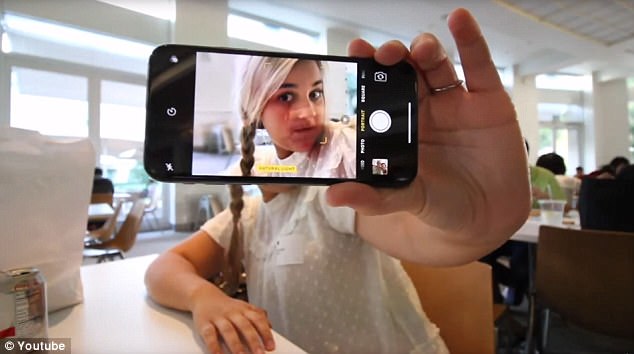 Peterson begged users not to harass her father in the announcement. She took down the original video (pictured) at the request of Apple. It was filmed in one of the company’s HQs

Peterson showed off the phone’s lack of a home button, its large screen and its animated emojis – or Animojis. She said Saturday that her father would be ‘okay’ despite losing his job

‘At the end of the day, when you work for Apple it doesn’t matter how good of a person you are, if you break a rule you’ve gotta go,’ she said in her latest video.

But she adds: ‘I’m not mad at Apple, I’m not going to stop buying Apple products. Rules are in place for the safety and happiness of workers, and my dad takes absolutely full responsibility for the one rule that he broke.’

She added that her dad had ‘a good run’ on Apple, and despite him being fired, ‘we’ll be okay.’

As well as Animojis, Peterson’s video shows the elongated side button and space gray coloring on the back of the device.

The $999 (£999 in the UK) iPhone X features an edge-to-edge display with richer colours, and facial recognition software called Face ID that allows users to unlock the phone without the need for a fingerprint reader or physical home button 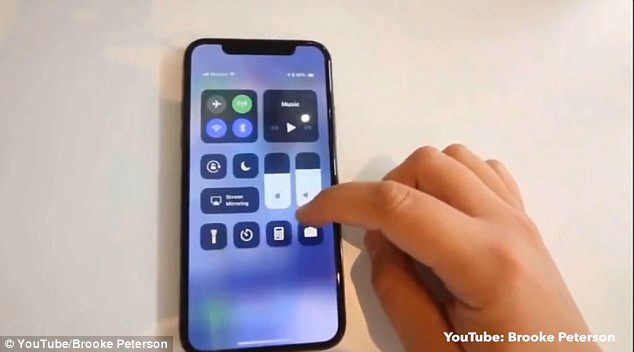 In this still from the video, Peterson activates the Control Centre and swipes through the home screen’s pages. Earlier in the video, her dad pays for lunch by tapping the phone on a register

The new iPhone, which is being released on November 3, has an all new display, called the ‘super retina display.’

On the diagonal, the display is 5.8 inch, with over two million pixels – the highest resolution and pixel density ever seen in an iPhone. It also features an OLED display.

To reach the home screen users now swipe up from the bottom of the screen.

– Pre-orders opened on Friday; will ship on November 3