Safari’s ‘Siri Suggested Websites’ feature has been serving up links to conspiracy theories.

If users typed a term like ‘Pizzagate’ into Apple’s browser, the feature would point users in the direction of a video titled ‘Pizzagate, Biggest Scandal Ever’ by conspiracy theorist David Seaman, according to BuzzFeed.

The issue, which occurred for other popular (and debunked) conspiracy theories, has since been resolved by Apple.

Safari’s ‘Siri Suggested Websites’ has been serving up links to conspiracy theories. If users type ‘Pizzagate’ into the browser, it would point them to a YouTube video promoting the theory

Not only did it surface questionable content for Pizzagate, but other conspiracy theories as well.

Searching ‘QAnon is real’ into Safari would direct users toward a YouTube video titled ‘QAnon is the Real Deal,’ while a search for ‘the Holocaust didn’t happen,’ surfaces a link to a page promoting Holocaust denier theories.

In other cases, Siri Suggested Websites directed users toward questionable webpages like anti-science news site Natural News when the phrase ‘vaccines are dangerous’ was searched.

Another scenario was particularly troubling, as BuzzFeed found that searching ‘whites are smarter than blacks’ would bring up an Answers.com webpage that states ‘Yes, God made white people, blacks came from monkeys.’ 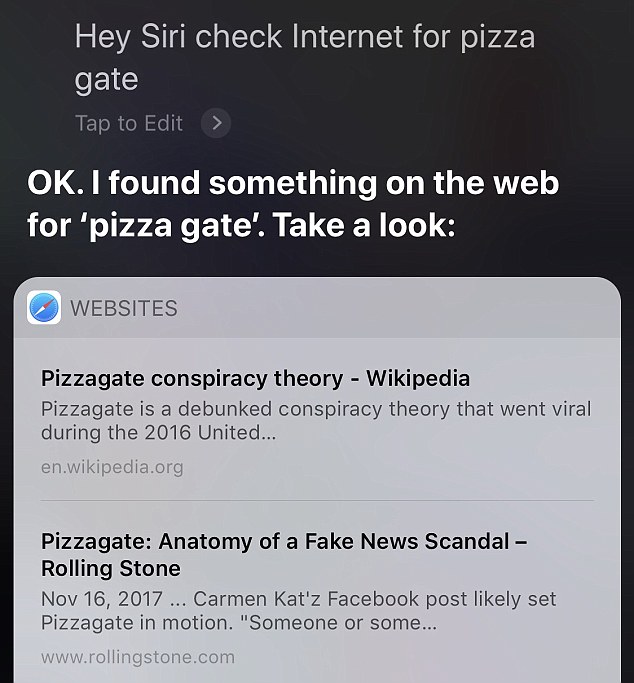 The same issue doesn’t appear to affect the search results provided by Siri on iPhones. Instead, it points users in the direction of verified websites like Wikipedia

‘Siri Suggested Websites come from content on the web and we provide curation to help avoid inappropriate sites,’ an Apple spokesperson told BuzzFeed.

‘We also remove any inappropriate suggestions whenever we become aware of them, as we have with these.

‘We will continue to work to provide high-quality results and users can email results they feel are inappropriate to applebot@apple.com,’ they added.

Apple has since deleted all examples of Siri Suggested Websites that directed users toward conspiracy websites, fake news, message boards and YouTube videos

Another scenario was particularly troubling, as BuzzFeed found that searching ‘whites are smarter than blacks’ would bring up an Answers.com webpage that states ‘Yes, God made white people, blacks came from monkeys’

Apple isn’t the first tech giant to encounter this problem with its search engine.

Google came under fire in 2016 when its search engine was found to be surfacing Holocaust denier links at the top of its search results.

When users would search ‘did the holocaust happen,’ they were directed to a Stormfront.org page titled ‘Top 10 reasons why the holocaust didn’t happen.’

Stormfront is a forum used by members of white nationalist, neo-Nazi groups.

Google later resolved the issue and now shows Wikipedia articles, as well as the United States Holocaust Memorial Museum at the top of its search results.

WHY DID AMAZON’S ALEXA REPEAT A CHEMTRAILS CONSPIRACY THEORY?

The voice assistant has been spouting a government conspiracy theory as an explanation for the oft-debated condensation trails.

Alexa has been recorded telling users: ‘Chemtrails are trails left by aircraft [that] are actually chemical or biological agents deliberately sprayed at high altitudes for a purpose undisclosed to the general public in clandestine programs directed by government officials’.

Amazon says it has taken steps to fix the issue since the error was first discovered.

‘This was an error and has since been corrected,’ an Amazon spokesperson told Mail Online.

It appears that Amazon has changed Alexa’s answer to the question ‘What is chemtrails?’ to say: ‘Chemtrails refer to trails of condensation, or contrails, left by jet engine exhaust when they come into contact with cold air at high altitudes’.

Conspiracy theorists continue to believe that airliners are deliberately spraying a mixture of toxic chemicals into the atmosphere, with undisclosed goals that may have to do with weather modification or mind control.

But this idea has been debunked by scientists on several occasions.