Apple hires 50 doctors and sets its sights on serious diseases

Apple has hired 40 to 50 doctors to work with various team as the firm pits itself as a contender in the health tech field, according to a new report.

The company has made clear that it wants to compete in the medical arena, with the recent launch of an ECG app on the Apple Watch Series 4, and the investment in a new personal health data platform.

Now a new report by CNBC says that the firm is stepping up their approach internally – in a move that could ingratiate some of its fiercest skeptics: the medical field.

People familiar with hiring at Apple say dozens of medical professionals have been brought on as staff in recent weeks.

What’s more, the site says Apple is setting its sights on much more complicated issues than general fitness: the new hires include orthopedic surgeon Sharat Kusuma who will work on an app to help patients after knee and hip surgeries.

Apple is moving beyond general fitness and wellbeing. A new report says the firm has hired dozens of doctors to work on a variety of projects, including one for post-operative care

It isn’t the first batch of doctors to join the firm – there have been physicians working on their products since before the Apple Watch was brought out in 2015. But this is an unprecedented haul and one that seems to be a genuine effort, CNBC says.

The new hires include former Duke University autism expert Ricky Bloomfield, who is working on the health data platform, Gliimpse.

Lauren Cheung and Sumbal Desai, both from Stanford Medicine, are on the Apple Watch, while M. Osman Akhtar, formely of a nonprofit in Minnesota, will be working on AC Wellness, the employee health clinic venture.

According to the report, few doctors have announced their arrival, suggesting the move is not a vanity project.

Most of them continue to practice, keeping them in the loop and in touch with patients’ needs, wants, and the market trends.

And their input is not limited. For example, the report says one of the biggest names, Stanford Medicine’s Sumbul Desai, communicates regularly with COO Jeff Williams.

Apple is hardly the only company vying to get a foot in the patient’s door. Amazon and Alphabet (parent company of Google) are there too.

Amazon is developing a health venture with Berkshire Hathaway and JP Morgan, headed up by star surgeon Atul Gawande.

But comparing their internal efforts to out-swing each other is complicated due to confidentiality. 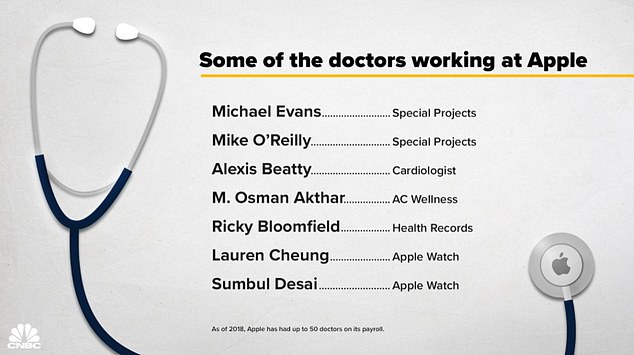