Apple implores creatives to ‘Share Your Gifts’ in a heartfelt, Pixar-esque animated ad

Apple has unveiled its holiday ad – an animated short reminiscent of the poignant filmography of Pixar animation studios.

The ad titled ‘Share Your Gifts’ opens on a picturesque, mountain town and features the sweet ballad ‘Come Out and Play’ by 16-year-old breakout pop star Billy Eilish written for the campaign.

A curly-haired, freckle-faced heroine named Sofia stars in the piece as she is seen working on projects hidden from view on her sticker-covered Apple laptop.

She then prints out, frowns over and places her ideas in a gift box tied with a ribbon and locked down with a hair pick. The only witness to her creativity is her large, shaggy dog.

The following day depicts her hiding her creativity from her elderly bakery employers, a child on a bus and a friend in a coffee shop as Billie Eilish’s song gently chides ‘don’t hide away’.

But, she’s forced to ‘come out and play’ when her dog forces the issue, spilling her hidden work out onto snowy streets that get blown by the wind until they come to rest at a winter carnival. 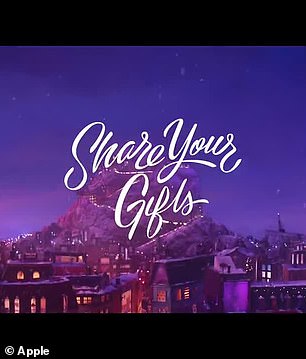 Despite her efforts to hide her talents away, Sofia’s gifts eventually get revealed to the world through the actions of one perceptive dog

There, the baker couple looks on a page still hidden from the audience and gives a smile of acknowledgement to the initially embarrassed Sofia.

She’s then nudged by her dog to see that other townsfolk are picking up her papers with smiles as well.

The heartwarming holiday message of putting oneself out there was done with a mixture of practical sets and computer-generated animation, shown in a behind-the-scenes video featuring the creatives at TBWAMedia Arts Lab, a longtime partner of Apple. 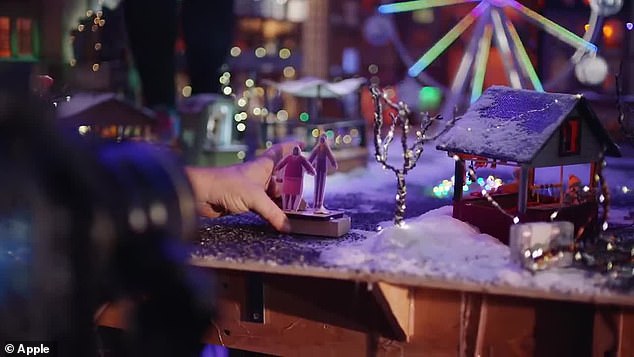 ‘I love the combination of practical sets with CG,’ says the associate creative director named Richard in the companion piece. ‘So, you get amazing performance from the characters, but we’re still in this really art directed environment. Makes people connect with it.’

‘We kind of focused on Sofia’s Macbook and allowing it to show her personality through this tool that really empowered her to make something wonderful and put it out there,’ added producer Tana, highlighting that this is still a commercial.