Finally! Apple is testing a feature that will let you use Face ID to unlock your iPhone even when wearing a MASK, report claims

Face ID, Apple’s facial recognition system, has reportedly received the all-important update as part of iOS 15.4, which is now going through beta testing.

Florida-based iOS user Brandon Butch, one of the early testers, has posted screenshots of the new feature to Twitter.

It seems iPhone users have the option to turn the tool on and off, although Apple says Face ID is more effective while being able to see the entire face.

Since the start of the pandemic, getting Face ID to automatically recognise our face to unlock our iPhones has been a bugbear as we’ve had masks over our faces. With iOS 15.4, that seems to have finally been remedied

USE FACE ID WITH A MASK ON

This feature will work for iPhone 12 and newer when they have iOS 15.4 installed.

Apple’s new software update, iOS 15.4, is being trailed in a beta test released on Thursday, prior to its full release in the spring.

Go to: Settings > Face ID > Use Face ID with a Mask

‘Face ID is most accurate when it’s set up for full-face recognition only,’ Apple’s new feature tells the user, according to the screenshots.

‘To use Face ID while wearing a mask, iPhone can recognise the unique features around the eye area to authenticate.’

According to Butch, users first have to go to their iPhone’s settings and tap ‘Face ID’, followed by ‘Use Face ID With a Mask’ to toggle the option on and off.

Also, the new feature will only work on iPhone 12 and newer, according to 9to5Mac, meaning users stuck with an iPhone 11 or anything older will still have to take their mask off to get Face ID to work.

Apple had introduced a few features in recent software updates that were designed to allow users to get into their phones easier. 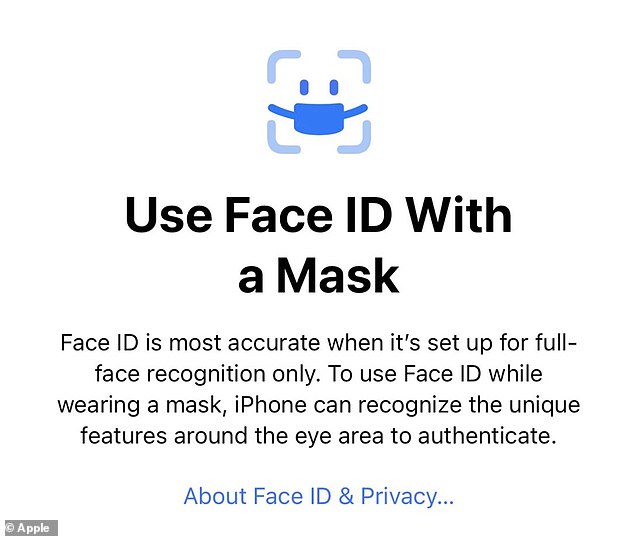 In Settings, Apple says: ‘Face ID is most accurate when it’s set up for full-face recognition only’ 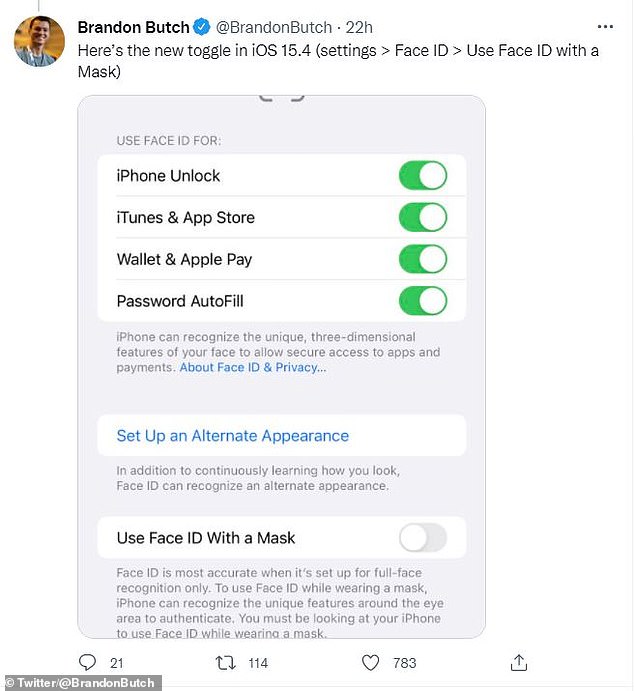 Earlier in the pandemic, iOS 13.5 (released in May 2020) sent iPhone users straight to their passcode prompt when Face ID detected they were wearing a mask.

Prior to this, Face ID had repeatedly failed to display the manual passcode entry due to its inability to recognise a user’s face when half hidden.

Apple’s new software update, iOS 15.4, is being trailed in a beta test released on Thursday, before its full release in spring 2022.

Beta testing involves letting a small group of people use a product in a to uncover any bugs or issues before a general release. 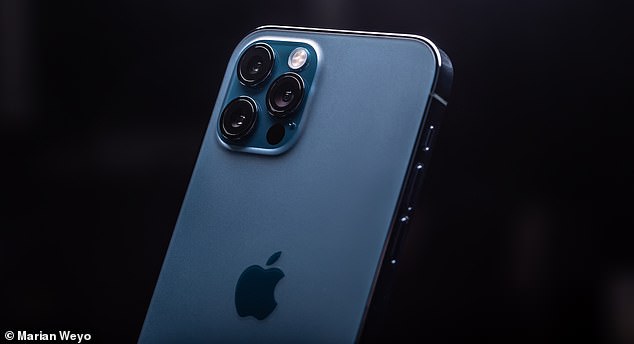 Apple’s new feature will only work on iPhone 12 (pictured) and newer, according to 9to5Mac

Apple is yet to reveal a date for the full release of the iOS 15.4, but it’s likely to be in March or April following at least a month of beta testing throughout February.

Other updates coming with iOS 15.4 are the option to unlock your iPhone while wearing a mask, vaccination records in the Health App and an Apple Card widget in the Today view.

Also included in iOS 15.4 are 37 new emojis, including ‘pregnant man’, biting lip, disco ball, troll with a club and low battery, as well as new smileys and hand gestures.

From a pregnant man to a biting lip, the 37 new emojis coming to iPhones have finally been revealed.

Apple’s own designs for the new emojis are already available in a beta test of iOS 15.4 software update released on Thursday, prior to its full release in the spring.

The Unicode Consortium officially signed off candidates for the next emoji release, version 14.0, in September 2021.

But companies including Apple, Google and Microsoft apply stylised versions of the consortium’s designs to their own operating systems. Here are Apple’s: 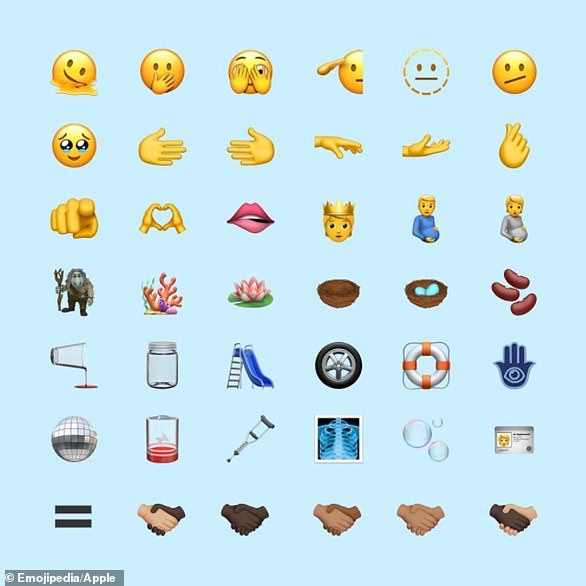 New emojis have arrived on iOS as part of the first iOS 15.4 beta. These include a melting face, pregnant man, mirror disco ball, and multi-racial handshake emojis

– Face with Open Eyes and Hand Over Mouth

– Index Pointing at the Viewer

37 emoji make up ‘Unicode Version 14.0’ and can all be viewed on the dedicated page on Emojipedia’s website.

Emoji Version 14.0, which features the 37 emoji and the numerous variations, are also listed.

‘The distinction between Unicode 14.0 and Emoji 14.0 is that the latter includes sequences where two or more code points can be combined to display a single emoji,’ said Keith Broni at Emojipedia.