Apple has confirmed it will release its new software update, iOS 14.5, next week – complete with a controversial feature called App Tracking Transparency.

App Tracking Transparency is a new anti-tracking feature that aims to crack down on apps that track iPhone users, such as Facebook and Google.

The feature will require all phone apps to get the user’s permission before tracking their data across websites or apps owned by other companies.

It will let users go to their Settings and see which apps have requested permission to track them, and make any changes as they see fit.

The update, which was delayed last year, is a blow to Facebook and other digital services with apps that depend on such data surveillance to help sell ads.

Last night, Apple unveiled a slew of new products in a live-streamed presentation, including a line of computers inspired by its 1998 Mac line and a tracking device called AirTag.

But the announcement of next week’s launch of iOS 14.5 was a much more subtle affair – in smallprint at the bottom of a press release for AirTag.

App Tracking Transparency across iOS, iPadOS, and tvOS will require apps to get the user’s permission before tracking their data across apps or websites owned by other companies

– UI tweaks for the Podcasts app

– New interface for typing with Siri and sending messages with Siri

‘These software updates will be available starting next week.’

It will allow iPhone and iPad users to make ‘more informed choices’ about the apps they use and the permissions they grant to those apps, according to the company.

‘With App Tracking Transparency, users can now choose whether to allow apps to track them,’ Apple says.

Currently, iPhone users are frequently tracked by apps they install unless they take the extra step of going into iPhone settings and opting-out.

However, App Tracking Transparency changes this to an opt-in model, on a per-app basis.

Facebook CEO Mark Zuckerberg has opposed the feature, suggesting that some free digital services will be hampered if they can’t compile personal information to customise ads.

‘Apple may say that they are doing this to help people, but the moves clearly track their competitive interests,’ Zuckerberg said in January.

In December, Facebook took out a series of full-page newspaper advertisements in in The New York Times, The Wall Street Journal and others, attacking Apple in what the social media giant said was a show of support for small businesses.

However, in March Zuckerberg seemed to relax his stance, saying Facebook will ‘be in a good position’ when App Tracking Transparency comes into force.

‘It’s possible that we may even be in a stronger position if Apple’s changes encourage more businesses to conduct more commerce on our platforms by making it harder for them to use their data in order to find the customers that would want to use their products outside of our platforms,’ Zuckerberg said in a meeting on Clubhouse, a private social app on March 18.

Apple announced App Tracking Transparency last June but said in September that it would delay the change to give digital advertisers more time to adjust.

It then confirmed the impending release of the feature earlier this year, saying it would come with the release of iOS 14.5 in the spring. 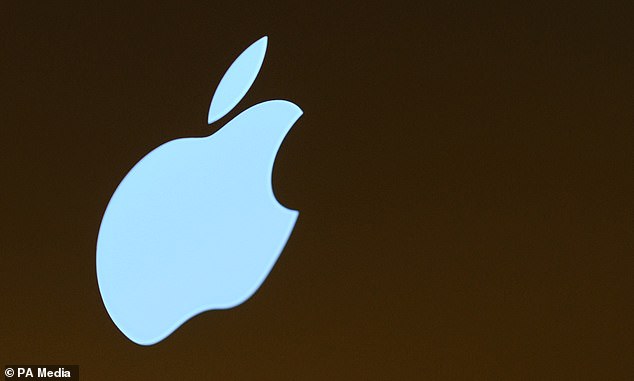 Apple has been holding off the release of App Tracking Transparency to give Facebook and other app makers more time to adjust to the feature, which will require iPhone users to give their explicit consent to being tracked

iOS 14.5 has been tested in beta (prior to an official release) since February 1 this year.

Its full release was rumoured for later that month, but it didn’t materialise – although an Apple spokesperson told MailOnline today that any rumoured release dates for iOS 14.5 were just speculation.

Now, Apple has finally revealed it’s coming ‘next week’, although Apple declined to name a specific date to MailOnline.

As well as App Tracking Transparency, iOS 14.5 includes new voice options for digital assistant Siri, meaning it will no longer be female by default.

It also includes support for using the Xbox Series S/X and PlayStation 5 controllers, more than 200 new emojis and the ability to open iPhones with an Apple Watch for people wearing a face mask. 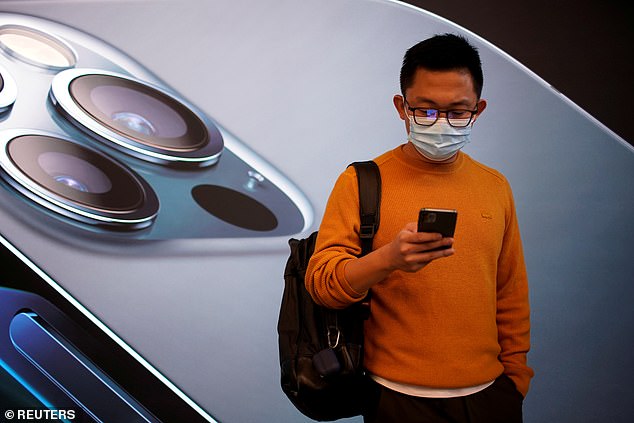 iOS 14.5 will also make it easier for mask-wearing users to unlock their iPhone in the pandemic era 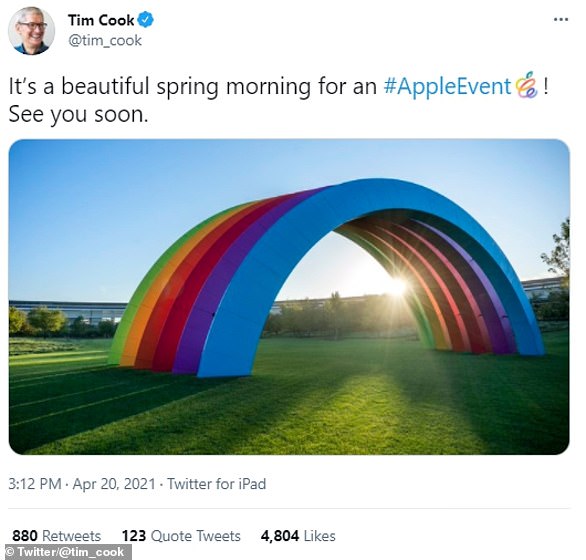 Apple CEO Tim Cook tweeted on Tuesday afternoon: ‘It’s a beautiful spring morning for an #AppleEvent! See you soon’ with a photo of a rainbow structure from Apple Park in California

This included AirTag, a small circular tagging device for tracking everyday items like keys, a line of computers inspired by its 1998 Mac line and a purple iPhone 12.

The product announcement was accompanied by much fanfare from the firm on social media, including Apple CEO Tim Cook, but the company has opted for a much quieter announcement for the release of iOS 14.5.

iOS 14.5 is integral for the new products, such as AirTag, to work on Apple devices.

In a press release for AirTag, Apple said in small print right at the bottom: ‘AirTag requires iPhone or iPod touch running iOS 14.5 or later, or iPad running iPadOS 14.5 or later.

‘These software updates will be available starting next week.’

So iPhone users can expect to get iOS 14.5 the week starting April 26.

In case you missed it, here’s what Apple revealed at Spring Loaded on Tuesday evening.

The £29 AirTag is a small, circular device Apple logo at the centre that tracks missing items through the ‘Find My’ app.

Similar to the already popular Tile tracking tag, AirTags can be attached to non-techy items like keys or wallets and provides notifications when you become separated from the item.

AirTag is equipped with Bluetooth connectivity to pair with an iPhone or iPad.

Using the ‘Find My’ app, the system provides step-by-step directions to locate the tag and the missing product. 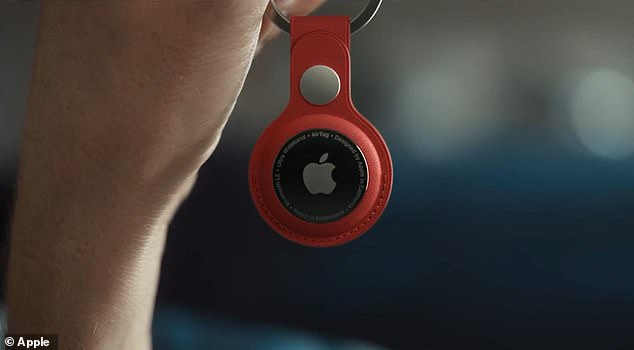 However, Apple emphasized the new device is not for tracking people and has added privacy features to ensure the new AirTags are not used for anything but to find inanimate objects.

Rumors of Apple’s AirTags first surfaced in September 2019, when MacRumors released screenshots it found of a new ‘Items’ tab in the ‘Find My’ app.

AirTag will be available for order on April 23 and will ship April 30.

Apple wasn’t expected to reveal a new phone at Spring Loaded – making the announcement of a new purple iPhone 12 a pleasant surprise.

The new shade of purple will be available for both the iPhone 12 and iPhone 12 mini.

‘The new purple finish, just in time for spring, adds another bright and fun option to the lineup, and we think customers are going to love it,’ said Greg Joswiak, Apple’s senior vice president of Worldwide Marketing. 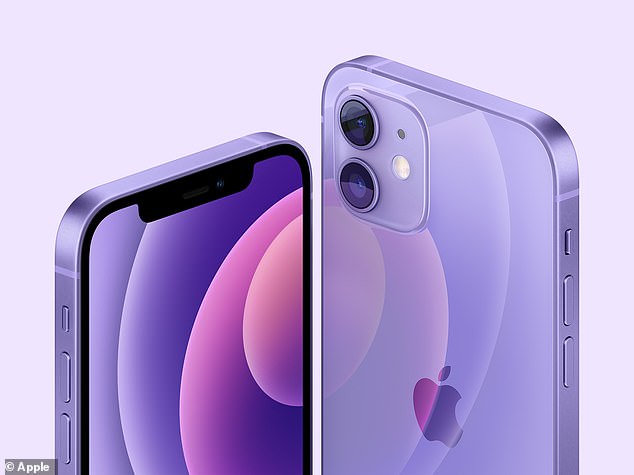 Apple also announced a new range of colourful iMac computers, inspired by one of its most memorable products in its history – the iMac G3.

iMac G3 was the hugely successful series of Apple computers released in 1998, known for its vibrant, translucent range of colours and bulbous body.

It’s also the first to come with Touch ID, making it easier to securely log in, make purchases with Apple Pay or switch user profiles – all of which can be done with the touch of a finger.

The new iMac is the latest addition to the family of Mac models powered by Apple’s M1, chip including MacBook Air, 13-inch MacBook Pro, and Mac mini.

Both the stunning purple iPhone 12 and colorful new iMac computers will be available for pre-orders April 23 and shipped in the second half of May. 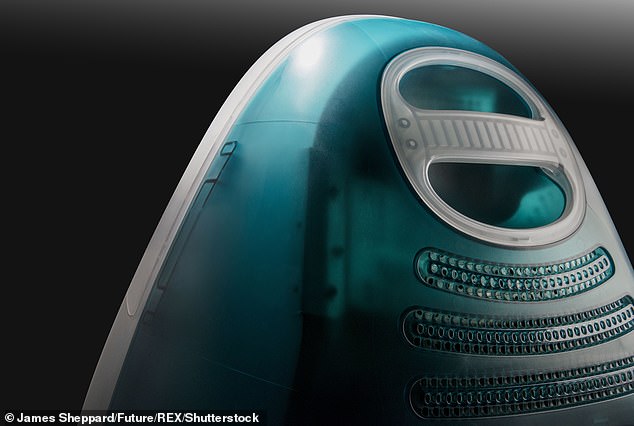 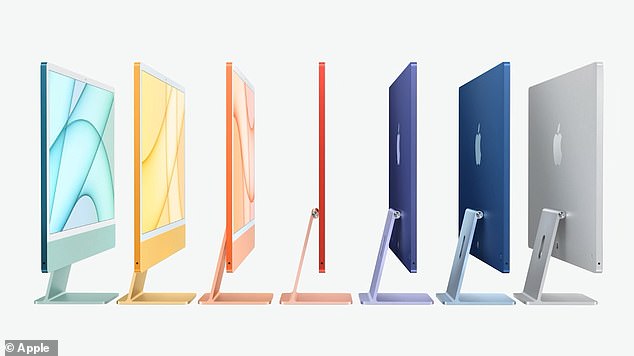 Apple also announced a new iPad Pro that is said to be the most powerful and advanced yet.

The device is the first to include the tech giant’s in-house M1 chip, providing the iPad Pro with similar performance of its iMac desktop computer.

With the upgraded processor, Apple says the graphics performance is more than 1,500 times faster and boasts a battery life of up to 10 hours.

‘The revolutionary M1 chip has been a breakthrough for the Mac, and we’re incredibly excited to bring it to iPad Pro,’ said Joswiak. 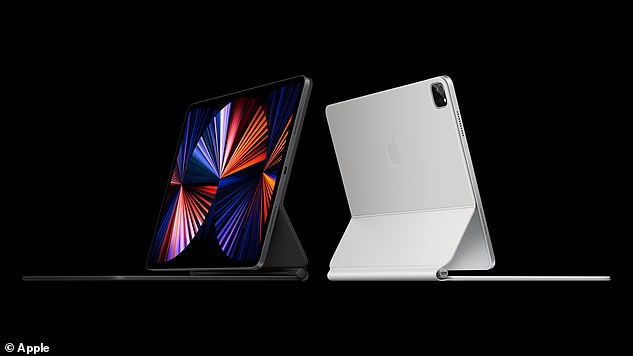 Apple announced a new iPad Pro during its ‘Spring Loaded’ event that is said to be the most powerful and advanced yet. This is the first to include the tech giant’s in-house M1 chip, providing the iPad Pro with similar performance of its Mac systems

Lastly, Apple announced the next generation of Apple TV 4K with a new Siri Remote and a A12 Bionic chip for a boost in graphics.

‘Apple TV 4K is in a category of its own, leveraging a deep integration of Apple hardware, software, and services that delivers a massive upgrade to any TV for the very best cinematic experience,’ said Bob Borchers, Apple’s vice president of Worldwide Product Marketing.

‘With the A12 Bionic and the all-new Siri Remote, Apple TV 4K lets customers enjoy their favourite shows, movies, and more in the highest quality, with simple and intuitive controls.’

Some other Apple products rumoured to be unveiled on Tuesday didn’t materialise, namely a third-generation Apple Pencil and third-generation AirPods – the wireless Bluetooth headphones that come with their own charging case.

Both these products could be unveiled this autumn, along with a new flagship iPhone, expected to be called iPhone 13.

Apple is considering ditching the black ‘notch’ at the top of the iPhone for its next flagship model, the iPhone 13, according to an online tipster.

The rectangular black notch, which has featured on flagship iPhone models since 2017, conceals the phone’s front-facing camera components and sensors. 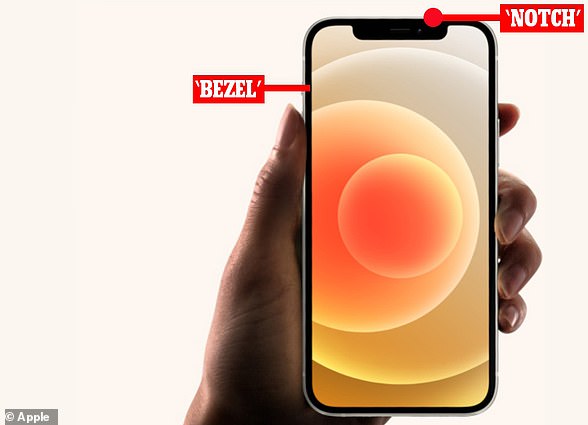 Pictured, the iPhone 12 marking out the notch and the bezel. Zero bezel effectively means the device’s screen blends seamlessly into the edges of the device. The notch’s days may soon be numbered on the iPhone, according to Mauri QHD, an Apple tipster on Twitter

But according to the tipster, who goes by the name Mauri QHD on Twitter, Apple has created an iPhone 13 prototype with no notch at all.

The prototype instead puts these important components at the top of the bezel, the border between a screen and a phone’s frame.

‘There’s a prototype with no notch at all, but – a bit – bigger bezels,’ Mauri QHD tweeted.

All four sides of bezel on the prototype ‘are equally bigger’, he added, meaning the top part of the bezel won’t stick out further than the others.

The sensor-housing notch was first introduced to the iPhone with 2017’s iPhone X – but was mercilessly lambasted by critics and fans alike as a terrible design flaw.

Apple’s phone-making rival Samsung even mocked the notch in an ad for its Galaxy Note 8 smartphone at the time, featuring a man with a notch-shaped haircut.

A report in January indicated that iPhone 13 would see the return of its Touch ID technology, in the form of an in-screen fingerprint reader.

This would help users unlock their smartphones without having to remove their face masks during the current pandemic.

According to Bloomberg, instead of reintroducing a Home button, the Touch ID technology would be embedded within the new iPhone screen

Apple first introduced Touch ID in 2013 with the iPhone 5S, in the form of a fingerprint reader integrated into the iPhone’s home button.

However, Apple started to move away from this technology in 2017, with the introduction of Face ID in the iPhone X.

According to Bloomberg, instead of reintroducing a Home button, the Touch ID technology would be embedded within the iPhone 13 screen.

Rather than being a replacement for Face ID, Touch ID would be an additional method of unlocking the iPhone, according to the report.

iPhone 13 models will feature an upgraded Ultra Wide camera lens with a wider ƒ/1.8 aperture, compared to ƒ/2.4 on iPhone 12 models, according to an investor note shared with MacRumors.

The site said in February: ‘A wider aperture would allow for more light to pass through the lens.

‘The move from a ƒ/2.4 to ƒ/1.8 aperture [will] likely to result in significantly improved low-light performance when shooting in Ultra Wide mode on iPhone 13 models.’