Apple has released the second update for its new iOS 11 system, including a fix for the mysterious ‘crackling’ noise heard by some iPhone users.

After the new operating system rolled out two weeks ago, iPhone 8 and iPhone 8 Plus users complained of hearing a bizarre sound during calls and FaceTime, along with several bugs in the system itself.

The latest release, iOS 11.0.2, claims to fix the crackling issue and problems pertaining to ‘hidden’ photos and inaccessible emails.

Apple has released the second update for its new iOS 11 system, including a fix for the mysterious ‘crackling’ noise heard by some iPhone users. iPhone 8 and iPhone 8 Plus users complained of hearing the bizarre sound during calls and FaceTime

Apple issued iOS 11.0.2 , promising a number of fixes to common complaints to the new system, including the ‘crackling’ noise during calls.

To get the update, go into Settings > General.

Tap Software Update, then press Download and Install for iOS 11.0.2.

The MacRumours thread was started by a user called Vask, who wrote: ‘Is anyone else experiencing a crackling static noise from the earpiece during FaceTime or cellular calls?

‘Strange thing is this noise happens randomly, roughly 1 in 3 calls. This is happening on iPhone 8 plus.’

The thread has dozens of replies from users who experienced the same issue.

In a statement last week, Apple said that the issue only affects a ‘small number’ of cases, but confirmed the company was working on a fix.

Now, the firm has issued iOS 11.0.2, which it claims will solve the problem.

The update: ‘Fixes an issue where crackling sounds may occur during calls for a small number of iPhone 8 and 8 Plus devices, addresses an issue that could cause some photos to become hidden, [and] fixes an issue where attachments in S/MIME encrypted emails would not open.’

Last week, Apple released the first public test version of an 11.1 update to its iOS software, amid growing complaints from users over the software. 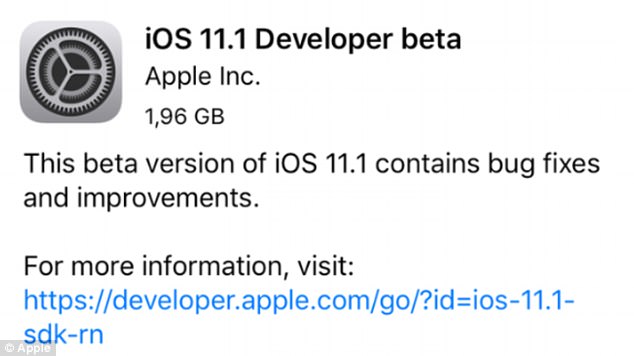 The latest update comes just two weeks after the software was released – and a week after Apple was forced to issue an ’emergency’ 11.0.1 update to deal with major issues.

Beta testers who have signed up for will receive the iOS 11.1 beta update over-the-air after installing the proper certificate on an iOS device.

Those who want to join the beta testing program can sign up on Apple’s beta testing website, which gives users access to iOS, macOS, and tvOS betas.

The move came just two weeks after the software was released – and a week after Apple was forced to issue an ’emergency’ 11.0.1 update to deal with major issues.

However, it appears many users are still suffering problems ranging from app crashes to reboots, causing Apple to issue a ‘beta’ update of an 11.1 version of the controversial software.

It’s only been a week since Apple launched iOS 11 – but, amid complaints of fast-draining battery life, random shutoffs, and phones that now get ‘stuck on apps,’ the firm has already released the first update.

While it remains unclear which bugs have specifically been addressed, some iPhone users have reported that the improvements so far appear to include the battery life issue.

Since the new operating system first rolled out, unhappy users have made one thing clear – iOS 11 is a battery life killer. 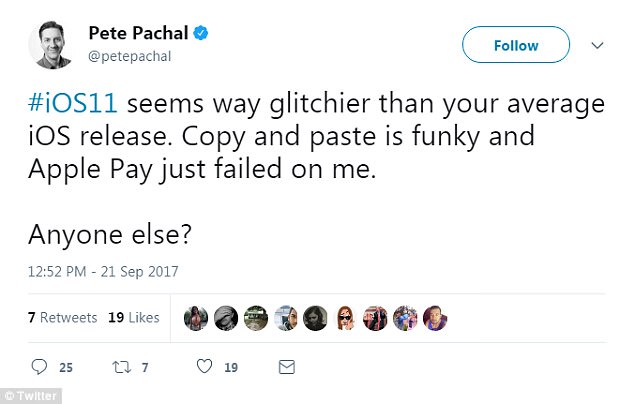 Some have reported that the system is generally glitchy, giving rise to problems with Apple Pay, TouchID, and iMessage 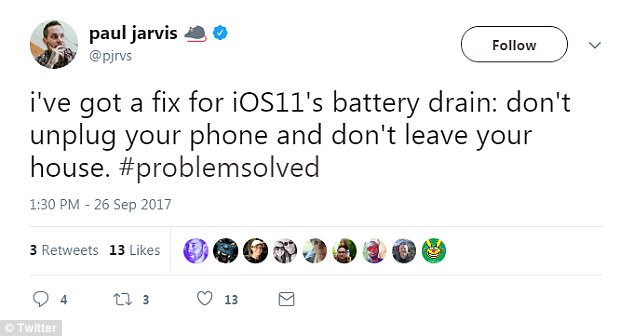 Since the new operating system first rolled out, unhappy users have made one thing clear – iOS 11 is a battery life killer

But, that isn’t the only problem.

Others have reported that the system is generally glitchy, giving rise to problems with Apple Pay, TouchID, and iMessage.

Some users have also reported a bug where their phone network is shown in Chinese characters – even if it’s a UK or US network.

In response to the complaints, Apple put out a quick fix, issuing iOS 11.0.1 .

Apple users who have updated their devices to use iOS 11 have primarily noticed problems with their battery life and app performance.

Some users claim that their phones ‘just get stuck on apps’ and that a hard reset is the only way to resolve the issue. 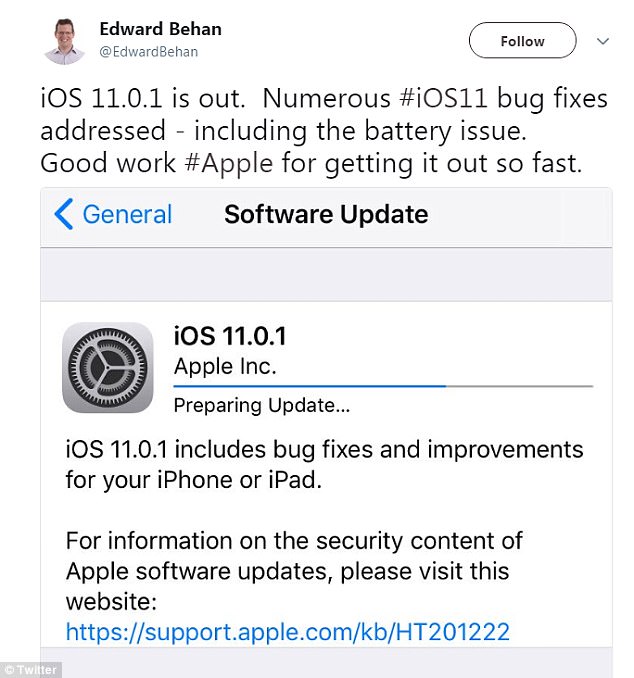 While it remains unclear which bugs have specifically been addressed, some iPhone users have reported that the improvements so far appear to include the battery life issue

HOW TO GET iOS 11 AND PREPARE YOUR DEVICE TO UPGRADE

When it’s released today, you can tap Settings > General > Software Update and carry out the refresh from there.

Alternatively, you can connect the iPhone or iPad to a PC or Mac running iTunes and do the upgrade from there.

Things can go wrong when updating, so it’s always a good precaution to run a system backup first to ensure you don’t lose any of your data.

You can either create a local backup using iTunes, or backup to iCloud by going to Settings > iCloud > Backup, and then turning on iCloud Backup.

You may also need your iCloud, iTunes and encrypted backup passwords to hand.

You can check installed apps for compatibility using a built-in checker tool including in iOS 10.3 or later.

You can find that by clicking: Settings > General > About > Applications.

This will give you a list of all apps that won’t be supported in the upgraded version.

For others the iOS update has drained their battery life – although there appears to be an explanation for this problem.

The study found that battery drain may down to the iPhone’s Spotlight app.

In response to the complaints, Apple has already put out a quick fix, issuing iOS 11.0.1 today. But, it’s unclear which bugs have been addressed

– New ‘Files’ app for all documents, including those from third-party apps

– Map updates, including a ‘Do not disturb while driving mode’

– Ability to see what friends are listening to on Apple Music

In the report, La Porta wrote: ‘This is partly due to Spotlight re-indexing and other behind the scenes shuffling.

‘New functionality in iOS 11 could also be responsible for draining the life out of your phone.

‘Animoji and iPhone X’s FaceID hardware use face-scanning technology relying heavily on the camera which is a notorious battery sucker.

‘The hardware enabling this advanced facial recognition in the iPhone X could be the reason there is such a dramatic difference in battery decay rate.’

Angry Apple fans have also complained at a reduction in app functionality.

According to numerous posters on social media site Reddit, users are experiencing a massive drop in performance since upgrading to the latest operating system. 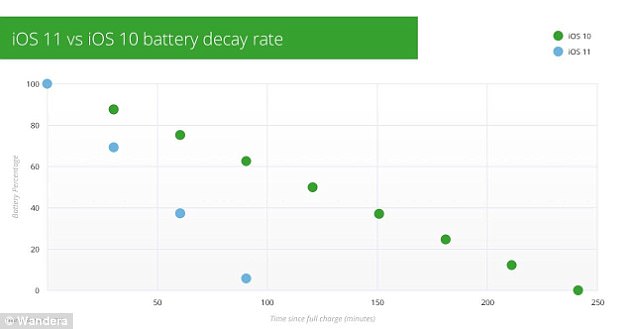 Many are complaining that apps are crashing when they try to open them, or are failing to load altogether.

User leejoness said: ‘Ever since I upgraded, launching apps is an absolute chore.

‘They either crash back to home, freeze and require closing the app or take well over a minute to load.

‘I never had a single issue with my 7+ before last night and now suddenly it’s like this phone is stuck in quicksand. 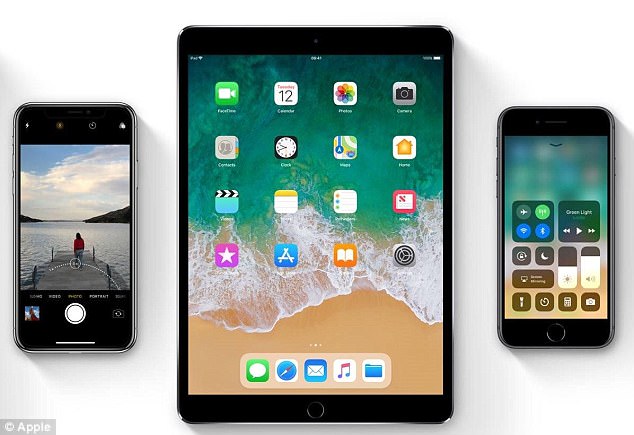 Apple users who have update their devices to use iOS 11 have noticed problems with their battery life and app performance. Pictured are what iOS 11 will look like on iPhones and iPads

‘I’ve never had to hard reset this phone before but I’ve had to do it twice in the past two days.

‘Is anyone else experiencing this? Or is there a fix?’

Apple released its iOS 11 software last week and fixes for bugs are likely to be rolled out in future updates.

iOS 11 also includes a couple of features that are specific to the iPhone X, such as FaceID and animated emoji, or animoji.