Apple said it received as many as 16,249 national security requests affecting up to 8,249 accounts during the second half of 2017.

The number of requests rose 20 percent compared with the first half of 2017, when Apple received 13,499 such requests.

But the most recent figures are more than two-and-a-half times higher than the comparable period a year earlier, when Apple received only 5,999 such requests.

Apple said it received as many as 16,249 national security requests affecting up to 8,249 accounts during the second half of 2017

Other tech firms also experienced a jump in national security request between the second half of 2016 and the first half of 2017.

Facebook and Google have not yet reported full numbers of national security requests for the second half of 2017 because both companies break out individual figures for both National Security Letters and requests under the Foreign Intelligence Surveillance Act, or FISA.

The FISA numbers are subject to a six-month reporting delay by law.

Apple publishes an aggregate number of both types of requests and so is able to report the figures sooner. 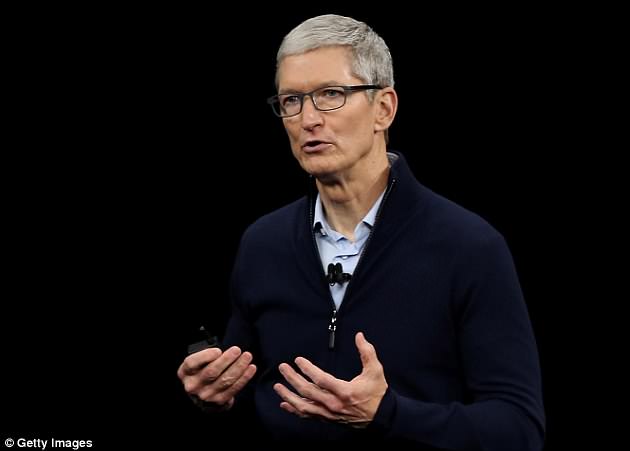 The number of requests rose 20 percent compared with the first half of 2017, when Apple received 13,499 such requests. Pictured: Apple CEO Tim Cook

Apple also said on Friday that it would start reporting requests from governments to take down apps from its App Store.

Last year, Apple took down virtual private networking apps, or VPNs, from its App Store in China in order to comply with a new Chinese cyber security law.

Apple’s new tracking of app takedown requests starts on July 1, so the data will begin to appear starting one year from now.

WHAT KINDS OF DATA HAS APPLE COLLECTED ON YOU?

Apple is rolling out a new privacy portal just in time for the European Union’s new General Data Protection Regulation law, which will go into effect on Friday, May 25.

As part of the new privacy portal, users in the EU can download all the data that the iPhone maker has collected on them.

It may take up to a week for the file to be sent, as it’s quite large.

Similar to other data portability features, users are emailed a file with all the data in a compatible format so that it can be moved to a new cloud service if they wish.

Here are the kinds of data that Apple has stored from users: