Apple is requiring developers to include privacy ‘nutritional labels’ if they want to be featured in the App Store.

Product pages show information regarding what data is collected, including whether that data is linked to users or is used to track their activities.

According to a rendering provided by Apple, developers need to disclose if they gather users’ name, email and physical address, financial information, browsing history, purchase history, usage data and geographical location, among other data.

The requirement will impact new apps or any app updates starting December 8.

A rendering of what the App Store ‘nutritional labels’ will look like. Developers need to disclose if they gather users’ name, financial information, browsing history and geographical location, among other data

Developers will also need to be transparent about the practices of third-party partners whose code is integrated into their app.

Some disclosures are optional, including data not used for tracking purposes or for third-party advertising or information gathered in optional feedback forms and customer service requests unrelated to the app’s primary purpose.

Also exempt is data is provided by the user in an app’s interface, ‘where it is clear to the user what data is collected, the user’s name or account name is prominently displayed in the submission form… and the user affirmatively chooses to provide the data for collection each time,’ according to Apple’s Developer site.

Developers are expected to keep their labels current but, as The Verge notes, Apple is relying on companies to self-report, so the possibility of malfeasance remains. 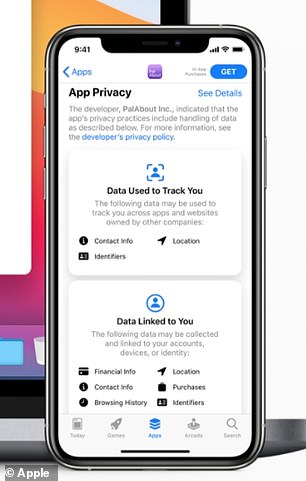 The new label requirement goes into effect December 8. Developers will also need to be transparent about the practices of third-party partners whose code they use in their app

Apple first announced it would be adding new privacy features to iOS 14 at the Worldwide Developers Conference in June.

But when the operating system debuted In September, it didn’t include an announced requirement that developers ask for permission before tracking users’ mobile activity and data.

Saying it wanted to give developers more time to adjust, Apple pushed the feature to early 2021.

The delay could benefit Facebook, which says changes to Apple’s privacy policies would render one of its mobile advertising tools ‘so ineffective on iOS 14 that it may not make sense to offer it.’

Advertisers who use Apple’s tracking identifier or similar tools will have to show a pop-up notification asking for permission.

‘When enabled, a system prompt will give users the ability to allow or reject that tracking on an app-by-app basis,’ Apple said in a statement.

‘We want to give developers the time they need to make the necessary changes, and as a result, the requirement to use this tracking permission will go into effect early next year.’

Advertisers say the system is likely to slash revenue, since many users will opt not to allow tracking.

In August, Facebook said iOS 14’s new privacy guidelines could cut in half the amount publishers make from targeted advertising, and possibly force the company to pull its Audience Network altogether.