Apple’s Watch has been something of a slow burn among consumers – but, with the latest model that packs in cellular capabilities for the first time, expect that to change very quickly.

Where it’s primarily been a hit for its fitness and health tracking, the latest update is going to open up a whole new world – and see consumers leaving their phone at home.

Apple has managed to cram in cellular capabilities that let you make calls, use apps and get notifications anywhere you have coverage.

After just a week with it, I’ve already found myself not bothering to take my phone on runs, quick trips to the shop and even the odd night out.

Apple has revealed its newest smartwatch will be equipped with its own built-in cellular capabilities for the first time. The $399 Series 3 Apple Watch will allow users to make calls directly from their wrist, without an iPhone nearby

– Will soon stream from Apple Music

– Siri can give ‘out-loud’ alerts

– Comes in a wide variety of colours including silver, space grey, ceramic grey and a new gold colour

– Only size change is a back crystal extended 2.5mm, as thin as two sheets of paper

Leaving your phone at home usually involves living with the fear of missing out on an important message.

With the new Apple Watch, there’s none of that.

Of course, there are many times only a phone will do, and I did find myself missing having a camera with me on a couple of occasions, or wanting to read a book on the Kindle app.

However, for the most part, if you know you’re not going to be bored and need a distraction, then the Watch will do absolutely everything you need, from play music to let you answer messages and emails – and take calls.

Siri has also been dramatically improved, and its dictation is now incredibly impressive, meaning for short messages, you don’t miss a keyboard (although you do look like an idiot).

Perhaps most importantly, for the average consumer who isn’t worried about fitness tracking, it could finally become a compelling reason to buy an Apple Watch.

The first thing that strikes you about the watch is that there’s absolutely nothing different about it – apart from a red dot on the crown.

Apple has done an amazing job keeping the dimensions and weight the same.

Indeed, even using the new phone app is seamless, and there’s absolutely nothing new to learn – you simply don’t need a phone to do it.

There are some new watch faces with a signal indicator, which let you check you have signal

I tried the watch running on AT&Ts network, but in the US it’s also available on Sprint Wireless, T-Mobile USA and Verizon Wireless, while in the UK it will use EE.

In general it worked extremely well, although some other reviewers have struggled with the watch connecting to unsecured wifi networks – something I only ever noticed happen once during my (limited) time with the watch.

Its also worth noting that the watch can’t roam, so you won’t be able to use it abroad.

Carriers are likely to charge around $10 per month, although many are giving three month trials.

I was also pleasantly surprised by the battery life from the Watch – and only once, after day that involved a 10k run, a lot of messaging and several calls, did I come anywhere near to draining the battery by the evening.

Here are some of the key features:

The key to the Watch’s success has been its fitness tracking, and the series 3 (or more specifically, WatchOS 4) add some new options.

The Activity app can now give you ‘nudges’ if you’re falling behind, based on  your personal activity levels and the day’s progress – it’ll even end the agony of trying to close your rings at the end of a day by telling you exactly how much exercise (for examples, a brisk 15 walk) you need to do.

There also also far more options for sports – with squash and cricket making the list, for instance. 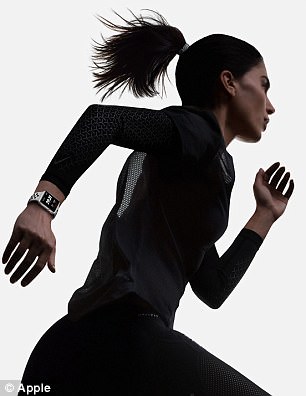 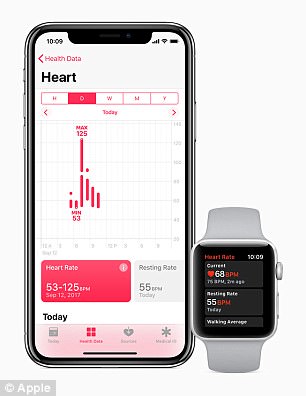 You can also choose to receive a notification when your heart rate is elevated above a specific threshold while inactive – and the watch sets this at 120bpm. 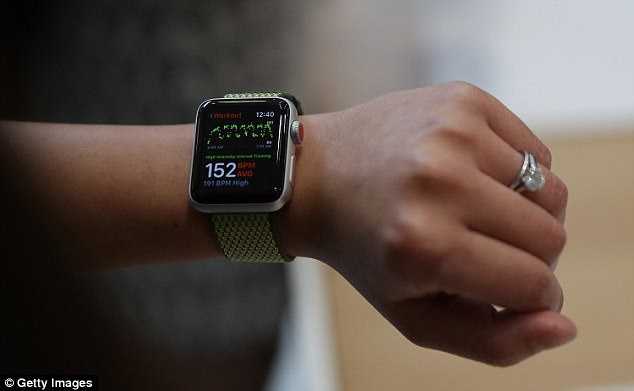 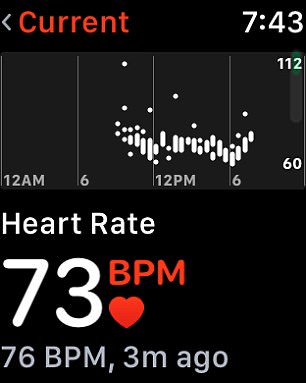 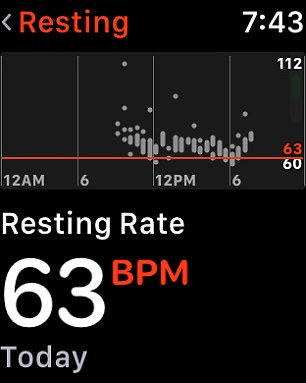 Resting and walking heart rates are defined by using background readings and signals from the accelerometer, and expect these to quickly become your new obsession (and the thing watch owners brag about).

During workouts, you will see your average and highest heart rate reading, and the recovery rate tells you how quickly your heart rate drops after a workout.

A lower resting heart rate and a shorter recovery time can be an indication of improved fitness, Apple says. 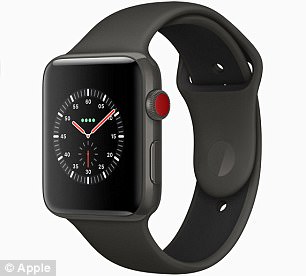 But even without, the microphone and speaker make it perfectly acceptable to make a call from your wrist.

The Phone app also allows you to easily find the right number, or you can simply ask Siri.

One thing to bear in mind is that as notifications come from your linked phone,  if it runs out of power, while you don’t lose connectivity or message, you’ll lose some notifications from apps.

The watch shares the same number as iPhone.

Technically, cramming a phone inside the watch was an astonishing feat on engineering.

Apple developed a design that uses the display itself as both a transmitting and receiving element for cellular signals, along with a built in eSim over one-hundredth the size of a traditional SIM card.

However, there are a few issues – for instance, wifi networks can sometimes confuse the watch.

Although this is rare (I spotted it once in a week of use), Apple has admitted there’s a flaw.

‘We have discovered that when Apple Watch Series 3 joins unauthenticated Wi-Fi networks without connectivity, it may at times prevent the watch from using cellular,’ Apple said in a statement.

‘We are investigating a fix for a future software release.’ 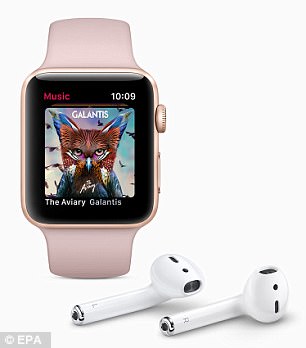 Lots of users have probably never used their watch to listen to music, but with an overhauled look, it’s well worth giving it a try.

The Music app now automatically syncs intelligently curated playlists from Apple music, including My New Music, My Favorites, My Chill Mix, and Heavy Rotation, downloading them to your watch.

It’s also fun to flip through the tracks using the crown, or you can simply ask Siri.

The sound quality is just as good as the phone (or more accurately, as good as your Bluetooth headphones). 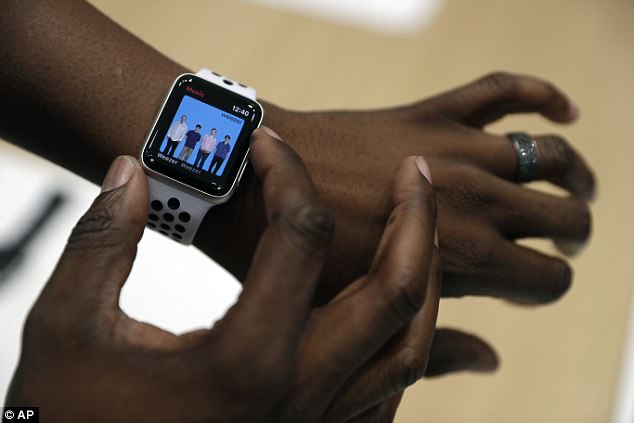 The redesigned music app is incredibly simple to use, and lets you easily scroll through music and playlists.

The software is also far better at working with third party music services, so if you use another music service, or even something like Sonos at home, you’ll find the music pops up and can be controlled from your watch.

There’s also an even more impressive change in the works, when Apple lets you stream music and radio straight to the watch, giving you access to 40 million songs and radio stations from around the world. 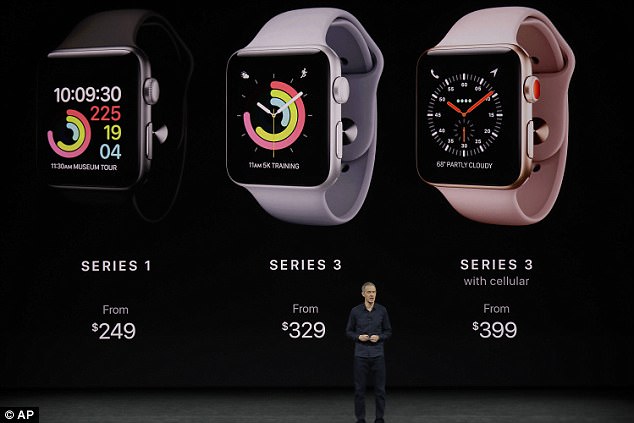 The Series 3 Apple Watch is set to begin pre-orders on September 15, before it officially becomes available on September 22. In addition to the watch with mobile data connectivity, it will also come in a $329 version that does not have cellular capabilities

Overall, the Apple Watch Series 3 is a stunning achievement from an engineering standpoint, but also, crucially, makes a huge step towards changing the way we use technology.

While obviously Apple is unlikely to stop wanting you to buy a phone, what the Watch does with its cellular capability is become the ultimate accessory, and free you from having to take the phone everywhere.

For phone addicts and those who really do have to stay in touch and available at all times, it’s a godsend.

But most importantly, for the average consumer who isn’t worried about fitness tracking, it could finally become a compelling reason to buy an Apple Watch. 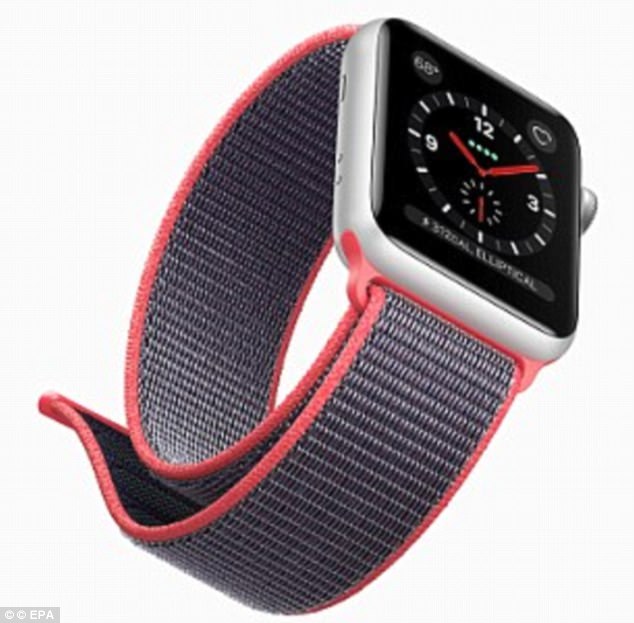 Apple’s new $50 sport loops, which use velcro to close – and are incredibly comfortable, more so that even the previous sport bands. They’re also easy to wash when they get sweaty