Channel 10’s beloved Australian soap Neighbours has finally wrapped up for good and last Wednesday the cast and crew reunited on set for a special finale event.

And star April Rose Pengilly shared the moment to her socials, as a way of saying how sad she was to be saying good bye.

Posting to Instagram the 34-year-old beauty made a touching tribute to the entire team behind the long-running series.

Describing her feelings as ‘raw’, April, who plays fan favourite Chloe on the show, said, ‘I just have lots of love for my Neighbours family, and for all of you who have supported us.

Neighbours was axed after the UK’s Channel 5 decided in March not to renew its contract with production company Fremantle to finance and broadcast the series.

April, who is the daughter of INXS star Kirk Pengilly, revealed in her Instagram story that she was heartbroken to learn, ‘that our sets, my home for the past four-and-a-half years were already being destroyed.’ 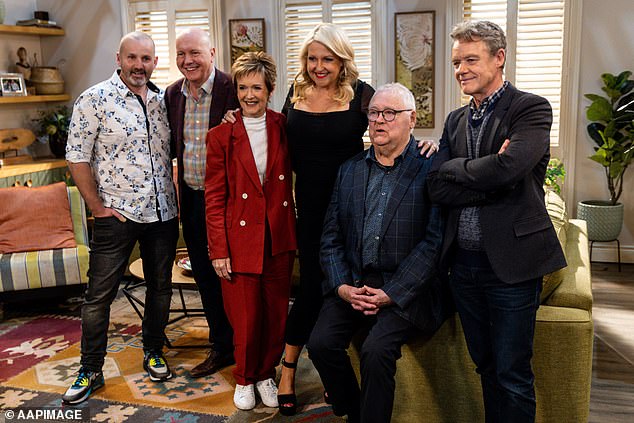 Promising that she would have more to say ‘later’, April thanked Neighbours’ producers Fremantle and Channel 10 for the special farewell dinner.

Earlier this month, the TV Week Logie Awards attracted widespread criticism for failing to properly acknowledge the cancellation of Neighbours during the ceremony.

But it seems Australia’s longest-running soap will receive the send-off it deserves at the next AACTA Awards ceremony. 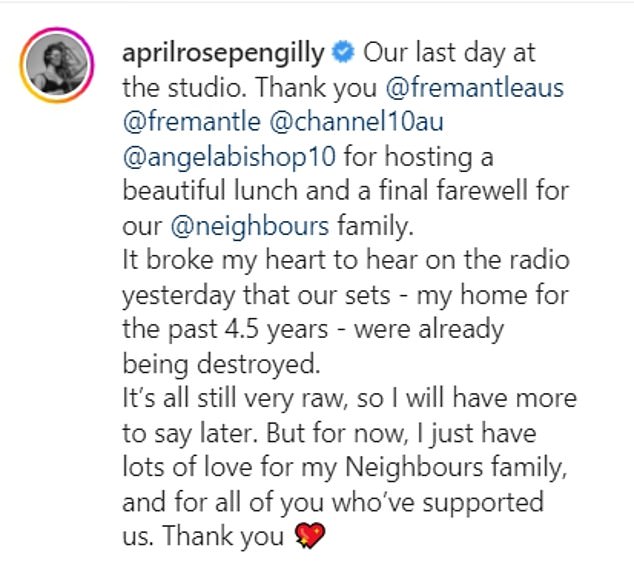 The AACTA Awards, sponsored by Foxtel, is set to invite the cast of Neighbours on-stage and ‘make a point’ of saying goodbye, Foxtel’s Executive Director of Drama Brian Walsh told MediaWeek.

‘It was a major disappointment for me particularly because we had the cast of Neighbours in the room. What would it have taken to let them come up on stage and have their moment?’ said Walsh, who worked as a publicist for Neighbours in the 1980s.

Walsh described the Logies send-off as ‘dismissive’, adding: ‘If we’re going to celebrate success on a night like the Logies then for goodness sake, please let a show that’s entertained audiences for 37 years have its moment and take a bow.’

The last episode of Neighbours will air in Australia and the UK on August 1. 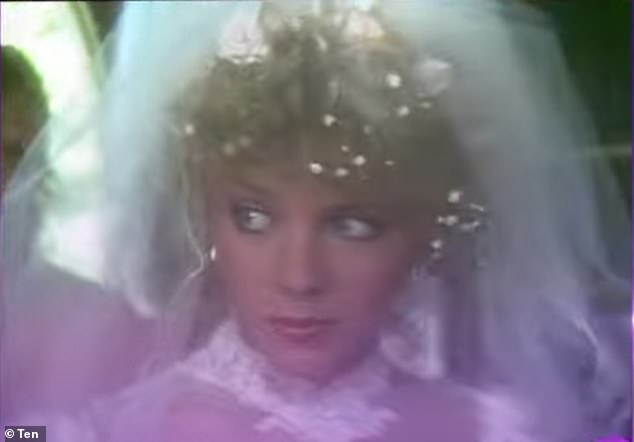 During the Logies’ tribute, a highlight reel aired of Neighbours’ most memorable moments, including fan favourites Kylie Minogue (pictured) and Jason Donovan