Archaeologists discover rare stash of 1,400 year-old copper coins in Phanagoria, an ancient Greek City site in Russia, with experts believing the stash was hidden prior to devastating Huns or Turks attack

Archaeologists have discovered a horde of copper coins from the sixth century in Phanagoria, an ancient Greek city in what is now modern-day southwestern Russia.

According to a translated statement from the Institute of Archeology of the Russian Academy of Sciences, 80 copper staters were found in the remains of a 6th century fire. 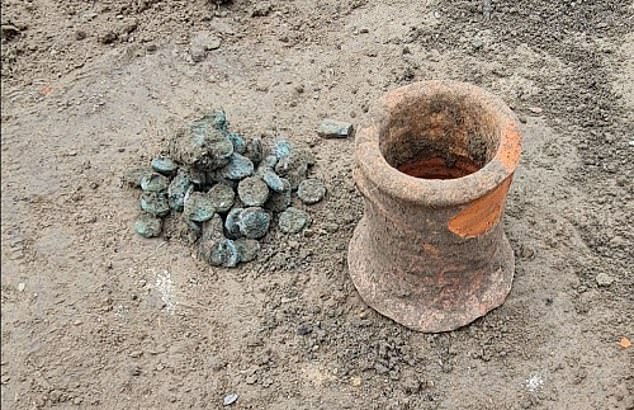 80 copper staters were found in the remains of a fire that may have destroyed part of the city. The fire may have stemmed from the attacks orchestrated by the Huns or Turks

Experts believe the fire may have destroyed a ‘significant part of the city’ and may have stemmed from the attacks that were orchestrated by the Huns or the Turks.

‘Treasures [like this] are not often found,’ said Vladimir Kuznetsov, head of the Phanagoria archaeological expedition of the Institute of Archeology of the Russian Academy of Sciences, in the statement.

‘As a rule, they are evidence of catastrophic events in people’s lives, as a result of which the one who hid money or valuable items was unable to return and use their savings.’

A copper stater was an ancient coin used in different parts of Greece, the earliest which date to the 8th century B.C.

The ruins of Phanagoria are located in what is now modern-day Krasnodar Krai in the Taman Peninsula, off the coast of the Black Sea. 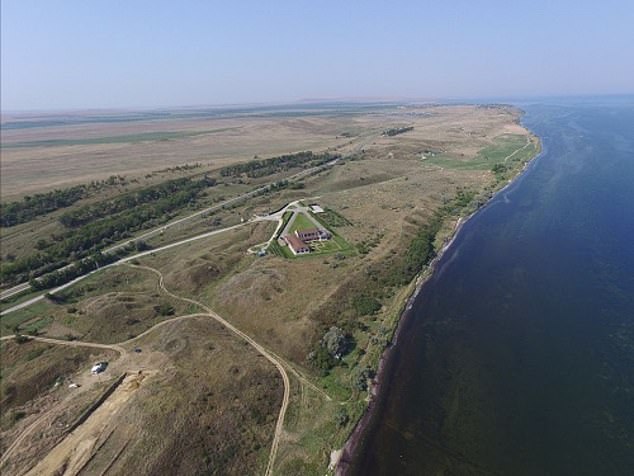 The ruins of Phanagoria are located in what is now modern-day Krasnodar Krai in the Taman Peninsula, off the coast of the Black Sea 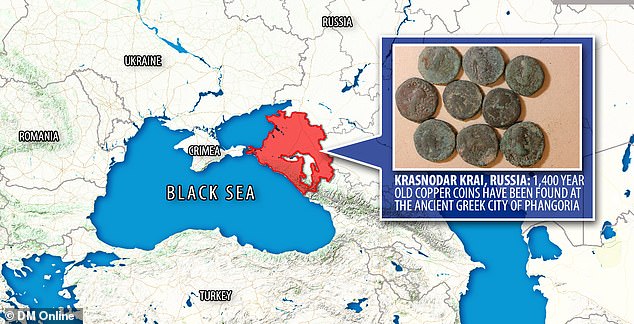 Krasnodar Krai in the Taman Peninsula is just off the coast of the Black Sea, near Crimea

Kuznetsov explained that this discovery is ‘associated with a dramatic and mysterious page in the history of medieval Phanagoria – the capital of one of the earliest Christian dioceses in Russia.’

The researcher added that the discovery ‘speaks of the extraordinary circumstances under which [the objects] were hidden, as a result of the potential attack of the person’s enemies.

‘In a hurry, a resident of Phanagoria hid a bundle with 80 coins in the throat of an old broken amphora that had turned up under his arm and covered the hole with earth.’

It’s likely that the coins were minted in the late third or early fourth centuries, Kuznetsov and his team determined.

They likely emanated from the Bosporan kingdom, with the last coin coming from this empire in 341 AD

They likely emanated from the Bosporan kingdom, with the last coin coming from this empire in 341 AD.

However, a mass of staters made of copper-lead alloy continued to circulate in the Bosporous for several centuries, with Byzantine gold playing the role of ‘expensive’ money, Kuznetsov added.

In 2019, Kuznetsov and other researchers found a gold coin nearby, minted during the reign of Byzantine emperor Justinian I.

It’s likely that both discoveries are associated with ‘turbulent historical event’s of the time, with a revolt against Hunnic leader Gord in 528 or 534, according to Artnet.

The second discovery of the gold coin stems from the later part of the century, but the reason for its burial is still unknown.

‘The gold coin of Justinian I found two years ago in Phanagoria serves as proof that the new treasure is associated with the second, late fire of the 6th century,’ noted Kuznetsov.

‘But who exactly – the Avars or the Turks – destroyed the capital of the Phanagorian diocese, remains unknown. The new treasure from Phanagoria is an invaluable evidence of historical events and the economy of the early Middle Ages.’

WHAT DO WE KNOW ABOUT THE ANCIENT CITY OF PHANAGORIA?

Phangoria, as it was known to the Ancient Greeks, was the capital of the Bosporan Kingdom, around 2,000 years ago.

It was an important centre of trade between the southern Caucasus and the Maeotian Marshes.

The city is situated between the Sea of Azov and the Black Sea, on Russian soil.

It remained a thriving area of commerce for 1,500 years up until the 10th century AD, when an invasion by tribes of The Rus – who lent their name to the modern area of Russia – led to the city’s downfall.

It was later found in the 18th century, when archaeologists discovered the bases of statues with dedications to the Ancient Greek goddess Aphrodite .

A large area of the city remains underwater, and archaeologists continue to explore its submerged secrets.

The submerged city is said to contain the oldest known acropolis discovered in modern day Russia.