Ancient Egyptian art frequently depicts people wearing cone-shaped headgear, but none has ever been found.

Now an international team of archaeologists has uncovered the first ever physical evidence of Egyptian head cones in the ancient city of Armarna, 194 miles south of the capital Cairo.

The head cones, made from wax, were discovered at two graves in 2010 and 2015. They were found in fragments but researchers have been able to reconstruct their shape.

They provide the first conclusive evidence that the objects actually existed and were worn by Egyptians, according to the archaeologists.

Due to the lack of material evidence, scholars have previously speculated that the head cones only ever existed as mere depictions in art.

Some believed that they were entirely symbolic – like halos given to religious figures in Christian art – while others argued that they did exist but were made of materials that did not survive.

Cone 1 excavated at the South Tombs Cemetery in 2010,  on the remains of an individual estimated to be a 20–29-year-old female 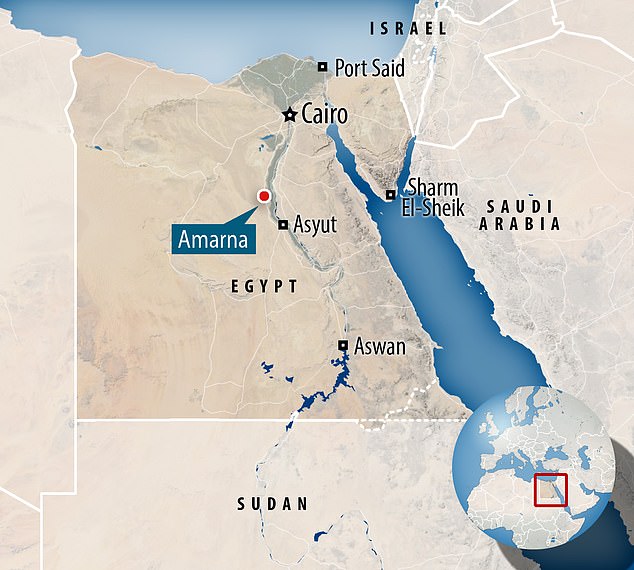 The Egyptian city of Amarna, 194 miles south of the Egyptian capital Cairo, was abandoned in 1332 after being occupied for only 15 years

The graves in which the cones were discovered are thought to have belonged to the non-elite, suggesting that the cones were not a particular mark of status.

‘These are the first archaeological examples of this usual headwear yet known from Egypt, although we have many images of people wearing them’, said Anna Stevens, lead author of the study.

‘Many questions remain about the meaning and function of the head cones – and the excavated examples won’t answer them all.

‘But careful excavation has now shown that the cones certainly existed in 3D form, that they could be worn by the deceased and that they were not only for the elite.’

Spectroscopy analysis of the cones revealed that they were hollow and made of plant or animal wax – most likely beeswax.

It is believed they may have been infused with perfume to purify the wearer so they could engage with the rituals and deities of the afterlife.

Other theories suggest they may be connected with ideas of fertility and resurrection.

Based on cranial and pelvic observations of the human remains found with the head cones, one of the bodies is believed to be of a woman aged between 20-29 years at her time of death, still with well-preserved hair under the cone. 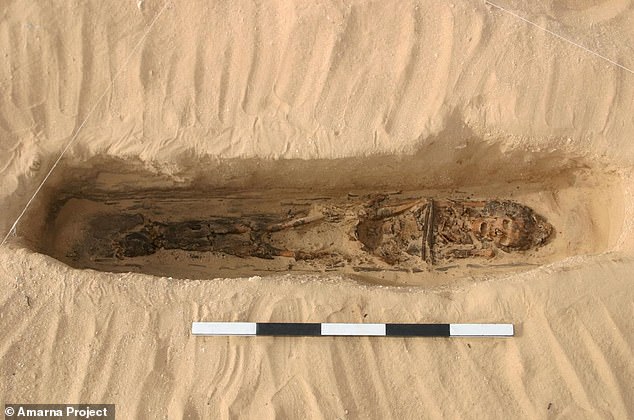 The adult female remains in its original place of discovery, compelete with headcone and well-preserved hair 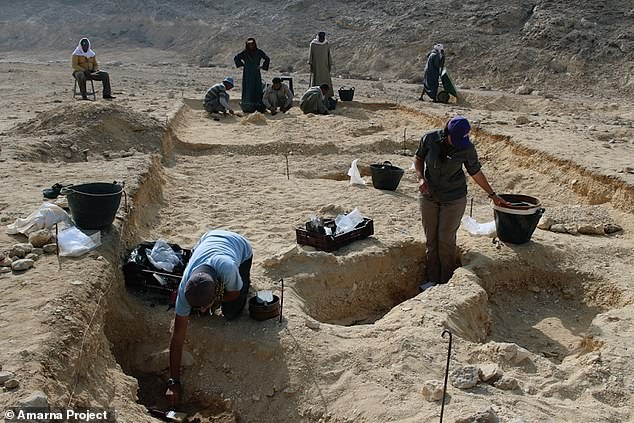 Researchers say it’s probable that these two cones were ‘model’ versions made for a burial environment, and that cones intended to be worn by the living could have been constructed differently.

Scholars often link the cones with sensuality and sexuality, as they frequently appear in artistic imagery of women – sometimes unclothed.

One popular theory is was that they were an unguent – pieces of fat or wax perfumed, perhaps with myrrh.

As the cone melted, the scent was released, with some ancient Egyptian literature suggesting that this process would scent and cleanse the hair and body. 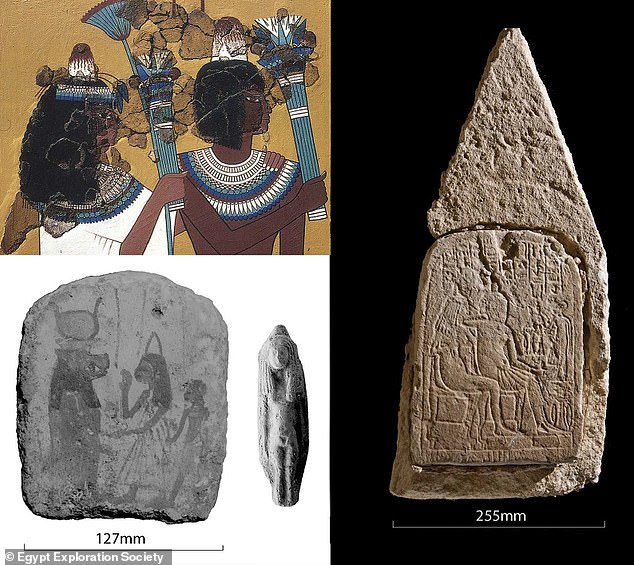 Head cones are worn by females and males in Ancient Egyptian art depicting banqueting scenes, including those honouring the dead, funerals, or people being rewarded by the king

A reconstruction of the two cones, revealing they are both hollow

It is not known why these cones were included in the burials, but researchers suggest they may have been symbols meant to enhance the rebirth or personal fertility of the deceased in the afterlife.

They have also previously simply been interpreted more broadly as symbols of the tomb owner’s contentedness in the afterlife.

The city of Amarna was built by the pharaoh Akhenaten as home for the cult of the sun god Aten and now contains thousands of graves.

The city was abandoned around 10 years after the pharaoh’s death, despite only being occupied for 15 years from 1347 to 1332 BC.

But the abandoned city attracted ancient looters, who stole from all four cemeteries at the site.

This has made the task of piecing together all the disturbed burials all the more difficult for archaeologists of the Amarna Project, who have been excavating the site since2005.

The study of the two head cones has been published in the journal Antiquity.

Akhenaten was a pharaoh of 18th Dynasty of the New Kingdom of Egypt.

The ancient Egyptian city of Tell el-Amarna (or simply Amarna) was the short-lived capital built by the ‘heretic’ Pharaoh Akhenaten and abandoned shortly after his death (c. 1332).

It was here that he pursued his vision of a society dedicated to the cult of one god, the power of the sun (the Aten) – seen as heresy at the time.

Akhenaten, upon becoming Pharaoh, ordered all the iconography of previous gods to be removed.

After his death, his monuments were dismantled and hidden and his statues were destroyed.

One of Akhenaten’s sons was Tutankhaten, who went on to become pharaoh and took the name Tutankhamun, one of the most famous ancient Egyptian pharaohs.