Archaeology: Rare Roman ‘highway’ and canal unearthed in the Netherlands

Via Giulia Augusta leading across the Pont Flavien in Saint-Chamas in southern France, is pictured above

They reached a height of around one-and-a-half feet (half a metre) in the centre.

While the Romans were famous for building roads in straight lines, the discovery of a road between Ribchester and Lancaster shows they also took the natural geography of a place into account, to avoid steep hills, for example.

Others are hidden under earth and have only been found thanks to Lidar.

For decades after the 43AD Roman invasion of Britain, a large region of the North, including what is now Lancashire, Yorkshire and Cumbria, was controlled by a Celtic tribe known as the Brigantes.

Roman writer Tacitus wrote it was the collapse of the marriage between Queen Cartimandua of the Brigantes – a Roman ally and her husband Venetius – that led to a showdown with Rome. 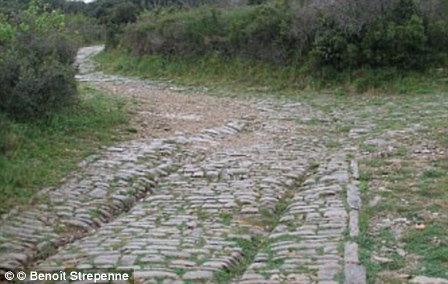 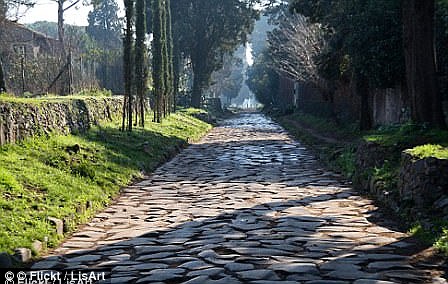 Roman roads were large structures, typically measuring 16 to 23ft (five to seven metres) wide. In the image above left, chariot ruts can be seen on the Via Domitia near Ambrussum. On the right, a view of Via Applia Antica

Following their divorce, Venetius organised a revolt in 69AD and Cartimandua fled.

The Emperor Vespasian then sent a force under Britain’s new governor, Quintus Petilius Cerialis, to put down the rebellion and conquer northern England.

Building roads to link up forts and settlements across this rugged landscape was a vital part of this decades-long conquest of the North.

The Romans purposefully built their roads to be very straight to make journey times as short as possible.

As compasses were yet to be invented, Roman surveyors used a piece of equipment called a groma – a wooden cross with weights hanging down from it – to help make the roads straight.

Many of the roads paved direct routes between isolated regions and towns.

This network greatly encouraged trade at the time as the travel time was slashed.

Research has found that many of the roads that have existed for millennia have formed the backbone of economic routes to this day.