The Archbishop of York has called on ministers to cut the ‘grotesque’ six week waiting time for Universal Credit payments.

Dr John Sentamu waded into the row amid fresh signs that ministers are preparing to make concessions over the benefits overhaul.

Critics have warned that as the roll-out of the flagship welfare reform gathers pace, the fact it is paid so far in arrears is contributing to rising debt and even evictions.

Ministers are understood to be listening carefully to calls for it to be reduced to four weeks, in line with salary payments.

Dr John Sentamu, the second most senior member of the Church of England, said the waiting period was leaving millions of people who are already in debt with ‘nothing to fall back on’.

Tory MP Stephen McPartland, a long-standing campaigner on UC, said he believed prospective rebels were ‘very, very close to getting a resolution’ on cutting the timescale.

Theresa May averted a Conservative revolt on the issue last week by promising to scrap charges of up to 55p a minute on phone helplines.

But she still had to order her MPs to stay away from a vote Labour on a non-binding motion demanding a pause in UC, rather than trying to defeat it.

Writing in the Sunday Times, Dr Sentamu said: ‘In the Bible, the hardest-pressed of all poor people were summarised as ‘widows and orphans’ for they were the group most at risk and with least support.

‘Our concern should be for their present-day successors whose essential outgoings are costing more and more and their incomes standing still or going down.

‘They fear Universal Credit, particularly because it seems to assume that everyone has a nest egg which will tide them over as they wait a minimum of 42 days for payouts.

‘That is grotesquely ignorant, for millions of people, especially those in need of support, are already in debt and have nothing to fall back on.’

A new analysis has blamed former chancellor George Osborne for undermining UC by making cuts to its work allowance element, which is the amount families can earn before their support is withdrawn.

The 2015 summer Budget cuts will put an estimated 340,000 additional people in poverty by 2020/21, according to the Joseph Rowntree Foundation.

This equates to a single parent working full-time on the National Living Wage being £832 worse off by 2022 than they would have been had the cut not been made. 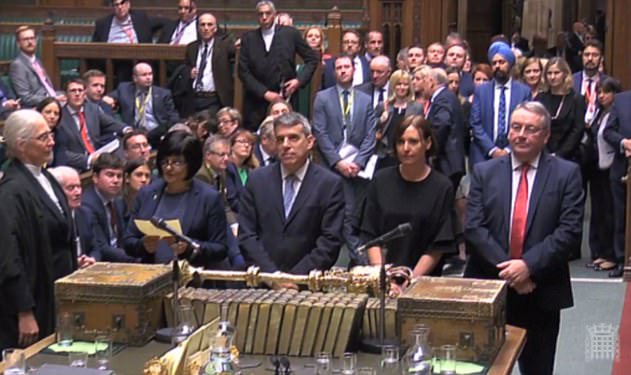 Theresa May suffered a defeat in the in the Commons last week when she ordered Tory MPs to stay away rather than fighting a Labour motion causing for UC to be paused. Pictured is Thangam Debbonaire reading out the 299-0 win for Labour 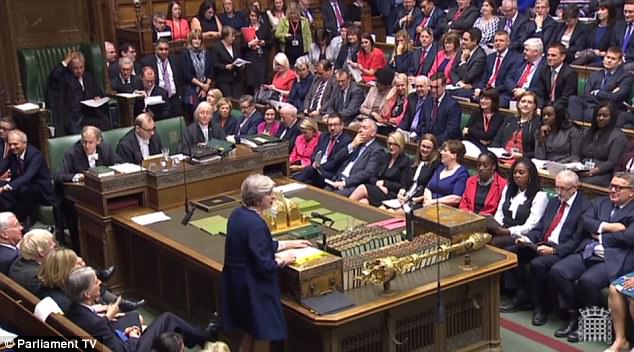 The equivalent figure for couples with a single breadwinnner working full-time is £468, prompting the charity to call for the work allowance to be restored to its original level, which would cost £1.2 billion for single parents and £900 million for couples with children.

Commons Work and Pensions Committee chairman Frank Field today said the Prime Minister must reform UC or face the Conservative Party being seen again as ‘the nasty party’, a phrase coined by Mrs May in 2002.

The government is facing questions about fraud after it emerged state pensions are being paid to 30 people aged over 100 in Yemen.

Concerns have been raised by Tory MP Philip Davies after ministers told him 2,860 people in the Arab state were receiving UK retirement payments in 2010 – even though there were only 2,667 British citizens living there.

‘Are there really 30 centenarians claiming a British state pension in Yemen?’ he said.

”It’s the only country in the world where there are more British state pension claimants than there are British citizens.

‘According to these figures, which are on record in the House of Commons library, not only does it mean that every single British citizen living in Yemen is a pensioner, but there are an extra 200 ghost claimants too.’

Writing in the Mail on Sunday, Mr Field said: ‘Unless she acts fast to defuse the political timebomb that is Universal Credit, she risks undoing many of the good things she has done. The Conservative Party will be seen as the nasty party once again.

‘I doubt Mrs May would have approved it in its current form had she been in Number 10 at the time. She will have seen by now that the six-week period of limbo under Universal Credit is pushing families to the brink of destitution.

‘To avoid any more political carnage on the home front, she needs to put it right. Fast.’

A Government spokesman said: ‘The Government remains determined to ensure that people joining Universal Credit don’t face hardship which is why we recently announced significant improvements to the system of advance payments that people can get get as soon as they get into the system.

‘As repeated this week, we will continue to monitor and take any actions if necessary. But no decisions or announcements on any further actions are imminent.’

Johnny Mercer, who was among a group of Tory MPs to meet Mrs May over Universal Credit last week, called the benefit a major tool in tackling poverty and said it was working in getting people into employment.

‘I think the phone number was a bit of an error, really, and the seven-day wait that’s built in, making it six weeks before someone gets their first payment, I think is quite difficult to ask people to do,’ he told Sunday with Paterson on Sky News.

‘My concerns around this have always been the same, particularly the two issues that I’ve just mentioned to you there.

‘And yes, we have seen movement on the phone line, which is good, we may see movement on four to six weeks, no one has given me that steer, but at the end of the day this is a modern, compassionate Conservative Party that wants to get these things right.’

He refused to be drawn on any assurances he had been given during his meeting with Mrs May, saying it was a private meeting. 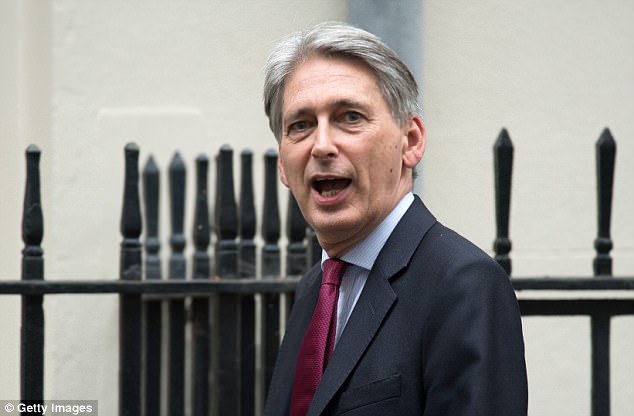