The blue heeler named Archibald lived with Constable McCrow, 29, and colleague Matthew Arnold, 26, at a police owned house at Tara in the state’s Western Downs region.

Both constables were tragically gunned down last Monday by a trio of conspiracy theorists as they approached a remote property on a job in the town Wieambilla 45 minutes away.

The pair were previously stationed together in Dalby and were fareweled together on Wednesday at a state funeral in Brisbane attended by 8,000 mourners – including family, friends, politicians, representatives from the FBI and NYPD, and a police honour guard a kilometre long. 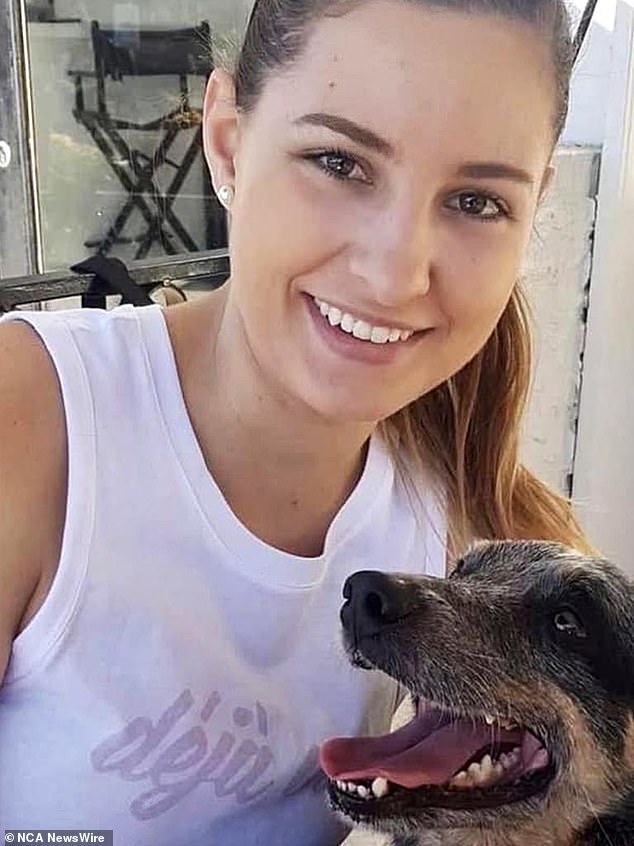 Archibald was front and centre among them, arriving in a police car with his head poking out the window. He was riding alone in the back with a driver and and officer escort in the front.

The dog has not seen Ms McCrow since the day of the shooting and did not bark or yelp, but instead sat quietly sat at the feet of Ms McCrow’s family inside the auditorium as the banner and flag parties entered in a sombre procession at 10am.

‘Blue heelers are people-orientated and love being with their owner and family’, according to breeder website Heelerinfo.

‘They are considered in the top 10 smartest dog breeds. They can be very empathetic… This ability to read body language also shows itself in a their natural guarding instinct.’

Neighbours in the town of Tara had become used to seeing Archibald in Ms McCrow’s yard.

Late on the afternoon she was shot, child care worker Jodie Eckhart said she heard there had been an incident and ‘somehow knew’ it involved McCrow when the dog started howling as night fell and the young constable failed to return home after her shift.

‘I just knew something was up,’ Jodie told Daily Mail Australia. 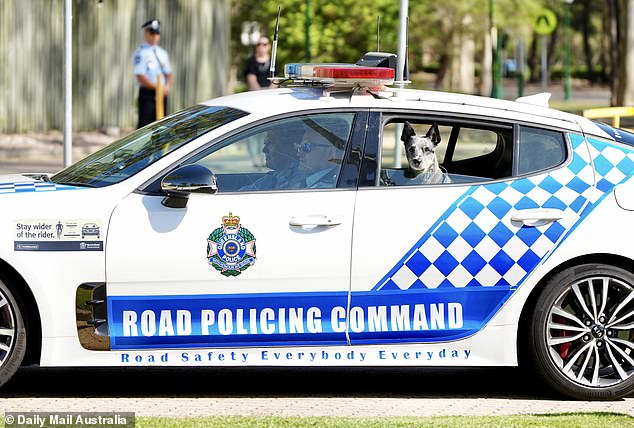 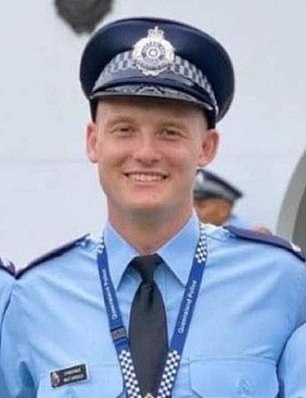 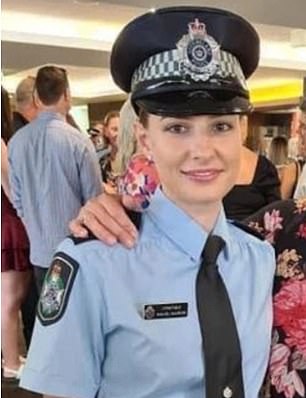 A funeral service with full police honours will be held today for Queensland constables Matthew Arnold, 26, and Rachel McCrow, 29

Constable McCrow’s former partner, Luke, told local newspaper the Country Caller she was the type of person who would ‘do anything for you’.

‘I’m absolutely shattered and I don’t just speak for myself but I speak for everyone because Rachel was just a beautiful person,’ he said.

‘You can’t take that away from her and she just didn’t deserve this at all.

While Senior Constable Melissa Gibson described ‘my mate Rach’ as a ‘cheeky larrikin who loved a laugh, loved a good prank and loved a good meme, often at our expense’. 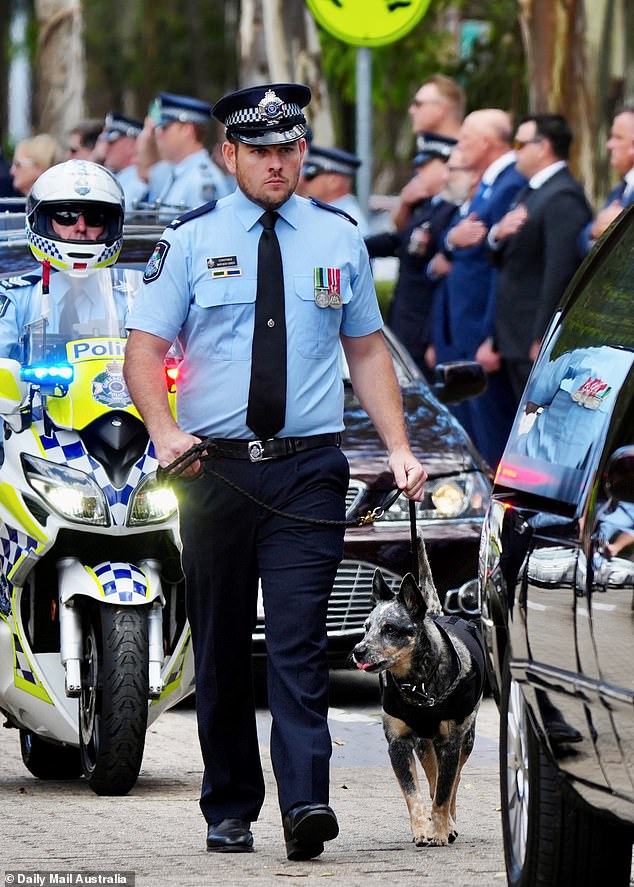 Archibald, escorted by a police officer, follows behind a hearse carrying Ms McCrow 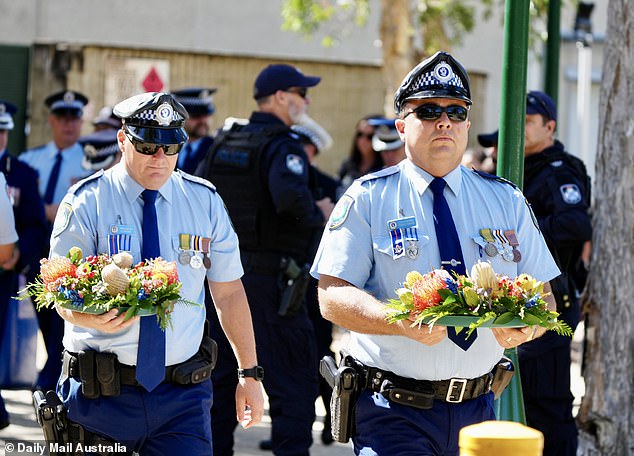 And Constable Freddy Hartigan said McCrow was ‘the sort of police officer the world demands… a copper with fairness, respect and love, a copper who deeply cares, a copper with a strong sense of justice’.

As the service got underway, Pastor Jeffery Baills said: ‘Matthew and Rachel are side by side together today.

‘They worked together, they served their community together. Sadly they died together. 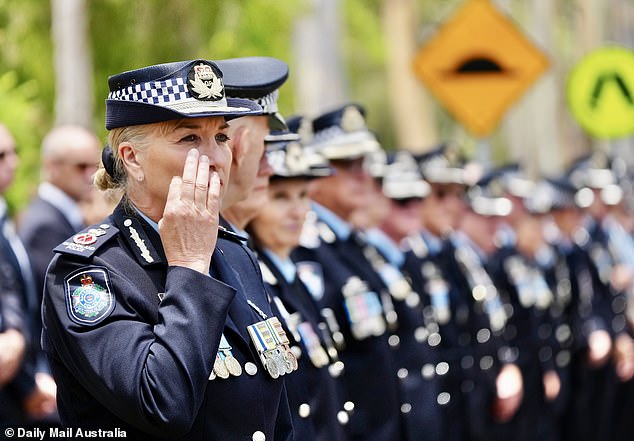 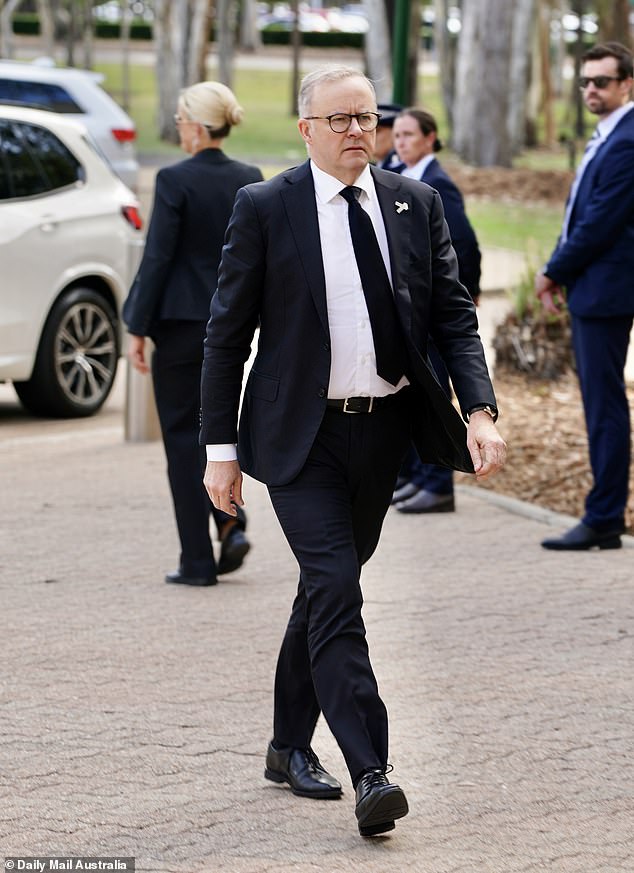 The slain police officers have each been posthumously awarded three medals, the national medal by Governor General David Hurley and the National Police Service Medal and the highest police honour, the Commissioner’s Valour Award.

Following the ceremony, mounted police, members of the dog squad, a police pipe and drum band and officers in police cars and on motorcycles will form a guard of honour on the road outside.

Private funeral ceremonies for each of the McCrow and Arnold families will be held following the public memorial. 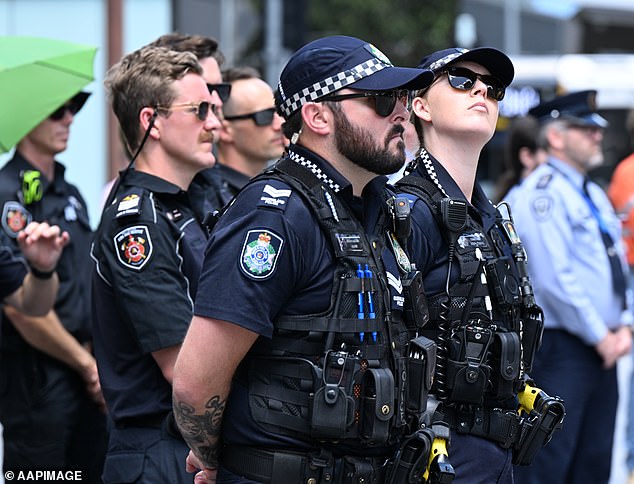