Prince Harry and Meghan Markle’s son Archie has been heard making an adorable comment in his American accent in the coupe’s £88million Netflix documentary.

The Duke and Duchess of Sussex’s eldest child has appeared throughout the first three episodes of the couple’s new TV series released this morning.

In the second episode, Prince Harry, 38, is seen taking his three-year-old son for a walk in an area that appears to be near their home in Montecito in California.

As Archie walks ahead of him, Prince Harry is heard singing Heigh-Ho from Snow White.

Elsewhere, the toddler is seen happily walking along a path with the family’s black labrador before telling his dad: ‘Archie is running away!’

It then jumps to a clip of the father and son back at their home, where Prince Harry is admiring some hummingbirds.

‘We won’t get a chance to be this close to hummingbirds ever again,’ Harry tells his son. As Meghan films them both, Archie asks: ‘Why?’

Despite asking his son to stay quiet and watch the wildlife, the toddler then exclaims: ‘I’ve got a dirty foot mama because I was with you!’ 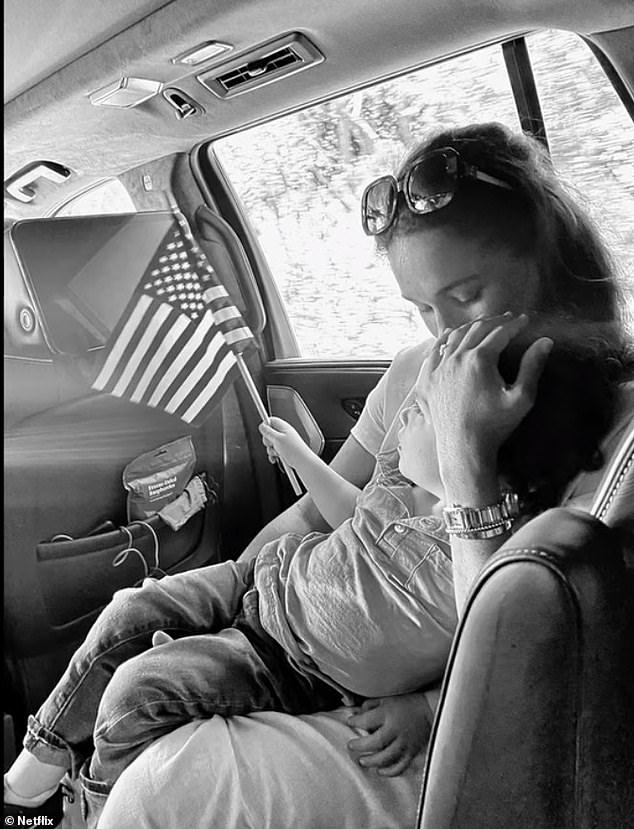 Trying her best to stifle her laughter, Meghan tells him: ‘You’ve got a dirty foot, sweetheart. Papa is a birdwatcher so this is a really big moment for him.’

The docu-series then jumps to a clip of Harry reading a storybook to their son on the sofa.

Earlier in the episode, the duke says off-camera: ‘My son, my daughter, my children are mixed race and I’m really proud of that.

‘When my kids grow up and they back look at this moment and they turn to me, they say, “what did you do in this moment?” I want to be able to give them an answer.’

In the first episode of the series, the Duke and Duchess of Sussex shared a snap from their son Archie’s first birthday. 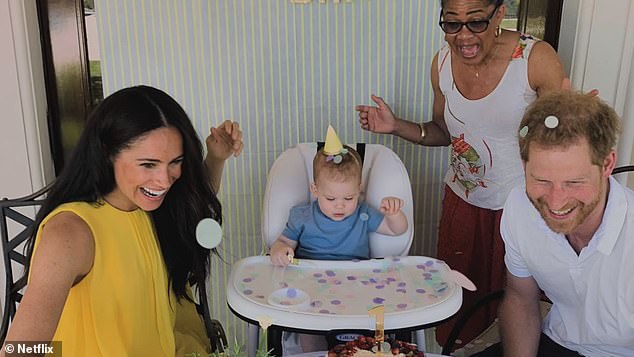 The image of the family celebrating their little boy’s big day is among the first royal fans have seen of Archie because the couple have been notoriously private about him.

However in the first episode of their new £100 million Netflix documentary, they shared a series of photographs and clips of Archie, including the little boy seeing snow for the first time.

Highly personal clips of the little boy show him running on the beach, footage of Archie at their home and the couple snuggling up with the toddler.

In one clip, the little boy described a sunset as ‘beautiful’.

In another moment, he can be seen running along as the couple walk around the grounds of their $14 million mansion in California.

Meghan said: ‘We’ve been really conscious about protecting our kids as best we can and also understanding the role they play in this really historical family.’

Another clip shows a baby Archie being rolled around on a suitcase at home, while in another Meghan discusses putting the babies down for the night.

The couple had been reported to have tried to push it back to 2023 despite the streaming giant paying them a rumoured $100million (£88million) for the fly-on-the-wall series.

In the bombshell documentary:

There have been mixed reports, with the royals reportedly ‘at odds’ with the production staff on their Netflix docuseries because the ‘panicked’ couple want to make ‘such extensive edits’ that the team believe the project could be ‘shelved indefinitely’.

King Charles and Prince William are poised to issue a ‘swift and robust’ response to any unjust claims in Harry and Meghan’s series – but William and his wife Kate are not likely to watch it themselves, sources have said.

Senior royals are said to be bracing for the worst and will be prepared to address any unfounded accusations as the new series dropped on the streaming service at 8am.

The Duke and Duchess of Sussex have already made a number of claims in two trailers released by Netflix in recent days, saying they had no protection from the Palace and accused aides of actively leaking and ‘planting’ stories against them as part of a ‘dirty game’.

But the Royal Family believe the series will actually by slim on new revelations. 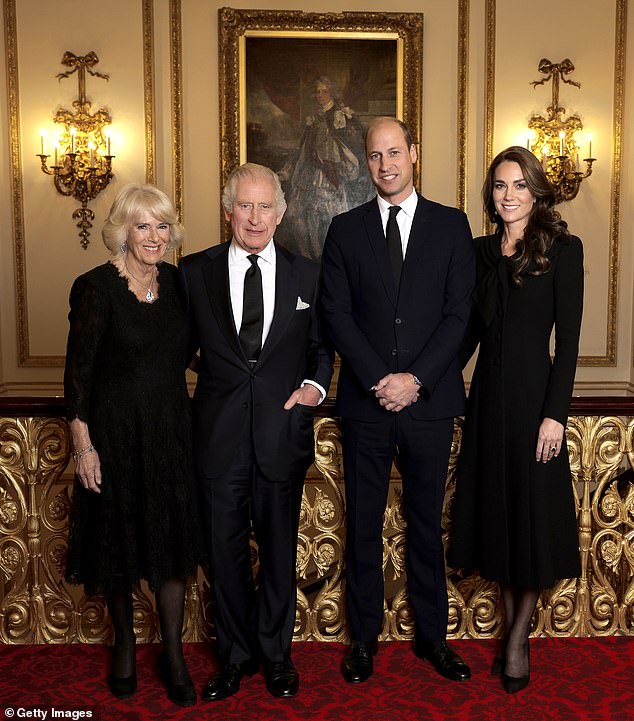 Officials from both Buckingham and Kensington Palace will watch the first three episodes of the series this morning.

Meghan Markle’s mother Doria Ragland reveals she instantly knew Prince Harry was ‘The One’ for her daughter because of his good manners, red hair and handsome looks

‘Our engagement was an orchestrated reality show… it was rehearsed’: Harry and Meghan lift the lid on their relationship