An architect has transformed a narrow building site into a luxury family home that looks like a ‘living screen’, complete a ‘vertical’ tiered garden and an above-ground swimming pool that reflects sunlight into the house and often casts rainbows onto the kitchen and living room floors.

When clients asked father-of-three Clinton Cole to design an upscale house on a plot of land just nine metres wide in North Bondi, Sydney, in 2016, he knew he would need to use clever techniques to make the property feel wider and brighter than its dimensions.

The result is a stunning four-bedroom split over two storeys with Balinese-inspired bathrooms, a long outdoor pool, sun deck, spacious terraces at the front and rear, underfloor heating and even a small ‘cinema’ theatre.

Each of the four bedrooms overlooks a garden of flowers and shrubs planted in panels along the exterior walls, bringing a sense of nature indoors and creating the illusion that the inanimate building is ‘alive’.

‘We used the ‘living screen’ to provide light and outlook to greenery, but most importantly to screen neighbouring windows to prevent overlooking issues,’ Mr Cole told Daily Mail Australia.

The house of living screens: Sydney architect Clinton Cole created this stunning family home on a nine-metre wide site in North Bondi in 2016 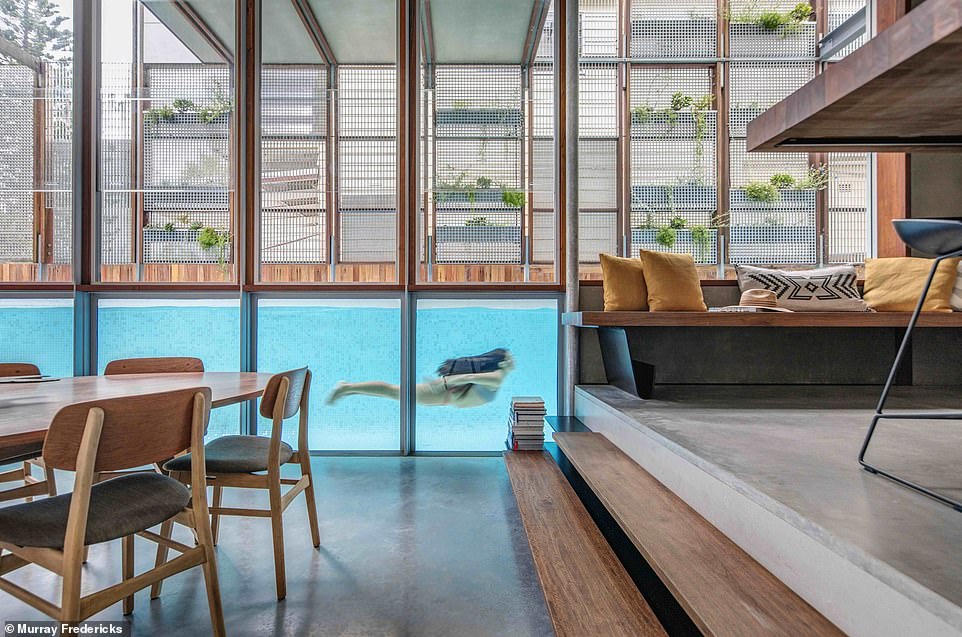 Neighbouring houses towered above the site on both sides, dwarfing its size and eclipsing any natural light that would have otherwise illuminated the inside.

Mr Cole solved that problem by building the raised lap-pool directly against the floor-to-ceiling window of the living room, which draws a reflection of sunlight from the water.

‘The result is quite spectacular in terms of the light and shadow that play throughout the day,’ he said. 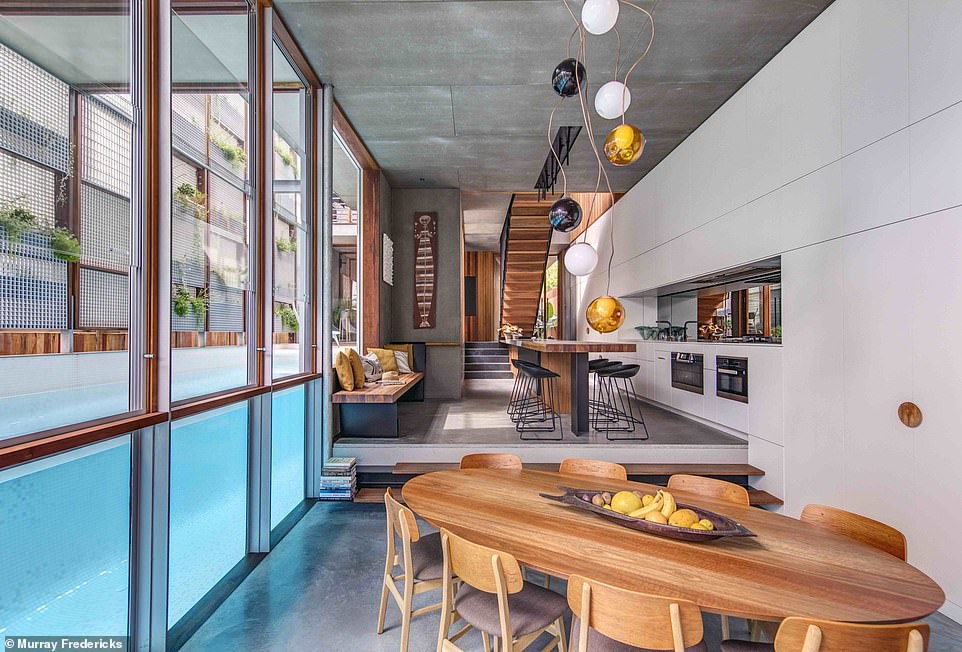 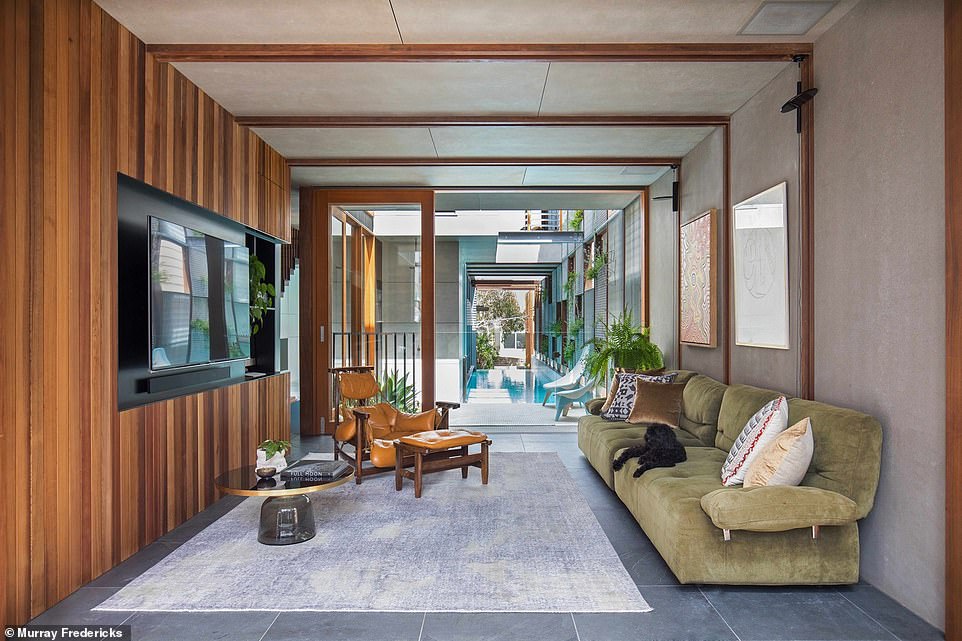 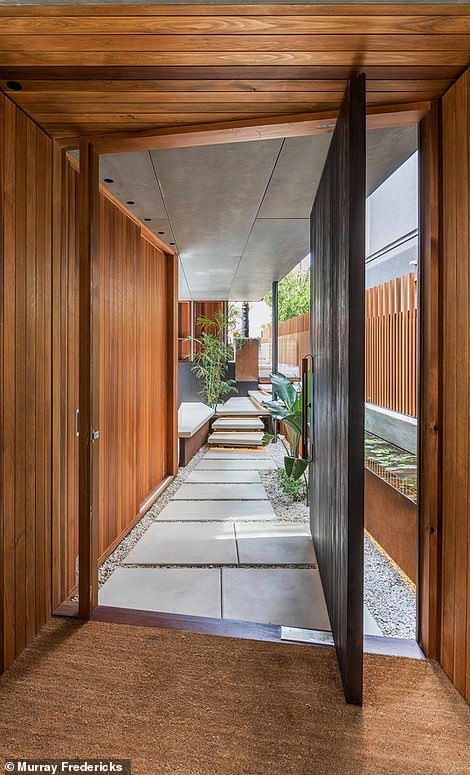 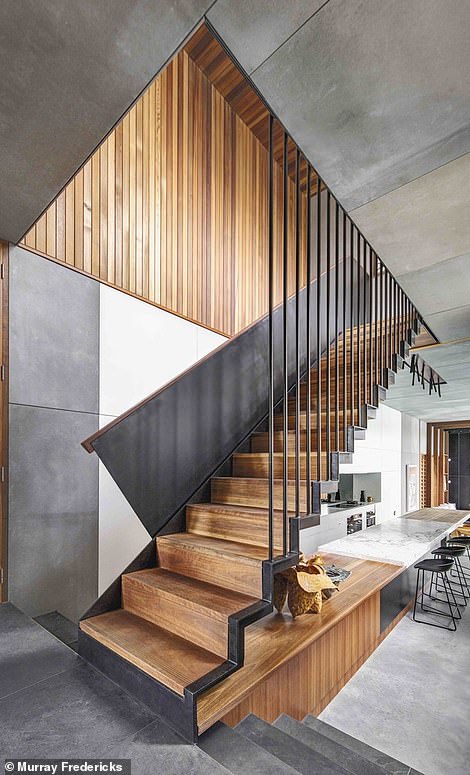 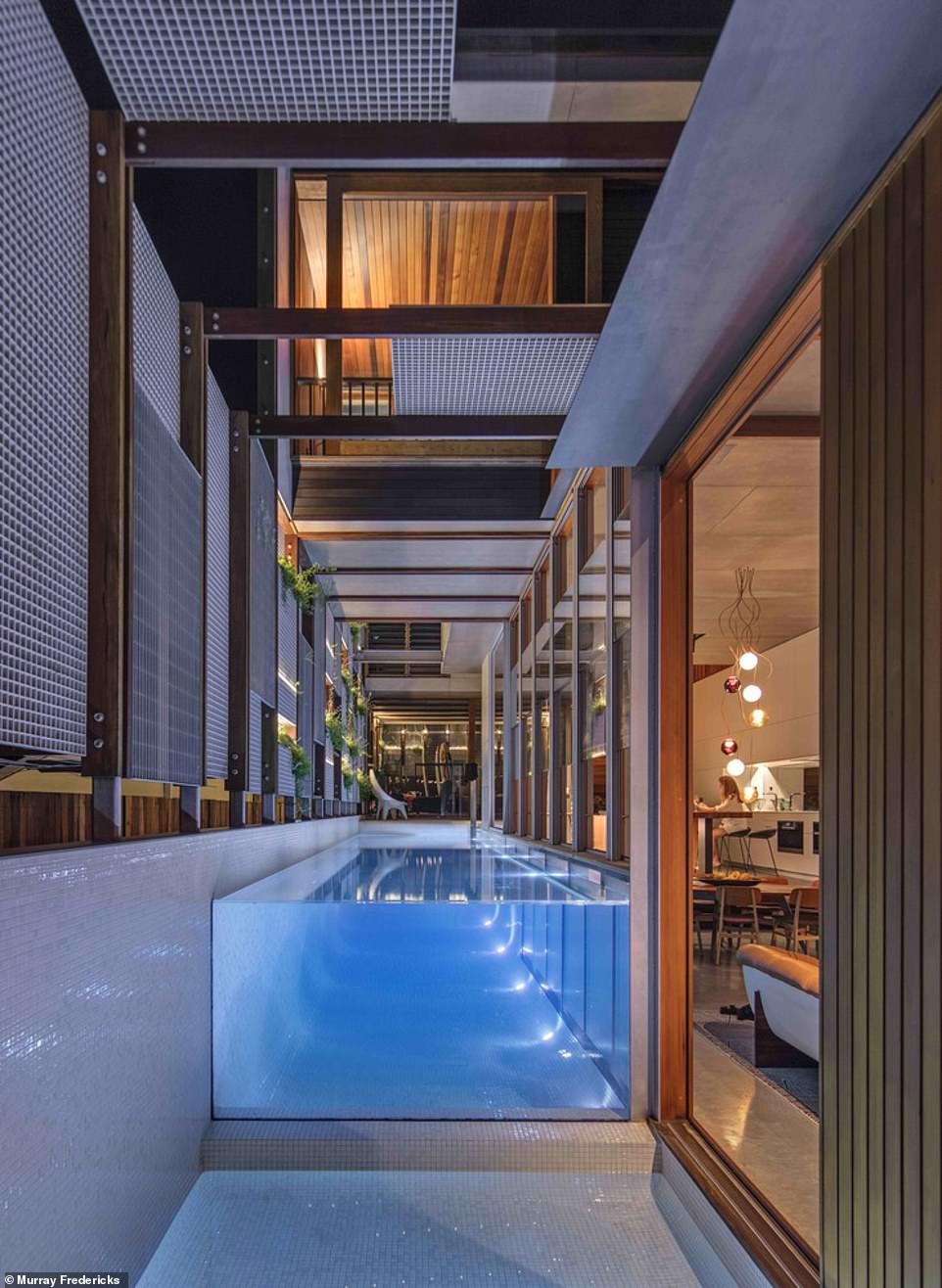 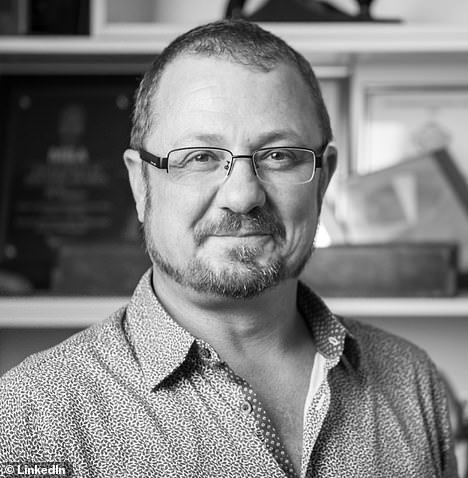 The living room connects to a spacious kitchen and dining area and an outdoor patio, providing ample space for entertaining which was the main request from Mr Cole’s clients.

He developed the concept of the ‘vertical’ garden when his clients’ second request for ‘leafy green’ space could not be accommodated on the ground within the confines of the narrow nine-metre site.

‘They had a strong desire for a leafy green outlook from the living spaces so we used the [screens] to resolve this requirement,’ he said.

The house is fitted with timber panels and concrete, with steel columns running between the outdoor screens purposely left exposed to ‘celebrate’ the complex structure of the garden.

The house is fitted with a state of the art ‘Home Automation System’ synced to an app on phones and tablets, which allows residents to programme lights, water temperature, underfloor heating and heated towel rails to suit the changing climate throughout the year. 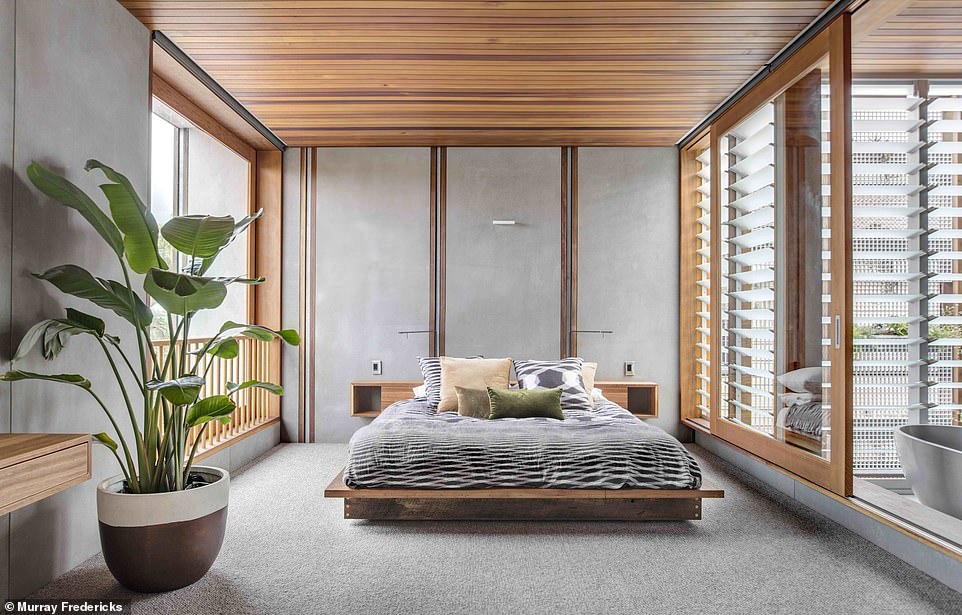 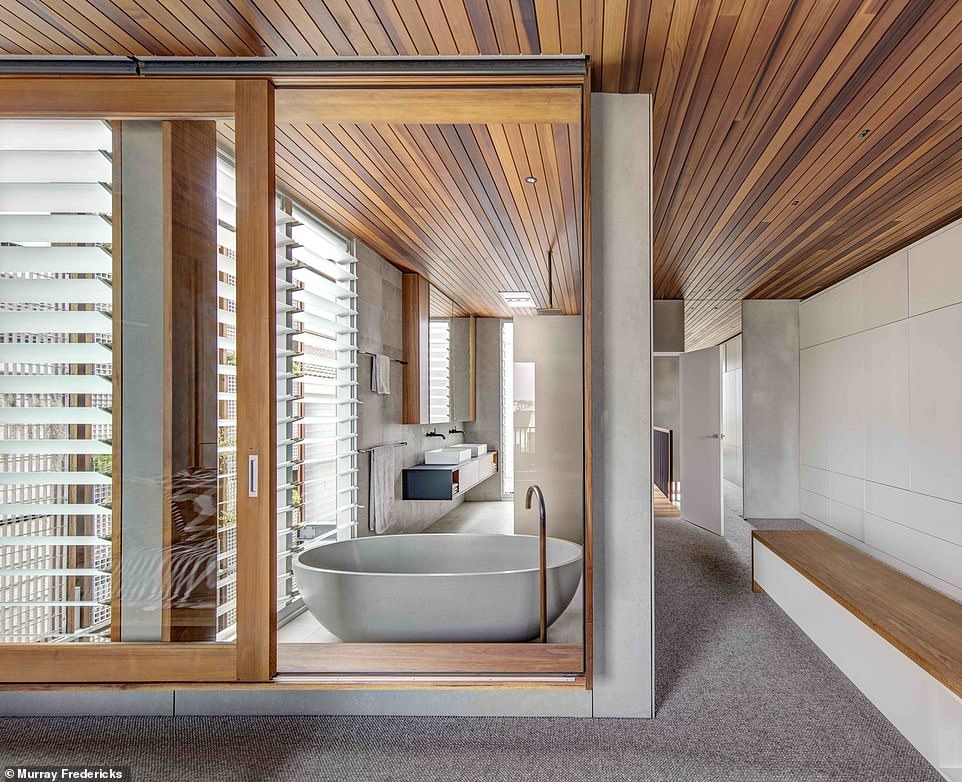 One of the two bathrooms upstairs, complete with a free-standing Balinese-inspired tub 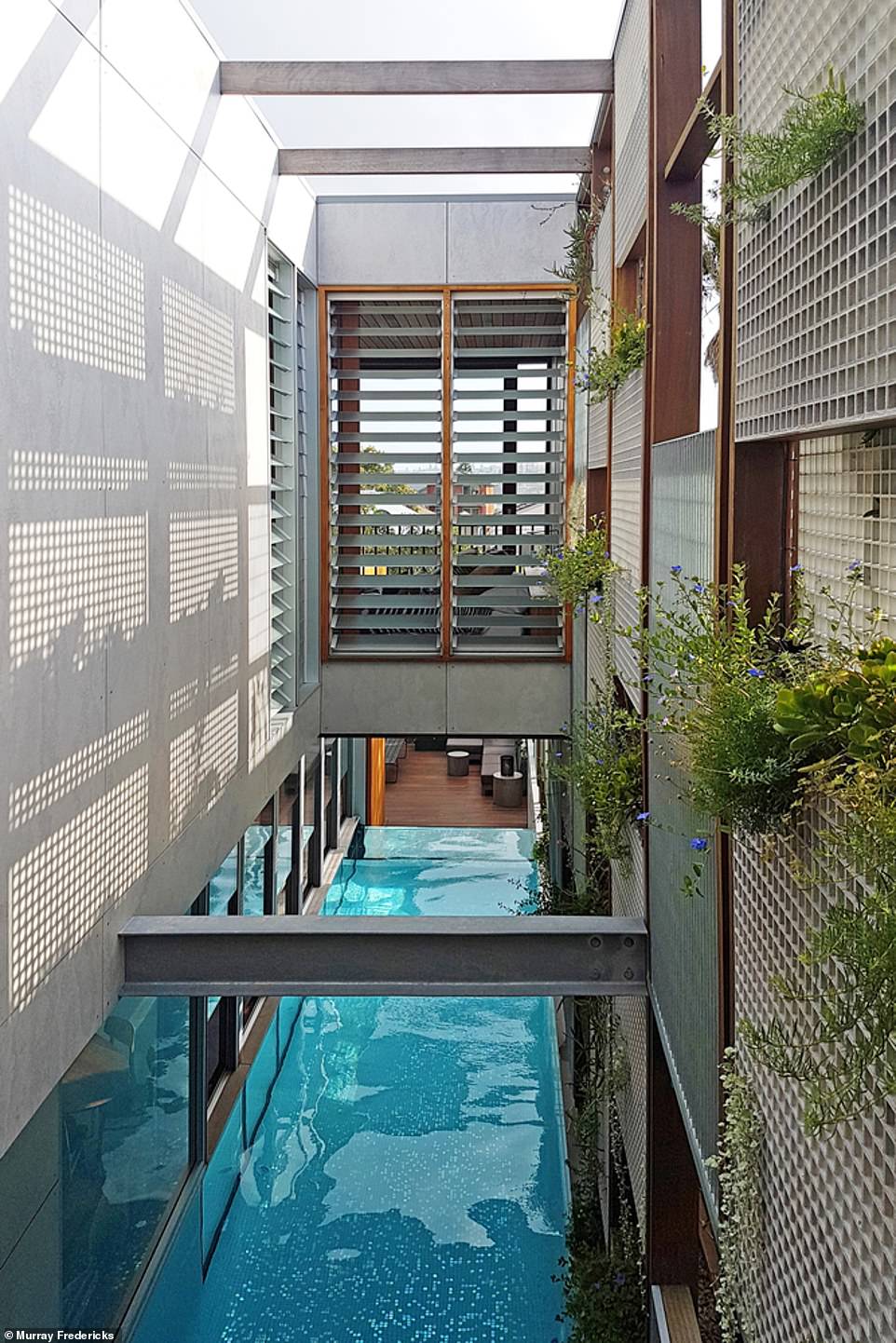 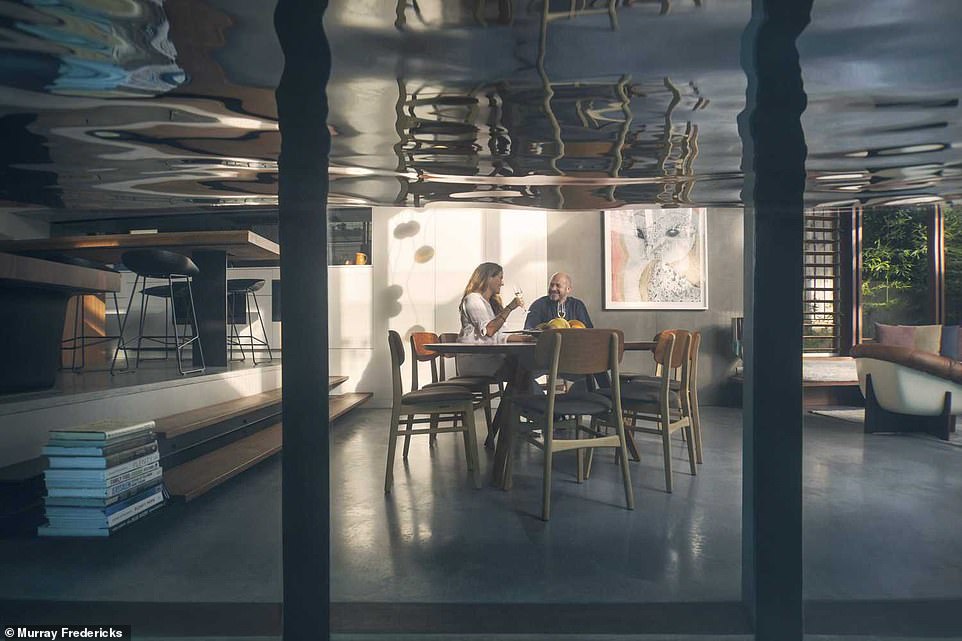 The property won a 2018 Good Design Award and was shortlisted for a sought-after World Architecture Festival and Houses Award.

The family who commissioned the house and have lived in it since 2016 say it has ‘well exceeded’ their expectations.

Mr Cole did not disclose the cost of the project and its worth has not been valued at current market rates.