A winter chill that hit Texas and Louisiana is moving up into the northern US during the holiday weekend.

The severe weather dumped more than 10 inches of rain in parts of Texas and Louisiana, and now the storm system is moving up north towards the Dakotas, Minnesota, Wisconsin and Michigan.

The region is expected to be hit in the next 24 hours with an estimated 6 inches of snow to celebrate the Easter weekend. 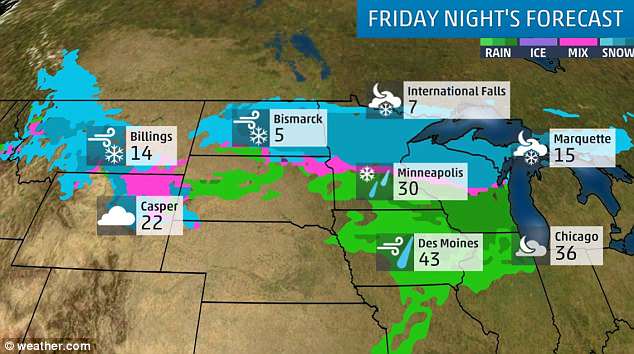 States in the north – such as the Dakotas, Minnesota, Wisconsin and Michigan – will experience lower temperatures with severe wind chill

The jet stream to guide the chilly weather spans from the northern Rocky Mountains all the way into the Northeast, the Weather Channel reports.

Storm systems that are formulating this weekend have potential to follow that stream from the west to the east coast, bringing cooler temperatures with it.

Lower temperatures than usual are expected in the North and Midwest.

Bismark, North Dakota, which had already seen the beginnings of snow flurries on Friday morning, is anticipated to hit a low of 5 degrees.

With the dangerous wind chill expected, this could drop the area to up to 25 degrees below zero.

The storm system is then anticipated to move into the East Coast towards the end of the weekend.

Areas around New York City, Philadelphia and Boston could experience lower temperatures and a wintery mix of snow and rain on Monday after the holiday.

The chilly air and lower temperatures is anticipated to linger in the Northeast into the second week in April. 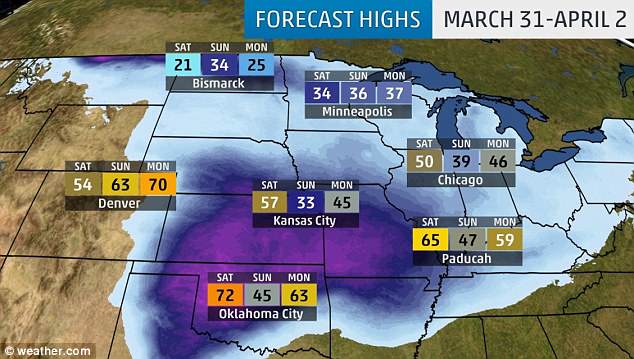 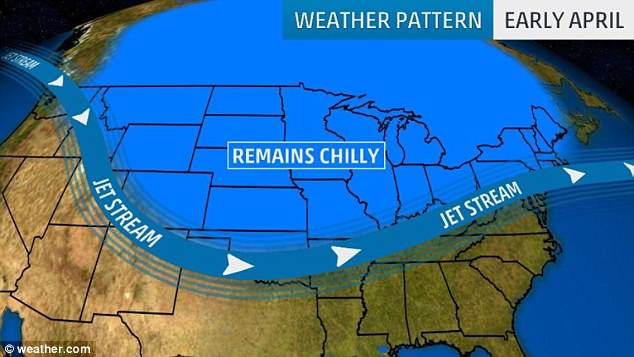 The wind chill will move into the East Coast on Sunday into Monday. Areas such as New York City and Boston could see a wintery mix of snow and rain