The Arctic fox lies listless in a cramped wire cage, its blank, red eyes sunk deep into the fleshy folds of its face, and its body distorted by the huge rolls of fat under its glossy fur.

It’s hard to imagine a more pitiful contrast to its life in the wild where these sleek, beautiful creatures roam free across many miles of frozen tundra each day in search of prey.

Footage of a playful cub, diving repeatedly into the snowdrifts as it learned to catch lemmings, memorably charmed TV viewers when it was featured in the Sir David Attenborough nature series, Life Story. It is an existence that this poor specimen — and the millions of other foxes kept on Finland’s fur farms — will never know. 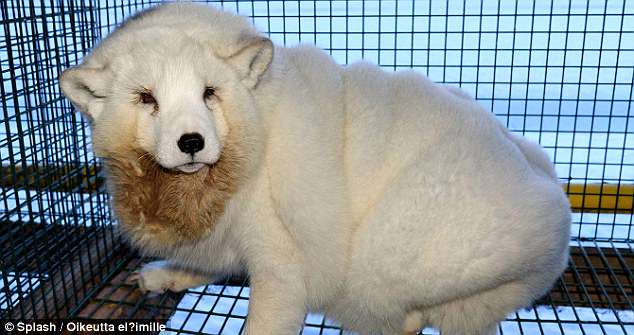 Shocking pictures show monster fur farm foxes bred to a dangerously unhealthy size, all so that their pelts will be larger and fetch more money when sold after the animals are killed 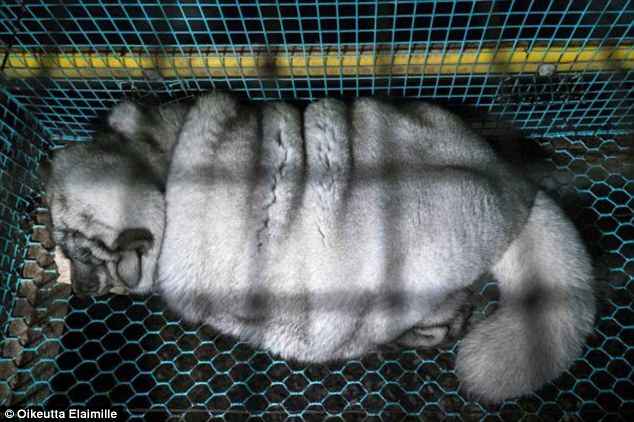 They spend their entire life in cages, some afflicted by painful health problems, before being slaughtered and then skinned so their prized pelts can be turned into expensive coats and fashion accessories.

More than 100 million animals are killed for their fur every year. And while the UK banned fur farming 15 years ago, blinkered shoppers are still able to buy imported pelts.

Indeed, next week, MPs will debate a petition signed by a number of academics and conservationists, including Chris Packham, that calls on Parliament to ban sales outright. Currently, some two million pelts are imported into the UK every year.

Over the past five years more than £2.5 million of fur items have been imported into the UK from Finland, according to PETA (People for the Ethical Treatment of Animals), while luxury labels — including Louis Vuitton and Prada — are reported to use, or have used, fox fur in their clothing and accessories.

At the less expensive end of the market, fox fur may be spotted in the smarter High Street outlets in the form of fluffy keyrings or pom-pom charms for handbags which can cost around £50.

Campaigners have been calling for fur farming to be banned in Finland, as it has been in many other European countries, including the UK, Austria, the Netherlands, and in the Czech Republic from 2019 onwards.

But these ‘super-size’ foxes — which reach 40lb, five times their weight in the wild — are so big they can barely move and, according to the Finnish animal rights group, Justice for Animals, represent a sickening new low in an abhorrent industry.

The group has released the images taken last year by its undercover investigators on five farms in the remote Ostrobothnia region in western Finland, where the majority of the country’s 900 fur farms are located.

It claims they are evidence of intense breeding by genetic selection to produce a strain of ‘monster’ foxes which grow bigger pelts.

Some of the biggest males are being kept as breeding stock, with their sperm used to artificially inseminate the bigger females which have produced litters, the group says. ‘The farmer makes more money from larger pelts, but the animals pay the price in suffering,’ says Kristo Muurimaa, of Justice for Animals.

One of the team that filmed the foxes said: ‘The farms are depressing places. Some foxes howl, bark and scream. Their claws chink against the mesh floors and walls as they pace round and round in their cages. Some hunch, still and silent.

‘I felt helplessness, pity and grief when I looked in their eyes. I see a fox that is unable to be a fox. The only thing these foxes can do is to wait for death.’

The farmed Arctic fox cubs are born in May, in litters usually of five or six, and kept with their mother for the summer in a cage with a nest box before being weaned — and fattened. In the wild, Arctic foxes add 50 per cent to their natural weight of about 8lb each autumn, building up layers of fat when food is plentiful, to sustain them through winter when their prey, including rodents and birds, is harder to find.

In captivity, however, they are fed on a gloopy feed made of pulped fish and offal that is high in fat.

The foxes are kept in rows of cages in long sheds exposed to the elements — but that is the least of the problems as winter arrives. Their coat is highly insulating and allows them to survive temperatures as low as -50c in their native environment in Alaska, Canada, Greenland, Russia and Scandinavia.

They grow two versions during the year, with the summer coat — thinner and dark grey or brown — replaced by the luxurious, thicker white winter coat that camouflages them in snow from predators such as wolves.

But while it helps them survive in the wild, that glorious fur is also the animal’s curse, coveted by furriers. 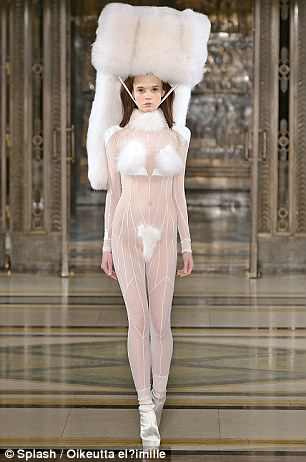 Fashion brands including Louis Vuitton and Prada are reported to use, or have used, fox fur in their clothing and accessories

By December, the farmed foxes’ winter coat has developed and their lives are brought to a premature end. Steel tongs are used to grab them by the neck, then one electric probe is placed in the animal’s mouth and another in its anus.

Under European legislation, the lethal shock must be a minimum of 110 volts, and last for at least three seconds to ensure swift death. The slaughtered foxes are stripped of their fur by skinning machines.

Most fur produced in Finland is sent to Saga Furs, a marketing brand and auction house in Vantaa, near the capital Helsinki. In an auction last August, the largest pelts sold for ¤90 compared with ¤48 for the smallest.

According to the Finnish Animal Welfare Act, ‘animal breeding, or use of breeding methods which may cause distress or significant damage to the health or welfare of the animal, is prohibited’.

There are regular random inspections of farms, and those which fail to comply with regulations face losing their licence. But the new evidence suggests the system is failing.

After seeing the photographs, Kati Pulli, a vet and a director of the Finnish Federation for Animal Welfare Associations, told the Mail: ‘Sadly, it doesn’t surprise me as I have visited fur farms and we saw some [foxes] as big as these.

‘Typical health problems include bent legs, which may be the result of being overweight and lack of exercise. Little research has been done into this, but it makes it difficult and possibly painful for them to move.

‘The folds of skin on their body might cause skin inflammation and their eyelids may become loose. They may have red or pink eyes because of infections, which are contagious.’

Under Finnish regulations, the minimum cage size is less than 0.8 square metres, so movement is very limited. There is nothing in the cages apart from a stick for the foxes to bite on, and a wire mesh shelf, Ms Pulli adds.

‘These are wild, predatory animals and it’s very unnatural for them. Digging is a need for them, and if they were given an area with sand it would improve their welfare and they may show some of their natural jumping and play behaviour.’

She says some foxes show abnormal behaviour, repeating the same movement such as walking back and forth.

‘They do it because it releases endorphins [stress-relieving brain chemicals]. It is distressing to see,’ Ms Pulli says.

Despite a successful campaign in the Nineties led by PETA and fronted by supermodels, including Naomi Campbell, with the slogan ‘I’d Rather Go Naked Than Wear Fur’, the fur industry today is booming.

According to the International Fur Federation, it was worth £29 billion in 2015, up from £11.6 billion in 2011. It remains particularly popular in Italy where it featured prominently at the recent Milan Fashion Week.

In Finland, around 2.4 million foxes (all species) were produced for fur on its farms in 2016. Only China, where animal welfare legislation is all but non-existent, produces more fox fur. What’s more, China has recently been buying most of Finland’s fur, followed by Russia. 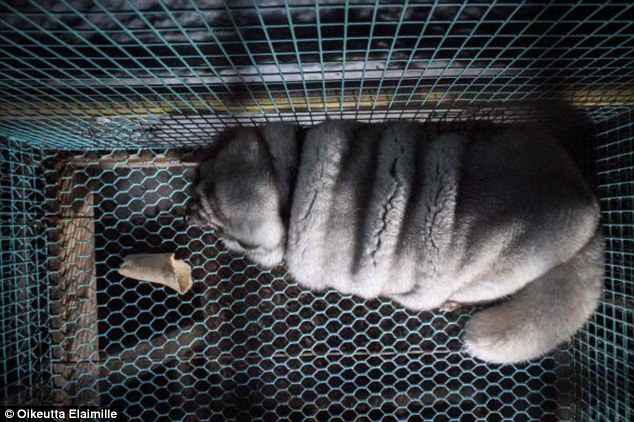 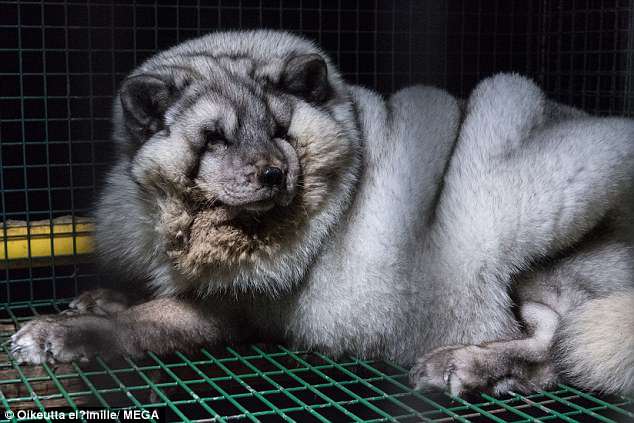 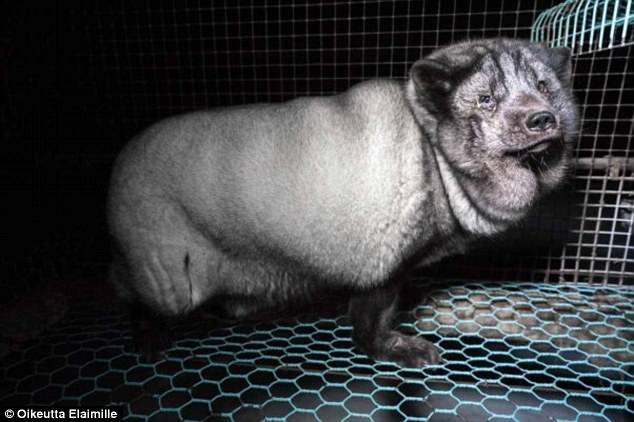 According to Finnish organisation Justice for Animals, the skins of the animals produced by Saga Furs are sold to high end fashion brands

Fur farming in Finland was worth ¤350 million from exports in 2016, according to Pro Fur, the Finnish Fur Breeders’ Association, which claims its pelts are ‘the best in the world’.

Finnish fur products are also sold in flagship boutiques of companies such as Louis Vuitton, which lists a variety of fox fur clothes on its website, including an Arctic fox gilet for £4,500.

Louis Vuitton is among dozens of brands, including Prada and Miu Miu, listed as customers on Saga Furs’ website.

None responded to the Mail’s request for comments.

Burberry declined to comment on the record when asked if it bought from Saga Furs, or if a jacket with an Arctic fox fur collar advertised on its website uses Finnish Arctic fox.

But a source said: ‘Burberry will not use fur or exotic leathers if there is any concern that they have been produced using unacceptable treatment of animals. There was no real fur in the September 2017 collection.’

The company says it has a responsible sourcing policy which places limitations on the type and origin of furs used in Burberry’s collections. British designer Pam Hogg was once listed along with photos of an eye-catching design (basically a big hat and three blobs of fur covering the model’s decency) from her ‘The Emperor’s New Clothes’ collection at London Fashion Week in 2013.

When contacted by the Mail, Miss Hogg said she would be asking Saga Furs to remove her name and photos of her work from its site as she has never bought any fur from them.

‘Saga gave me the fur a long time ago. I wasn’t aware that they were using my work as an example. I have to say that I am upset about that. I have never bought from them and I no longer use fur.

‘I haven’t done so since the collection five years ago. Any fur used after that would be faux fur.’

Pro Fur and Saga Furs both said they don’t condone the breeding of oversized or sick animals.

Marja Tiura, managing director of Pro Fur, said: ‘In August [2017], five farms who had overweight foxes were reported to the authorities.

‘We checked the farms, and no overweight animals were found and the facilities were well maintained. We take this very seriously.’

‘For 12 years, Saga Furs have had a certification scheme in place. The farm certification system requires higher animal welfare standards above those recommended by the EU. We reserve the right to abstain from selling pelts that do not comply with current legislation,’ she says.

Since the publication of the distressing images of the Arctic foxes last year, Saga Furs says it has engaged additional vets and agreed to re-double its efforts to inspect all farms and practices, with any non-compliant farm losing its certification.

These words, however, ring hollow with anti-fur campaigners.

‘Animals aren’t prize marrows that you can blithely “grow” to huge sizes for gain — and these foxes are suffering mightily,’ said PETA director Elisa Allen. ‘It’s no shock that it’s now breeding obese animals to squeeze more fur and more money out of its victims.’

Meanwhile, Justice for Animals claims the industry’s response amounts to little more than a self-serving PR exercise and continues to call on luxury companies to stop using real fur and switch to the ‘cruelty-free alternatives’.

At the very least, it hopes anyone who has seen its disturbing pictures of ‘supersize’ Arctic foxes will think twice if they’re tempted to buy a fox fur coat.