As the impacts of climate change march on, peak volumes of sea ice continue their downward spiral.

According to NASA, this past year was no exception to the rule. This winter, the peak volume of Arctic sea ice receded enough to tie the seventh lowest level of all time.

NASA data shows the maximum extent of the ice peaked at 5.7 million square miles which is 332,000 square miles below the average maximum between 1981 and 2010.

To put that number in perspective, the loss is the same as missing an area larger than the state of Texas, according to NASA.

Arctic sea ice sinks another year even despite a minor reprieve of record declines. This winter, the peak volume of Arctic sea ice receded enough to tie the seventh lowest level of all time

In January,  a study of glaciers on Baffin Island in Canada, show that this century has been the warmest one in about 115,000 years.

Scientists say that even though this year’s decline didn’t rise as far into the record books — since 2015 decreases have continued to set new highs — the trend over time is definitive.

‘The temperatures in the Arctic were a bit higher than average and we saw a lot of ice loss in the Bering Sea, but nothing this winter was as extreme or dramatic compared to recent years and the record lows,’ said Melinda Webster, a sea ice scientist at NASA’s Goddard Space Flight Center in Greenbelt, Maryland.

While 2019 represents a reprieve from recent record breaking years, the sheets are far from recovery, says NASA.

‘While this year wasn’t a record low, the maximum extent still points to there being a sustained decline in winter sea ice,’ continued Webster.

For the Arctic, steady melting has stretched beyond the seasonal ice ebb and flow of ice and into trends once considered static. 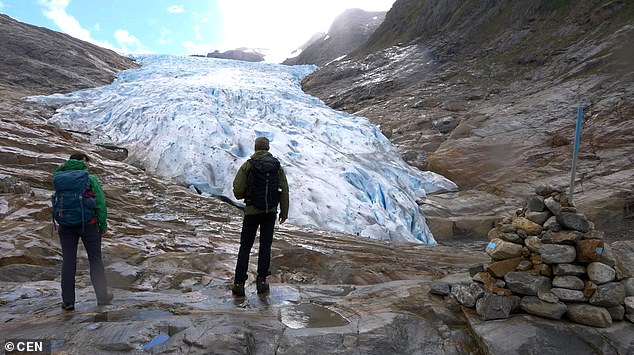 Seasonal ice melts more easily than older ice in the ‘pack’ – a class that has all but faded away according to NASA.

Arctic ice has traditionally undergone seasonal changes, with a great deal of ice melting in warmer months only to return during the winter.

In recent decades, however, scientists have noted that upon return, the volume of ice has been declining steadily.

The so-called ‘ice pack’ which used to contain older and more solid ice has almost disappeared according to the agency.

About 70 percent of the pack now consists of seasonal ice according to a 2018 study led by Ron Kwok, a sea ice researcher with NASA’s Jet Propulsion Laboratory.

The announcement from NASA comes on the heels of a recent report from the U.N. that foreshadows substantial temperature rises that will likely accelerate trends in the Arctic, sea level rise, and affect as many as 4 million people.

WHAT ARE THE EFFECTS OF LOWER SEA ICE LEVELS?

The amount of Arctic sea ice peaks around March as winter comes to a close.

NASA recently announced that the maximum amount of sea ice this year was low, following three other record-low measurements taken in 2015, 2016 and 2017.

This can lead to a number of negative effects that impact climate, weather patterns, plant and animal life and indigenous human communities.

The amount of sea ice in the Arctic is declining, and this has dangerous consequences, NASA says

NASA researcher Claire Parkinson said: ‘The Arctic sea ice cover continues to be in a decreasing trend and this is connected to the ongoing warming of the Arctic.