Are 20-somethings making bigger sacrifices to get on the ladder?

‘I’m working two jobs as a personal trainer and a cleaner to save for a home’: How first-time buyers are making sacrifices to get on the ladder?

Property has once again become a political football ahead of the general election next week.

The major parties have promised a number of schemes to help people onto the ladder, but many are already making big sacrifices in order to give themselves a leg-up to buy their first home..

One example of such an aspiring first-time buyer, Kim, who asked for her surname not to be used, told us how she has taken on two jobs in order to save for a home and despite this, it is unlikely she’ll be able to buy in the area she is currently living.

The 28-year-old is not alone. Nearly one in five wannabe homeowners have also had to take on two job roles, the research shows.

It suggests a number of other sacrifices, including borrowing money from family members, selling valuable belongings and buying a house with friends, according to Engen Group.

The firm – which focuses in part in targeting spots in the country for affordable housing – found that, of those people not living in a family member’s home, 57 per cent claim to make sacrifices to help pay for their housing costs.

One per cent claim they had to stay in a relationship for the sole purpose of buying a property.

Other steps people have taken to buy a property include borrowing money from family, which 16 per cent have done, whilst six per cent sold items they were emotionally attached to.

‘I work six days a week’: 28 year-old saving for her first home

Kim, 28, has taken on two jobs to save money towards buying a house.

She said: ‘I’m a personal trainer and also run my own cleaning company which I have done for the last year and a half.’ 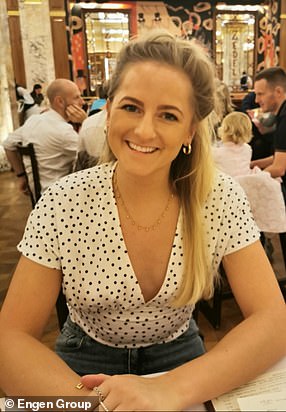 First home: Kim has had to take on two jobs to try and save for her first property

She decided to start up her cleaning company after realising she wouldn’t be able to afford to save for a property whilst living in London working only one job.

‘I got to an age where I started thinking about buying a house and how I was going to do that.

‘I realised that where I was living and my job wasn’t providing the right capital.

Kim, who lives in South West London,  admitted that working two jobs is hard work but says the struggle is worth the outcome.

‘I find it stressful, it is a lot and I have to be very organised. Sunday is my day off but I still have to organise the week ahead.

‘However, over the last six months I have felt a bit more comfortable financially.’

She currently saves between £300 and £500 each month, depending on how much spare cash she has.

Of that amount, £200 goes into her Help to Buy Isa, which is the maximum monthly allowance, whilst the rest goes into a savings account.

‘Life is so expensive in London so I don’t think I will be buying a house here.

‘Hopefully in a year and a half I will be able to buy there.’

Aside from saving into an Isa and a savings account, Kim has made other sacrifices to be able to purchase a property.

‘I have given up buying clothes and reigned that in a lot in the past year. I have also stopped going out as much and eat in a lot more.

‘I’m also conscious of not buying food every day and being a bit savvier with my money.’

She admitted that although she has been religiously saving, she may still have to ask for some money from her dad to help her out – much like many other millennials in her position.

‘In London, I’m forking out huge amount of rent each month so I may have to ask my dad for financial help.’

Buying a house with a sibling or relative and borrowing money from a friend is also popular with three per cent admitting to this. Another two per cent have bought a house with a friend.

Potential buyers have also been found to be cutting down on certain expenditures in order to save money.

Some 43 per cent say they go out to eat less but, more worryingly, four per cent claim they have also cut back on buying medicine and medical treatment.

Another 13 per cent say they were cutting back on exercise costs, such as going to the gym or booking classes whilst 15 per cent said they were trying to cut down on heating costs.

A further 35 per cent said they are cutting back on taking holidays whilst 38 per cent are buying less clothes.

Other measures taken include selling valuable items with 7 per cent claiming they have done this.

Much of the struggle to save for a home has come from runaway property prices with the average property price in England standing at £251,000 as of September 2019, according to figures from the ONS.

House price growth in the UK has generally slowed since mid-2016 but has increased dramatically since it hitting a post financial crisis low in April 2009 when the typical home was £154,452.

A deposit is typically 10 per cent of the property’s value, however, many homeowners choose to put down a bigger deposit at first to give themselves cheaper monthly repayments and get a better mortgage deal.

Regionally, Yorkshire and The Humber was the area with the highest annual house price growth in the last year, with prices increasing 3.2 per cent.

The lowest annual growth was in the North East, where prices fell 2.9 per cent.

However, it is not just millennials who have had to potentially make sacrifices in order to purchase a house – many older generations believe they had it just as hard with less government support to boot.

For example, in the last decade we’ve had Help to Buy and Lifetime Isas giving a government top-up on money saved.

It is also the case that many baby boomers had to live at home with their parents until they saved up enough money to move out on their own – and that may of also included taking second jobs to reach their goal.

Engen commissioned the research company Consumer Intelligence to interview 1,029 people across the UK on their housing situation.

Graeme Boiardini, chief executive of Engen Group, said: ‘Getting a first step on the property ladder is a dream for many, but our research shows the sacrifices people have to make to achieve this.

‘Once they are on it, many clearly continue to make sacrifices to pay for their housing costs.

‘As the population increases, the need for affordable and sustainable housing has never been greater.’