Are developers inflating prices of homes sold through Help To Buy?

When 27-year-old Lee Gornall and his fiancee Paige Augar saw posters for a block of new-build flats just around the corner from her grandmother’s house in Catford, South East London, they thought their prayers had been answered.

With a wedding planned for next year, they are desperate to get on the housing ladder and start building a home for their two children, Macy, seven, and Ruby, two.

But, like thousands of young couples, train driver Lee and Paige, 26, an NHS administration worker, have watched in horror as house prices have rocketed so much that their salaries and savings won’t even stretch to a two-bedroom flat in the area, where prices have hit £320,000 on average.

Although the two-bed property in the advertisement for the Excalibur development in Catford, where they both grew up, would set them back £425,000, it said they could use the Government’s Help To Buy scheme.

This provides a huge boost to first-time buyers by offering extra funding from the state, so young people can afford more expensive homes than they could normally.

The couple were sold on the idea when an adviser at an event put on by Kinleigh Folkard & Hayward, the estate agent marketing the development, looked at their joint income, spending habits and savings and told them they would have no problem getting a mortgage.

But when Lee and Paige finally visited the apartments a few weeks later, their hearts sank.

The living room was so small, it would be a squeeze to fit in a three-seater sofa. And the second bedroom, which Macy and Ruby would have to share, looked more like a small office or box room and certainly wouldn’t be big enough for two beds and the girls’ toys and clothes.

Lee and Paige couldn’t believe how much they would have to pay for a 762 sq ft space in an unpopular part of town — particularly compared to the prices of other properties nearby. 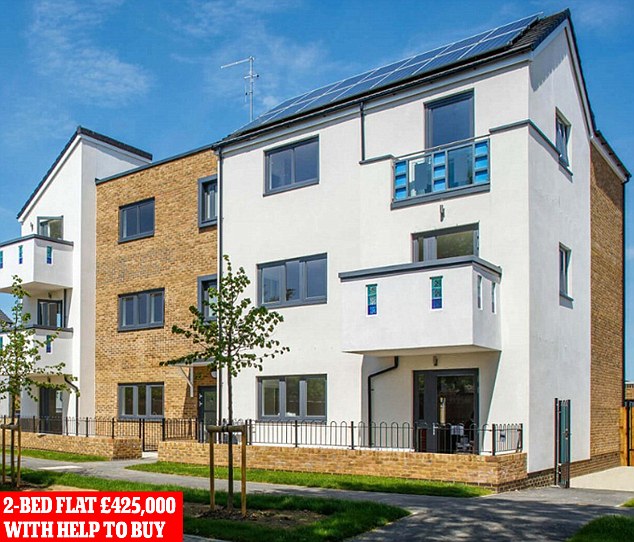 Paige says: ‘The apartments were being marketed as luxury living in a great central location, close to Catford train station, with great bus links and fantastic schools. But we’re from here and we know that none of those things is true.’

We have been told by industry insiders that homes being sold under the Government’s Help To Buy scheme are routinely overpriced by as much as 15 per cent.

The experts say property firms are trying to cash in because they know first-time buyers who use Help To Buy can borrow much more money.

The scheme, launched in 2013 to help young people get on the housing ladder, provides an extra 40 per cent loan from the Government to buyers in London or 20 per cent to buyers outside the capital.

This is on top of a mortgage from a bank or building society and means buyers can put down a deposit of as little as 5 per cent.

When combined with their savings and financial help from family, that gave them enough to reach the £425,000 asking price for the Catford development.

Lee and Paige started to get cold feet when they tried to arrange a second viewing. The agent they had been dealing with at Kinleigh Folkard & Hayward said the company was no longer marketing the properties and advised the couple to contact the developer, the London housing association L&Q.

When they told L&Q that they were worried about the price of the property, they were offered £13,500 cashback. 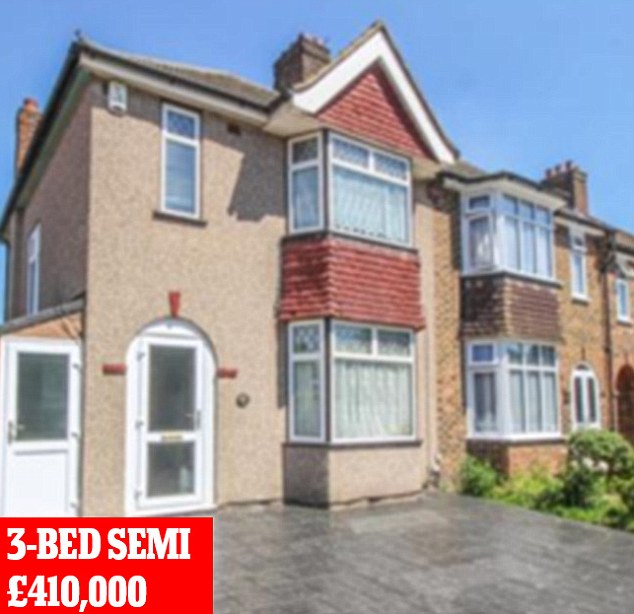 Almost double the size: The 1,330 sq ft three-bedroom family house with a garage, garden and drive is on the market for £410,000

It was a tempting offer: the cash would go straight into their bank account and they could spend it on whatever they liked. But, for Lee, it was the final warning sign that this could be a poor deal.

‘It just didn’t feel right,’ he says. ‘Why would they be offering us so much money if the flats were fairly priced in the first place?’

‘Developers know that first-time buyers are prepared to pay high prices for a new home out of desperation to get on the housing ladder,’ he says.

‘But many young couples will just be thinking about getting their foot in the door without realising the consequences of overpaying — and I’m worried what’s going to happen to them further down the line.’

Money Mail spoke to a number of senior directors at property firms who said they had real concerns first-time buyers were being lured into a trap.

Three property market experts separately told us that Help To Buy new-build homes were being priced 15 per cent higher than they should be.

If the experts are correct, young families will run into trouble when they decide to move. For example, say you buy a house for £450,000 that is 15 per cent overpriced.

If prices don’t rise, when you come to sell, the next buyer could receive a new valuation of £382,500.

If you had borrowed 95 per cent of the property price to buy your home, you would be on the hook for £427,500 to pay back the bank and the Government, less any mortgage you’d paid off so far.

So not only would you lose your deposit if you sold your home, but you would end up using a big chunk of the savings you’d put towards your next one. Experts say further evidence that Help To Buy properties are being priced too high is the difficulties that owners will have finding the next buyer.

In all likelihood, they will be selling to a much smaller market in a few years. This is because the Help To Buy scheme is only available to buyers of new homes — so, when owners come to sell, their property will no longer qualify. 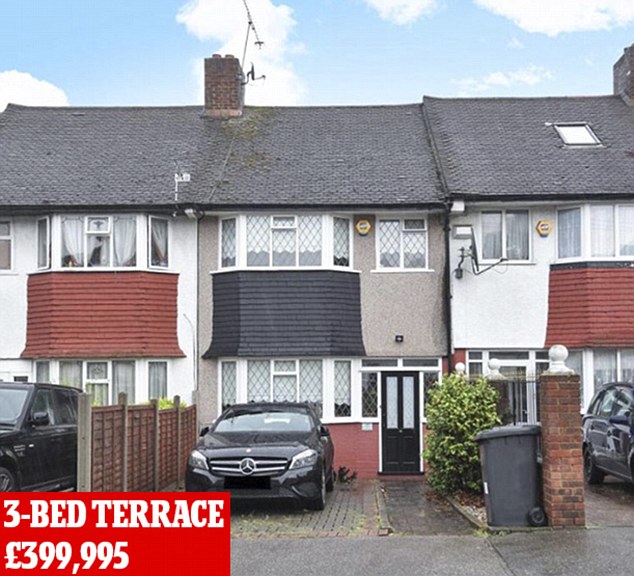 Also on the market: This  840 sq ft three-bedroom mid-terrace home with a driveway and garden is on the market for £399,995

That means anyone interested in buying the house must be able to afford it without the huge financial boost from the Help To Buy scheme.

As such, the price could be out of reach for many first-time buyers.

Insiders say a warning sign property developers are trying to get away with selling overpriced homes is the battle they are facing with valuers.

When a house is being sold, it has to be valued by an independent valuer. The valuer will base their decision on the type and size of the property and other similar sales in the area.

If the valuation comes back lower than the developers’ asking price, the developer will be unable to sell the property.

In theory, this should stop builders flogging homes for more than they are worth. However, in practice, many are refusing to drop their prices, say experts.

Instead, they simply shop around until they find a valuer who will agree to the price they want. Money Mail has been told that, in some cases, developers are asking three different valuers for their opinions to get the highest price.

One new-build sales expert says she has received nine valuations lower than the builders’ asking price in the past month. ‘This is a major problem on some of the developments we’re working on,’ she says. ‘It’s got so bad, one developer has taken to banning certain valuers from valuing their homes because they refuse to match their asking prices.’

Another way builders are convincing buyers to purchase overpriced homes is by offering to pay their legal fees and stamp duty, or handing out cash bonuses worth tens of thousands of pounds.

These sweeteners were common leading up to the 2007 financial crisis, when a booming housebuilding market meant competition to sell homes was fierce.

The cashback, which can go towards offsetting the buyer’s mortgage or into their bank account for moving costs, was a way of making one home look more attractive than a similar one a few miles away. Often, builders did not tell valuers when incentives had been offered.

But the concern with these deals is that the only way a developer can afford to offer cashback without eating into their profits is because the gift is factored into the price.

Homeowners who bought new-build homes with the Help to Buy equity scheme will miss out on the cheapest rates when the time comes to remortgage.

Though 29 lenders currently accept Help to Buy loan applications to buy a home, the picture looks very different for those whose initial deals are up and need to remortgage to avoid slipping onto higher rates.

Help to Buy homeowners remortgage with some or all of their government equity loan still in place can only choose from a restricted pool of lenders – meaning they could miss out on the cheapest rates.

Just 10 lenders are prepared to accept a remortgage application from Help to Buy borrowers looking to switch from another lender, meaning some homeowners may be better off leaving Help to Buy altogether and taking a standard 95 per cent mortgage.

Mortgage lenders cracked down on incentives in the months after the housing market collapsed to stop builders pricing homes higher than their real value and using cashback deals to gift borrowers their deposits.

But experts are now saying these incentives have made a comeback since Help To Buy was launched.

Mr Montlake, of Coreco, says: ‘Incentives should be banned because they suggest the purchase price is inflated and trick buyers into thinking they are paying a fair price for their home. When they come to sell it, it could be worth less than the mortgage they have to pay back.

‘Not only would they lose their deposit, but they’d have to use their own savings to pay back any mortgage shortfall.’

Lee and Paige feel lucky they didn’t take the £425,000 deal. But, for now at least, they have had to put their home ownership dreams on hold and carry on renting.

The couple say they desperately need the financial boost Help To Buy offers, but their experience of the Catford development has left them wary.

Paige says: ‘We feel stupid that we almost got sucked into paying so much for our first home, but how are first-time buyers like us supposed to know any different?’

John East, director of land and new homes at Kinleigh Folkard & Hayward, says the company was instructed by L&Q to market and sell the flats while they were being built. Once the show flat was completed and L&Q was able to set up a presence on-site, the developer took over the sales process.

On the pricing of the scheme, he says: ‘Agents are sometimes invited to provide advice on pricing of new development properties, however the final asking prices are ultimately determined by the developer and set in-line with comparable new developments in the area, as was the case with the Excalibur development.’

A spokesman for L&Q says that the Excalibur development includes a mix of housing types, including those to rent at below the market price, such as social housing, as well as shared ownership arrangements and homes for sale.

It says as a not-for-profit organisation, all the money it makes is reinvested into building homes and maintaining its existing ones. It says it is proud to be a long-term partner in the neighbourhoods where it works.