Are retro football shirts outselling replica ones this year?

I can fondly recall my favourite ever replica shirt. It was the Southend United home one from the mid-1990s, dubbed the custard splat kit by our long-suffering fans.

While I have no idea what has happened to mine, and I’d be a good few sizes too big for it now, it brings back great memories, despite the fact it constantly pops up on lists of the worst football shirts of all time.

I wasn’t surprised last November when a company, World Retro, launched a version of it in time for Christmas for £35, a great little stocking filler for Shrimpers fans.

As the club explained: ‘The shirts are ”retro’ rather than ‘replica’ – due to image/copyright regulations original manufacturer logos cannot be used on the shirts.’

Retro appeal: Many football fans are snapping up kits that remind them of better times – for me, it’s reliving my youth as a Southend fan and this custard splat shirt so horrific, it’s beautiful

They are not as good as the real thing, but do a job for those who do not want to fork out £60-plus for the latest shirt (although, I did buy both the home and away shirt this year as it was made by Hummel and it looks fantastic, even if we have now gone non-league).

I should also add that I waited for them to go in the sale before purchasing – but that’s just the money journalist in me.

With the latest European tournament in full swing, the move towards retro gear has been clear to see in the streets, outside stadiums, at the pub, and plastered on that all-important sales tool: social media.

I had a friend over to watch England’s first match, the Croatia game, and he turned up in a retro version of the England mid-80s red kit that was clearly not the real thing.

‘It’s far cheaper than buying the latest shirt that looks like a PE kit,’ he told me.

This week, Consumer Trends looks at our shift towards retro football shirts and just how popular it has become. 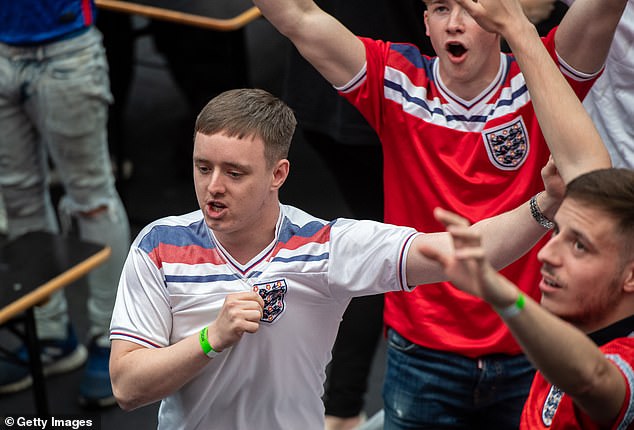 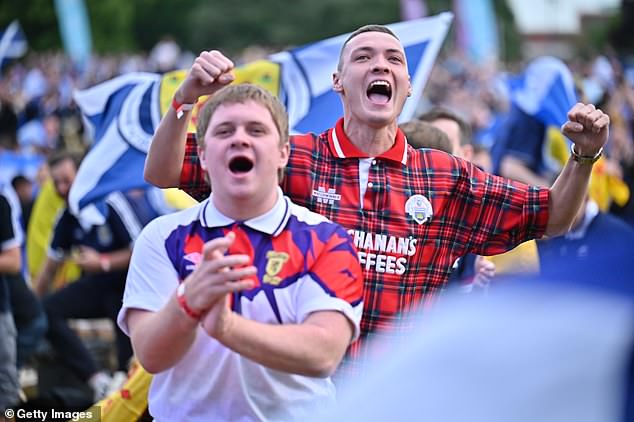 Buying these retro versions of kits are firstly cheaper than the new shirt, but also easier than trying to nab a second-hand real version, which can trade for big bucks online – especially in the run-up to a tournament like this.

Profit from the retro revival

In my book Never Go Broke, we write about the retro revival and how you can cash in on it.

We also give tips on how to sell items properly in the second-hand market, including clothing, which you can then choose to put in a segregated pot to enter the resale game.

There is also a section about popularity – that is, cashing in at the best time to maximise profits, like a major football tournament.

The average selling price of a second-hand football shirt is up 25 per cent on last year, averaging £40 for a pre-loved jersey – £8 more than in 2020.

It could be time to cash in on an old shirt that you don’t want anymore, with interest sky-high.

Emma Grant, head of pre-loved at the online marketplace, said: ‘The Euros are back and purchases for football shirts are on the up.

‘We know that fans want to stand out from the crowd when supporting their team with purchases for vintage shirts at an all-time high.

‘With the average selling price on these unique shirts ticking up throughout the competition, if you have one in your wardrobe it’s time to dust it off – you could make big money when you sell it on.’

Some of the rarest and most iconic shirts can go for upwards of thousands, with a Manchester United Shirt from 1963 selling for £3,499 this month. 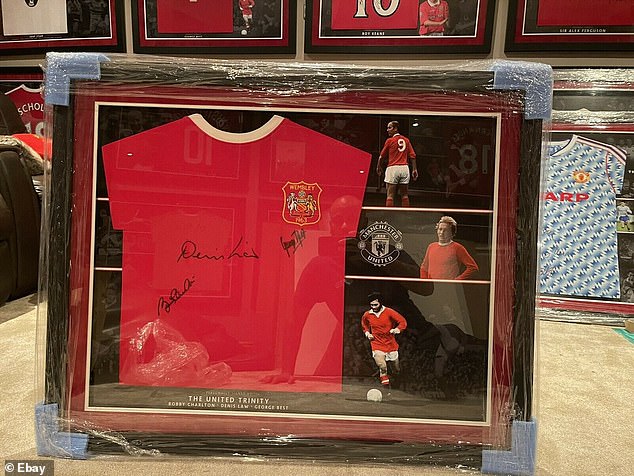 Big business: This shirt (which of course will remain inside its frame) sold for more than £3k earlier in the year

Depop told me that it has seen a significant rise in searches for football shirts this summer.

A spokesperson added: ‘It indicates an increased appetite for second-hand, pre-loved or vintage football shirts, as a credible alternative to buying brand new.

‘Our community comes to Depop for our unique, one-of-a-kind inventory, and it’s great to see football fans embracing this for the Euro 2020 tournament.’

This summer, we’ve seen a significant rise in searches for football shirts. It shows an increased appetite for secondhand, pre-loved or vintage football shirts, as a credible alternative to buying brand new.

More generally speaking, searches for ‘football shirts’ on Depop have increased by 40 per cent since April, with searches

Searches specifically for ‘England football shirt’ rose 195 per cent month-on-month and notably, the term was the third most searched in the UK between 4 and 15 June.

After the Sunday win Three Lions against the Croatia team, ‘England football shirt’ jumped to number one spot in searches for the 13th-15th, accounting for 32 per cent of total searches in the UK, indicating that retro football fever has firmly gripped the nation.

Second-hand app Vinted has seen a similar surge of interest. It says that 10,000 shirts have been listed in the UK and it believes many are being snapped up by collectors.

Natacha Blanchard, consumer lead at Vinted, said: ‘In general, people love to collect. We collect things for a variety of reasons, some people collect as an investment, some for the sheer pleasure they derive from it, others to show that they’re true fans.

‘But above all, collecting items is about the thrill of chasing. And when your fandom is taken to the next level, you’re not only collecting new shirts from your favourite sports team, you now also want shirts from the past, from classic games or other unique, vintage items related to this particular team.’

She also believes that the internet has opened up the ability to go retro, and that many of its shoppers are also keen on sustainability.

She adds: ‘Back in the day, you had to go to auction rooms, private sales or needed to know the right people on the inside, in the hope of finding vintage and unique collectors’ items.

The uptick in both the selling and buying of second-hand is largely underpinned by a shift in mindset and behaviour around sustainable fashion.

‘But today the internet has changed things and the desire to shop sustainably has grown.

‘Using online platforms for second-hand clothing, you gain easy and safe access to plenty of unique and retro items.

‘The uptick in both the selling and buying of second-hand is largely underpinned by a shift in mindset and behaviour around sustainable fashion.

‘Consumers are proactively pushing for more ethical consumption around the world. The pandemic has shifted priorities and accelerated the already growing movement toward more conscious consumerism.

‘Our internal member research suggests that responsible action is important for Vinted users; just over half agree that it’s a ‘shame to throw away items that someone else might want.”

Coming home: These shirts have proven popular with fans not wanting to spend vast sums on the real, new version costing £70-plus

A number of companies have popped up with these retro kits, that look broadly like the real thing and typically cost less than £30.

Recently, I was wandering around DW Sports – part of the Mike Ashley Frasers Group empire – and noticed a company called Score Draw had a number of retro England shirts available for less than half the price of the latest version from Nike, which is £69.99.

It’s no secret that the cost of buying a replica shirt has ballooned over the last decade, and many fans simply refuse to be taken advantage of.

According to its website, Score Draw football shirts are officially licensed and endorsed by over 40 football clubs and national associations accommodating over 600 styles from over five decades.

I have jumped on this retro craze this week. I’m the proud owner of the home and away Southend shirts, as I mentioned earlier, and also have a Schalke shirt I bought for a few quid from M&M Direct earlier in the year, for running in.

However, the shirt I have always wanted is the late 1990s Fiorentina one, with ‘9 Batistuta’ on the back and sponsored by Nintendo, the company responsible for much joy in my youth.

The Viola have always been my favourite Italian team from the Channel 4 Football Italia days. This was also partially down to the fact that Southend played there in the mid-90s in the fantastic, and now defunct, Anglo Italian Cup, and Batistuta scored.

I eventually wore that VHS out of highlights out.

I was meant to visit Florence last year, and was going to go to a match at the Artemio Franchi Stadium, but that was called off because of the pandemic.

I have tickets for a last 16 Euro 2020 match today at Wembley, Austria vs Italy.

I found what I was looking for after a hunt on eBay. A retro replica of that Fiorentina kit, for the bargain price of £19, complete with Batistuta on the back.

It’s not the real thing, but I love it. Meanwhile, my friend who is coming with me will ditch his 80s red England retro kit for a Torino one he found online, as that’s his favourite Italian team – we’re going to be quite the clash in purple and maroon.

Now I just had to decide whether I want the custard splat kit back in my life: is it a little too garish on the mean streets of Essex and would I get £35 worth of wear out of it?

Last June, after watching the superb basketball documentary The Last Dance on Netflix, I mentioned that many see English football shirts as tacky to wear.

While I still believe that to be the case somewhat, these retro kits have a different vibe about them.

Even Arsenal in 2019/20 had an away shirt that was a nod to its iconic ‘bruised banana’ design from the early 1990s, with more teams going down that route.

I also said that US sports apparel has a badge of cool about it in comparison. I still think this is the case too, but it’s good to see a bit of innovation in the football shirt market.

I’m also going to add here that I recently finished reading Eleven Rings by Phil Jackson, the former coach of Chicago Bulls and the LA Lakers.

It is one of the best I’ve read tackling not only the sport itself, but what it takes to win, management skills and spirituality.