Are some people hard-wired to handle break-ups better?

They say it takes six months to get over a break-up.

But some people seem to ‘rebound’ within weeks, days or even hours.

Does that mean they’re more resilient than the rest of us?

In a nutshell, resilience is not a personality trait we are born with or not, she says, and no one feels like they ‘bounce back’, even if it seems like it from the outside. Working through grief is an internal struggle for everyone.

However, research has shown that some people have a natural inclination to coach themselves through adversity.

Some people fear that they are not resilient as others. Dr Meg Jay explains how to push through that during a break-up (file image)

Specifically, one 2000 study on prisoners of war in East Germany found that some developed PTSD afterwards and others didn’t.

While there are many theories about what triggers PTSD, this research by Anke Ehlers of Oxford University found that all of those who did not develop PTSD said the same thing: they were mentally coaching themselves through it.

The study did not, by any means, suggest that the POWs ‘bounce back’, but it was hailed as a major development in psychological research, suggesting some of us may naturally have a perceived positive mindset.

Dr Jay, who cites this research in her soon-to-be-released book Supernormal: The Untold Story Of Adversity And Resilience, says we do not know why some prisoners of war can steel themselves through the torture – or, at the other extreme, some people can motivate themselves to get out of bed an hour earlier for a run in 50-degree cold.

However, she says there are some concrete things we can all do to make ourselves feel more resilient and power through sadness.

1. DO NOT THINK OF YOURSELF AS ‘NOT RESILIENT’ – EVEN IF YOU FEEL HELPLESS

‘I take issue with the “bounce back” description,’ Dr Jay says.

‘That’s the way we describe it but that’s not how it feels for anyone. We say someone rebounded with the next person. But most people feel more like they “battle back”, it’s more like a struggle and they have to fight back against the bad feelings that come at them.

‘It’s very common for people to think “well I don’t bounce back, there’s something wrong with me.” And they don’t feel like it was a bounce back because it was hard and it took time.

‘You’re not doing it wrong.

‘Resilience needs time. It could be months or years, but you get through it and you feel better after it. It doesn’t mean you’re not resilient because you weren’t over it the next day.

‘Maybe some people do feel like resilience is very easy, and that may be because they have had to be resilient other times in their life. But for most people, doing hard things and handling bad situations well is not natural and emotionless.’

2. MAKE A LIST OF HOW YOU MADE IT THROUGH TOUGH TIMES IN THE PAST – AND REALIZE YOU ARE NOT ‘DOOMED’ IF YOU’VE BEEN THROUGH MULTIPLE SPLITS

Dr Jay, who has been dubbed an expert in 20-somethings, sees countless patients who believe their previous relationship woes are indicators of their ‘luck in love’.

But she says you have to recognize that ‘your past cuts both ways’.

‘For people who go through a lot of break-ups, you might think, “why does this keep happening to me? What’s wrong with me?” Or, if you grow up with an unstable family, you might think you will never have happiness.

‘That doesn’t have to be the case, and it’s important to look at how your past is casting a shadow over your present.

‘Oftentimes when people go through hard times – and I think break-ups are a perfect example of this – people don’t remember or recognize how they got through it before. We don’t give ourselves credit for those times.

‘How did you get through it when you lost your job? Or after your other break-ups? Or when your parents got divorced?

‘A lot of people are more resilient than they realize, but they may only remember the bad things that happened, not what they did afterwards.

‘Stop and make a list of all those moments.’

3. FORCE YOURSELF TO STICK TO PLANS

‘Going for a run in the morning might seem like a small thing, but making an effort to keep these things in your life is important.

‘It’s called the “steeling effect”. If I can do this little thing, I can do the next little thing, and you can see that you’re able to keep going. Anything you do to cope helps to make you more equipped for the next thing you face.

‘During a run, for example, it is tough, you don’t enjoy it, and you want it to be over – you think it’s going to last forever. But afterwards you think, “ok, it didn’t last as long as I thought it would, I felt better when it was over, and I was able to do it”.

‘It’s the same with a break-up. Once you go through all of the sadness and pain – which you will have to go through – then you realize that the break-up was a good thing; that you’re happy you’re not in that relationship any more.’ 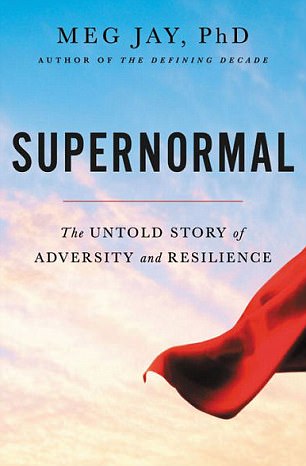 Dr Jay, who has been dubbed an expert in 20-somethings, will release Supernormal, her second non-fiction book, on November 14

4. JOIN A CLASS OR A NON-EMOTIONAL ACTIVITY

‘Pick a challenge or join a class. Perhaps it’s a run in the morning or another activity – a less emotionally laden experience to show yourself that you’re strong.

‘It will take your mind off feeling defeated and let you focus on other things.’

5. FIND PEOPLE TO LEAN ON

‘Strong people who got through tough times successfully always have at least one person that they say helped them through it.

‘Being strong means letting others help you be strong. Resilience is fighting back against what’s gone wrong – it doesn’t mean you have to do that alone.

‘We’ve all been through our series of break-ups so who doesn’t understand? We all know someone who knows what we’re going through.’