Are these the hitmen sent to kill Putin critic Babchenko in Ukraine?

The Russian journalist who helped the Ukrainian secret service fake his own death today told the British media to ‘go f*** themselves’ over criticism of the stunt.

Putin critic Arkady Babchenko, 41, shocked the world yesterday when he turned up at a press conference about his own ‘murder’, revealing that it had been part of a plan to catch two hitmen allegedly hired by Russian secret service to kill him.

Ukraine today said they have charged one of the two ‘hitmen’ they caught in the wake of the outlandish scheme, which was likened to a Sherlock Holmes plot.

The man, identified only as Citizen G, was charged with plotting terrorism and faces up to 12 years in jail if convicted, according to Ukrainian news outlets, citing a law enforcement source. Ukrainian secret service released a video purporting to show his arrest in Kiev yesterday.

They are also investigating if the second suspect may be a Chechen assassin.

Babchenko launched his attack on the British media on his Facebook page on Thursday in response to criticism of the deception.

Not dead yet: Russian journalist Arkady Babchenko, who had been reported shot and killed in the Ukrainian capital Tuesday, turns up at news conference on Wednesday – alive and well

He said: ‘The British media is questioning whether there is really more harm than good that came from what I did? Dear British press, would you please go and f*** yourselves?

‘If you want to do something useful however, you can give me a British passport and British protection. Then you will have the right to teach me how I should save myself and my family. F***ing smart-a***s!’

Many British and international journalists had taken to social media to criticise the stunt, saying it would to lead to accusations of ‘fake news’ and several Western commentators and reporters said it would be difficult to trust official statements from Ukraine again.

Lindsey Hilsum, the international editor for Channel 4 News, tweeted: ‘So now every time a journalist is murdered, those responsible will unleash their bots and propagandists to say it’s fake news. Thanks, Ukrainian security services. That’s really helpful to all who care about journalists’ safety.’

Leonid Ragozin, a former BBC and Russian Newsweek journalist, tweeted: ‘Babchenko’s death turns out to be fake news of the century. A mindless and tragic mistreatment of public empathy that discredits so many things at once – Ukraine, Russian liberals, journalists. Only Kremlin wins.’ 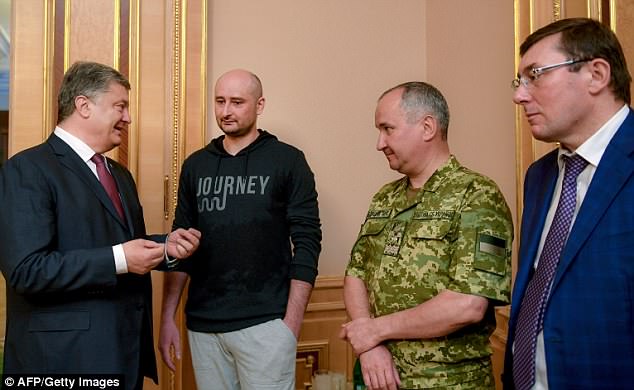 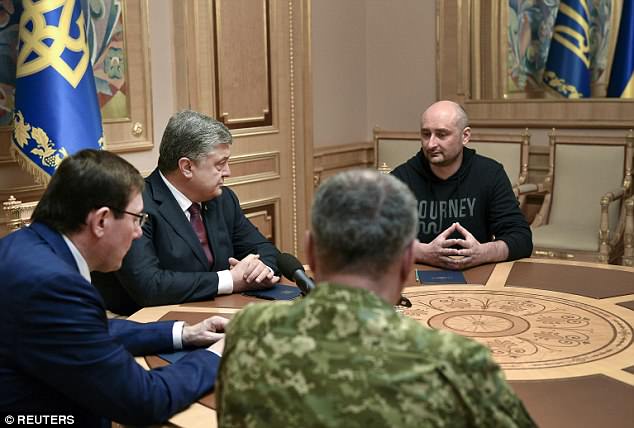 Babchenko met the President on Wednesday afternoon, following the revelation that his death had been faked by Ukrainian authorities

Media watchdog slams the operation as a ‘pathetic stunt’

Reporters Without Borders condemned Wednesday the staging of a murder of an anti-Kremlin journalist in Ukraine as a ‘pathetic stunt’.

Christophe Deloire, the head of the Paris-based media watchdog, told AFP that while he was relieved that Arkady Babchenko was alive, ‘it is pathetic and regrettable that the Ukrainian police have played with the truth, whatever their motive… for the stunt’.

Deloire insisted the fake set-up ‘would not help the cause of press freedom. All it takes is one case like this to cast doubt on all the other political assassinations,’ he said, referring to the killings of a number of the Kremlin’s critics in Ukraine in recent years.

‘It is the state lying, even if it was brief,’ he added.

The Russian media’s response to the story of Babchenko’s ‘death’ and resurrection has been one of disdain and glee, saying it proves that media in Western nations have an anti-Putin agenda.

Putin-funded news channel RT mocked Western outlets for reporting on Babchenko’s ‘death’ as fact when the information had come from a Russian adversary nation, saying the likes of CNN and the BBC ‘ should do a lot of soul-searching.’

Others attacked Babchenko for going along with the Ukrainian secret service’s stunt, including one of his former colleagues who said that while he was glad that Babchenko was still alive, he had ‘undermined the credibility of journalists’.

Babchenko’s outburst is the latest twist in the quagmire of misinformation and changing details surrounding his faked murder.

After launching their plan of Babchenko’s fake death, which included images of his body in a pool of blood, the Ukrainians also released an identikit of his ‘killer’ which shows a bearded man in a cap.

Today, Ukrainian media claims to have spotted a likeness between the identikit drawing and a notorious ‘Chechen hitman’ named Valid Lurakhmanov. 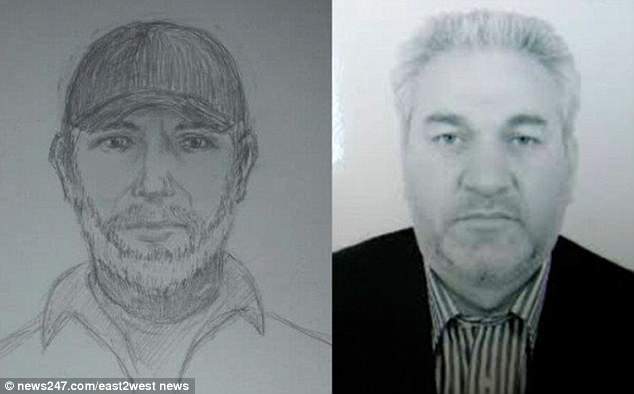 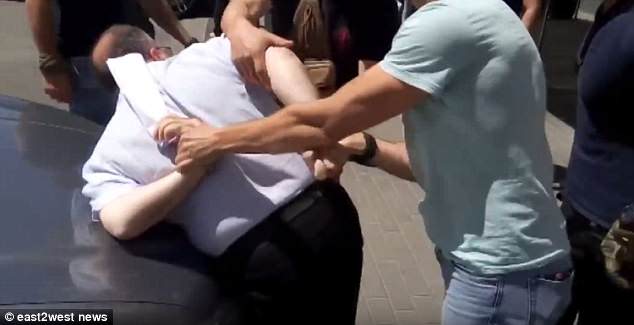 Taken in: A video released yesterday allegedly show the arrest of the Ukrainian man hired by the Russians to find a hitman to carry out the killing 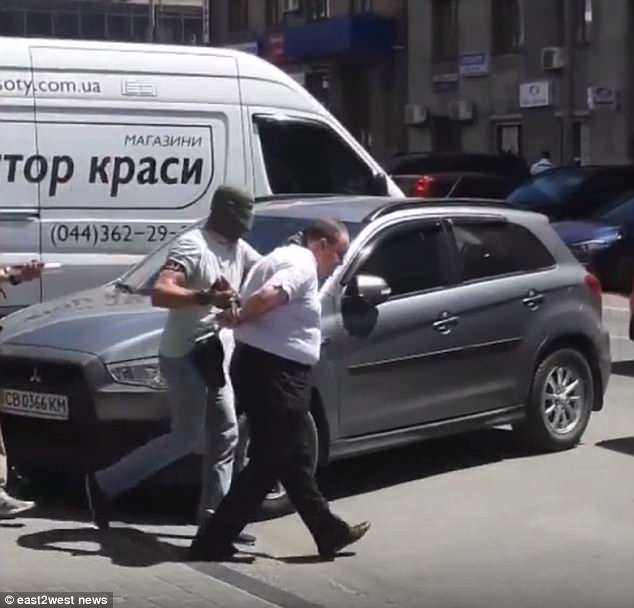 It was reported yesterday that this video showed the arrest of a Russian security service operative, but Kiev officials have today said this is in fact one of the two Ukrainians

They say that that Lurakhmanov is known to be in the country and that he is using false Ukrainian documents under the name Alexander Smirnov.

Police Chief Andrii Kryschenko did neither confirm nor deny that the man they have in custody is Lurakhmanov, and told reporters: ‘We will verify this information.’

Officials did not comment any further on the charges of the man accused of hiring the would-be assassin, Citizen G, who faces up to 12 years in jail if convicted of terrorism charges.

Yesterday Ukrainian secret service released a video purporting to show the arrest of Citizen G in Kiev. At the time, they said it showed the arrest of a Russian security service operative, but Kiev officials have today clarified that the man seen in the clip is Citizen G. 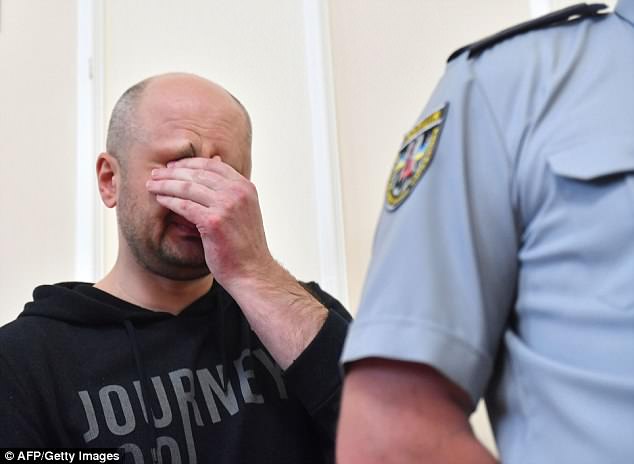 Emotional: Babchenko breaks down in tears during his press conference after admitting that his murder had been staged 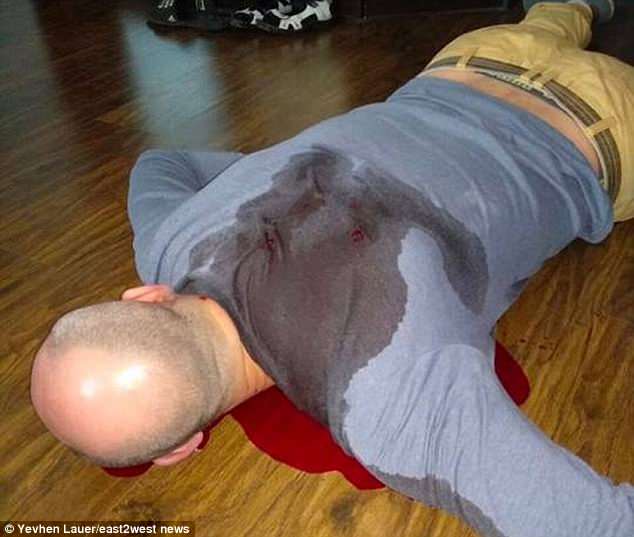 Fake news: This image began circulating after Babchenko’s ‘death’ was made public

The incredible tale began on Tuesday, when 41-year-old Kremlin-critical journalist Arkady Babchenko was reported dead, having supposedly been shot in the back several times in his apartment building in Kiev, Ukraine.

Images circulated of Babchenko, a father-of-six, lying on his front, with holes in the back of his shirt, and a pool of blood underneath him.

Tributes were paid by colleagues and friends online, and his wife was reported to be inconsolable to the point where police were unable to speak to her.

However, on Wednesday, he emerged alive at a press conference as the Ukrainian secret service admitted to staging his death to investigate a Russian plot to kill him.

Babchenko has since vowed: ‘They will never get me,’ saying he aims to ‘die at 96 having danced on Putin’s grave’.

Babchenko’s public apology to his wife Olga during the press conference was interpreted as her having been led to believe that he was really dead.

Large family: Babchenko and his wife have six daughters, some of whom are adopted 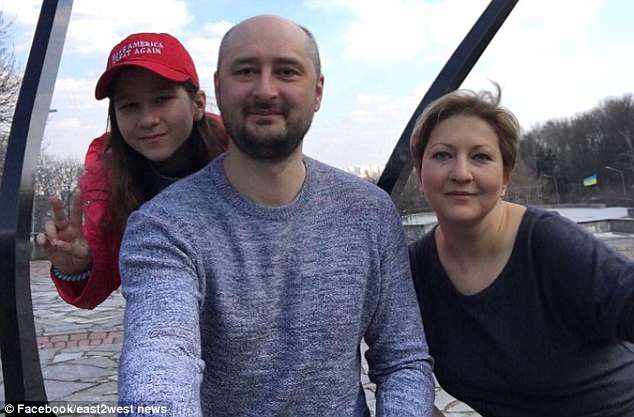 In on it: It was reported yesterday that Babchenko’s wife Olga, right, had not known about the plot, but friends say today that she did

However this has today been rubbished by Babchenko’s friend Yury Matsarsky, who has insisted the wife was fully aware of everything.

‘Babchenko’s wife knew that his death was staged,’ he said.

‘In other words, Babchenko’s wife was sitting next to the fake blood pool on the floor, knew everything and controlled herself aiming to tell us nothing.

‘What’s more, she tried to help us cope with it too.

‘As a result, she did not confess that she knew it and simply could not say it even to close friends in order not to ruin the special operation.’

A number of Kremlin critics have been killed in Ukraine in recent years, with one gunned down on a Kiev street in broad daylight and another whose car exploded.

Babchenko fought in Russia’s two Chechen campaigns in the 1990s and early 2000s before becoming a war correspondent and author.

He has contributed to a number of media outlets including top opposition newspaper Novaya Gazeta and is an avid blogger, accusing Russian authorities of killing Kremlin critics and unleashing wars in Ukraine, Syria and elsewhere.

Babchenko left Russia in February 2017 after receiving threats, living first in the Czech Republic, then in Israel, before moving to Kiev.

In recent years his increasingly bombastic posts pushed the boundaries of good taste and some of his colleagues and followers stopped reading him on Facebook.

The Russian media response to the faked murder of Babchenko has been critical of both Western media and the Russian reporter himself.

Kremlin-funded news channel RT mocked Western outlets for reporting on Babchenko’s ‘death’ as fact when the information had come from a Russian adversary nation, saying the likes of CNN and the BBC ‘ should do a lot of soul-searching.’

Kevin Rothrock, an editor on Russian news site Meduza, tweeted: ‘By lying to the media, Babchenko and the Ukrainian authorities have made fools of everyone who reported yesterday’s ‘murder.’

‘I apologize to all my followers for circulating what turns out to be total baloney. The lesson here is to distrust reports from Ukraine. ‘

Others attacked Babchenko personally for going along with the Ukrainian secret service’s stunt.

By lying to the media, Babchenko and the Ukrainian authorities have made fools of everyone who reported yesterday’s “murder.” I apologize to all my followers for circulating what turns out to be total baloney. The lesson here is to distrust reports from Ukraine.

Russian investigative journalist Andrei Soldatov, a former colleague of Babchenko questioned the value of the operation.

‘To me, it’s crossing a line big time. Babchenko is a journalist not a policeman, for Christ sake, and part of our job is trust, whatever Trump & Putin say about fake news.

‘I’m glad he is alive, but he undermined even further the credibility of journalists and the media,’ he added.

‘It’s an incredible story of a resurrection,’ joked Russian journalist Pavel Kanygin who like several of his Russian colleagues had rushed to Kiev to cover the story.

‘It’s a miracle, but a miracle that turned out to be a staged drama. Obviously some think this will damage confidence in the special services, the security services and the media,’ said Kanygin.

‘Our readers or viewers are of course going to ask questions when we cry wolf’.

The head of RT, Margarita Simonyan, posted a screen grab of Babchenko at his press conference on Twitter saying : ‘My cat has exactly the same face [as Babchenko] when it makes a mess under my kitchen table.’