Are travel stocks about to take off or have you missed the boat?

With international travel cleared for take-off next week, a return to normal appears closer than ever.

But the Government’s ‘green list’, approving travel to just 12 countries, has failed to move the markets.

While some travel stocks – such as cruise operator Carnival – opened higher on Monday, others slumped before falling again on Tuesday (as worldwide markets tumbled 2 per cent on inflationary fears). This suggests markets had already priced in the news.

Yet shares in airlines and cruise companies are still some way below their pre-Covid levels, so many will be hoping that better returns are to come.

Is it really too late to profit from a Covid comeback, or are shares still infected by the pandemic facing a long and hard road to recovery?

For any investors holding travel stocks, the past 18 months have been a tale of two extremes.

As you might expect, airlines were among the worst hit by the Covid crash, with BA owner IAG losing 60 per cent of its value.

Over the past year, though, fortunes have improved, with easyJet and Carnival Cruise Line among the FTSE’s biggest risers.

Even so, it’s important for investors to look at how each individual company is likely to fare in a post-Covid world.

IAG, for example, still remains significantly below its January 2020 peak, and has lagged behind its budget competitors.

That is because historically BA has relied on long-haul business travel, which is likely to remain squeezed by video-conferencing for some time. 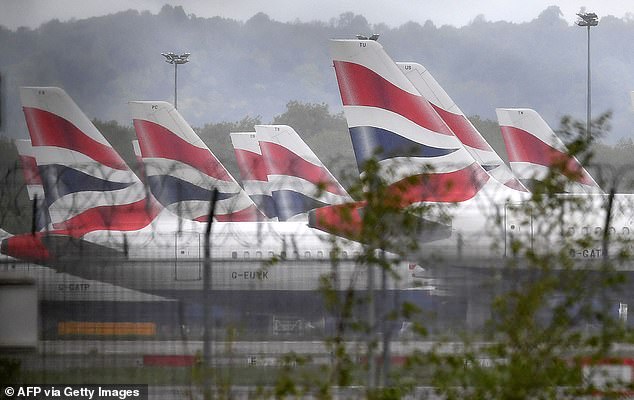 Grounded: Airlines were among the worst hit by the Covid crash, with BA owner IAG losing 60 per cent of its value

Its passenger numbers are just 20 per cent of pre-pandemic levels, and these are predicted to rise to only 25 per cent this summer.

It’s a different story for largely European-focused airlines, which stand to cash in on pent-up demand for holiday travel.

Ryanair, for example, has risen to its best price since November 2017, while newcomer Wizz Air is pushing towards record highs.

Travel firms are not the only ones hoping for an end to lockdown. Hospitality, property and retail shares have all endured a turbulent ride.

Sentiment remains positive, with this coming Monday tipped as the start of a summer spending boom as further restrictions are lifted.

It is a reversal of the picture last spring, when markets were expecting the worst.

Now, they are anticipating a recovery – yet remain sensitive to bad news. Updates about new Covid variants – and the possibility of a vaccine-resistant strain – are usually enough to trigger a wobble.

Travel stocks remain particularly sensitive to this effect, given the additional risk to their business.

If rising infections in Europe were to lead to a dramatic extension of the ‘red list’, shares would almost certainly plunge – probably by more than 5 per cent.

Whether or not you choose to back airline stocks, you won’t be alone in betting on a British bounce back.

The end of Brexit uncertainty, and the encouraging vaccine data, has seen the FTSE 250 – regarded as a bellwether of the wider UK economy – race to record highs. 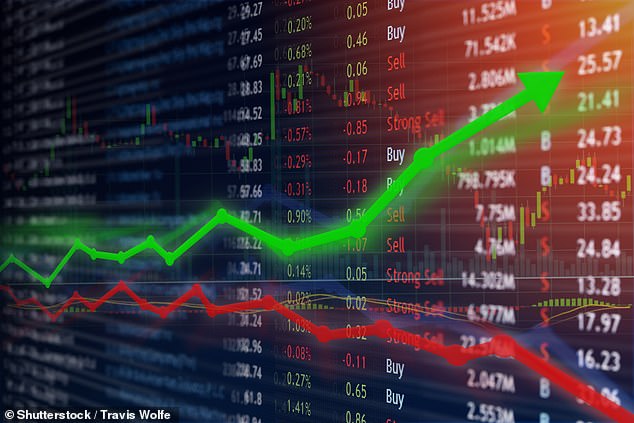 The end of Brexit uncertainty, and the encouraging vaccine data, has seen the FTSE 250 – regarded as a bellwether of the wider UK economy – race to record highs

Even the slower FTSE 100, still dominated by out-of-fashion oil multinationals and big banks, is up 6 per cent since the start of the year.

For some fund managers, UK shares are beginning to look a safer bet than the frantic U.S. markets, which remain at the mercy of volatile tech stocks.

DIY investors looking to follow them in betting on a British recovery will be spoilt for choice.

IAG and easyJet are both big holdings for Artemis UK Select, a FTSE-focused fund looking for long-term growth opportunities.

A £10,000 investment made five years ago would now be worth more than £18,000 -thanks largely to an impressive performance in the past year.

Temple Bar Investment Trust is well known for its strategy of targeting UK shares, which it believes are highly undervalued.

It has a large stake in Royal Mail -one of the highest-performing FTSE shares of last year – and Marks & Spencer.

The trust suffered a disastrous 45 per cent fall at the beginning of 2020, which has hampered its long-term performance: £10,000 invested five years ago would be worth just £11,000.

After a change in management in September, the trust has shown a spirited fightback, with a 20 per cent rise in its share price in 2021 alone.

Of course, any investment in UK funds should be part of a balanced portfolio. In particular, investors should be wary of ‘home bias’ – a common effect where investors put all of their money into domestic funds.

So, in addition, be sure to back global funds, such as Baillie Gifford’s popular Global Alpha Growth, as well as those focused on other major markets (such as the U.S., Japan and Europe).

This will ensure your money is protected against any FTSE turbulence, or any sudden change in the value of the pound.