Are you pampering your pooch too much? Half of dog owners celebrate their pet’s birthday

Large numbers of Australians treat their dogs as if they are human, celebrate their birthdays, cook them meals and let them sleep in their beds, a survey has found.

Pooch pampering is fast becoming the norm in Australia where just under 3.6 million households own a dog.

Nadene Mangleson-Steel (pictured right) with her two Jack Russell crossbreeds Freya and Chipper. A paid dog-walker takes the pampered pets for a swim every day Nadene is at work, she gives them barbecued chicken treats every morning and they sleep in the bed

The results of the February survey, released on Monday, showed one third of all respondents said they cook their dog its own meals while another 32 percent regularly buy regular gifts for their pet.

Around 70 percent of dog owners polled consider their pet part of the family and 27 percent of dogs sleep in their owners’ beds at night.

The survey also looked at spending patterns and found that almost half of all owners spend more than $1800 per year on their dog. 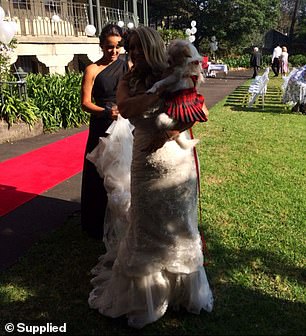 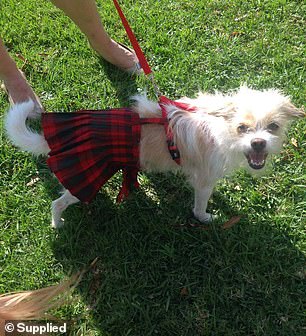 The Elanco study also looked at spending patterns and surprisingly, Gen Z dog owners are most likely to be pampering their dogs.

A third of young owners (32%) say they spend more than $3,000 per year on their dog, more than they spend on phone and internet access or public transport.

The research also found almost half (45%) of all owners are spending more than $1,800 a year on their dog.

While most pet owners are responsible, 31 percent of dog owners admitted they do not pick up after their dog when it defecates in public. 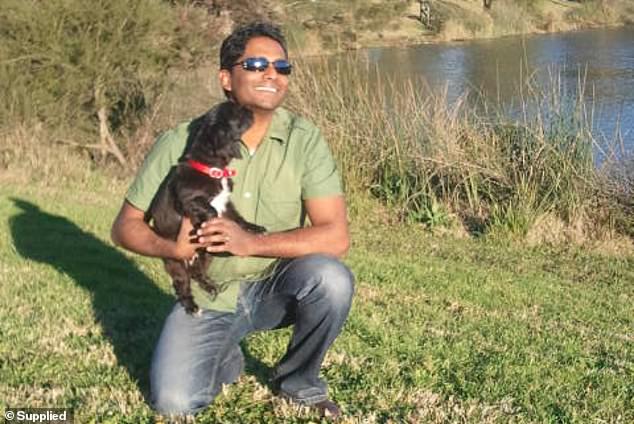 Proud dog ‘parents’ Nadene Mangleson-Steel and her husband David are meticulous about hygiene for their dogs.

The couple own two rescued Jack Russell crossbreeds and let them sleep on the king-sized bed along with one of their three cats.

Every day before work the pet parents give their dogs a barbecued chicken treat, hiding it in a stuffer mat which is a puzzle made of fabric fillers that challenges the dogs to sniff out and find the treats, keeping them occupied for about an hour.

– Parasitic worms are spread through eggs in feces, and also saliva

– Do not let dogs lick your face

– Wash your hands after patting a dog

–  When walking your dog, always pick up its poo using an inverted plastic bag to protect your hand, tie it up and throw it in the bin

– Make sure your dog is protected from the ‘Big Five’ parasites: ticks, fleas, heartworm, intestinal worms and tapeworm

While they are at work, a paid dog-walker takes the dogs swimming.

‘They have the life,’ Nadene said.

‘Swimming at the beach and river, and walks.’

On holidays they go to pet-friendly destinations and take their fur babies with them.

When the couple were married they had a special kilt made for chihuahua-Jack Russell cross Freya who participated in the ceremony as the ‘flower girl’.

Elanco Animal Health technical veterinary manager Claude Stanislaus said while people love their dogs, they need to be meticulous about dog hygiene to prevent them spreading parasites to people.

‘Unlike us, dogs do not take daily showers, they stick their noses in each other’s bottoms, they sometimes eat animal poo if they find it, and we then hug them and invite them into our beds,’ he said in a press release.

Nadene said she was vigilant about treating her fur babies for fleas and pets every month to keep them free of parasites as she is aware of the risks of intestinal worms that can spread from dogs to humans.

The most serious parasite is the rare but potentially deadly hydatid tapeworm that can cause cysts on the liver and lungs, requiring surgery.

Dogs can pick up the infection by eating uncooked offal, and pass it on to people. 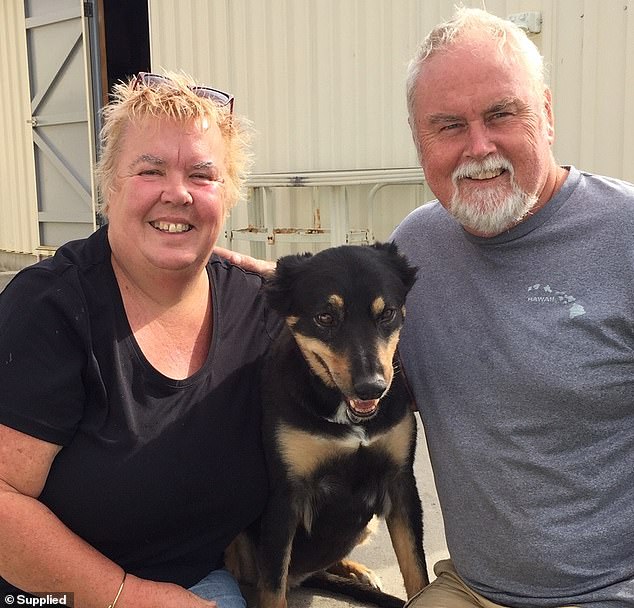 Mary-Anne O’Neill (left) with her husband Craig Melchior and dog Jedda. Mary-Anne suffered a hydatid tapeworm infection at age 17 caught when she traveled around neighbouring farms as a child. She had to have surgery which collapsed her left lung to remove the cyst

About 20 to 30 people in Australia present with infections each year, he said, although many of those cases are from travelers or migrants who pick up the parasite overseas.

Dr Jenkins said transmission can be prevented by cooking the offal or freezing it for two weeks.

Mary-Anne O’Neill, 64, of Tumut, NSW said she had picked up a hydatid infection as a child, growing up on a farm in nearby Talbingo.

As a child she travelled with her father to neighboring farms where she would pat the dogs, and may have picked up the parasite there.

Doctors caught the shadow on her lungs when she had an X-ray following severe bronchitis when she was 17 years old.

Surgeons removed the dormant cyst in a major operation during which they had to collapse her left lung.

‘They opened my chest from under my left breast to my left shoulder blade,’  she told Daily Mail Australia.

‘It left a massive bright pink scar. When I went swimming I’d tell people I was attacked by a shark.’

The brush with death did not put Ms O’Neill off owning dogs and her current pet Jedda has just been spoiled with a three-year trip around Australia in a campervan.

‘She thinks it’s all about her,’ Ms O’Neill said.