Are you ready for the robot revolution? We test some of them out

Robots can now handle an increasing number of day-to-day chores. The Mail on Sunday tests some of them out and discovers they can actually save you time as well as money.

PLUG IN A HOUSE CLEANER

Among the most tiresome chores is cleaning the home. Even those who can afford a human cleaner might be surprised how costs soon add up.

The average cleaner earns £10 an hour so if they visit four hours a week they will cost £2,080 a year – money that you could invest in a robot. In the last century cleaning was transformed by user-friendly inventions such as the washing machine, dishwasher and vacuum cleaner. But this century could witness the march of the robot cleaner, dusting and ironing on command.

Robo-mop: Tasks such as ironing and dusting will be done by cyber-cleaners

The Dyson I trialled was the size of a large tin of assorted sweets but had a strong weighty feel and a futuristic look – with a Dalek-like eye on top. Sitting on its docking station the biggest stumbling block to it kicking into life was me – I could not remember the home wi-fi password. When I did, I downloaded an app on my phone that controls when the vacuum will hoover and where it goes.

I move out of the way a few loose power cords and stray items lying on the floor, including rug edges and shoes with laces that the vacuum likes to chew up.

It takes half an hour to clean the kitchen floor, whirling away at a slow but steady pace. Although not as powerful as a hand-pushed vacuum it still sucks up well.

It then obediently returns to its docking station and turns itself off. It is quite noisy – even an optional ‘quiet’ mode is not enough to allow you to concentrate while it goes about its work.

But it has a strange Svengali effect. Both my children offer to use the robo-vacuum to clean their rooms – there is a first-time for everything – and even though the vacuum does all the legwork they still tidy stuff strewn across their floors before it could be plugged in and used. This robot revolution is most welcome in our home.

Other robots are currently being developed to iron a dozen pieces of clothing at a time, tackling shirts, trousers and even underwear.

Inventor Rohan Kamdar, from Royston in Hertfordshire, has created ironing robot Effie which he hopes to market for £700.

He says: ‘The start of Monday morning blues often begins on a Sunday evening when the ironing board gets dragged out. I aim to banish that sinking feeling with Effie which I am hoping will be available late next year.’

For those who hate vacuuming or ironing and would rather spend their spare time doing something else these robots are a temptation.

VERDICT: Pricey but cheaper than a cleaner

GET A ROBOT TO MOW THE LAWN

There are two types of people in the world: those who love to mow the lawn and those who would rather do anything else.

If you fall into the latter camp then investing in a robo-mower could be a handy solution. Once seen as a space-age gimmick – prototypes did indeed use solar panel technology taken from the Nasa Space Shuttle programme – these high-tech gadgets have finally come of age. There is a growing range from which to choose as a replacement to a traditional mower. 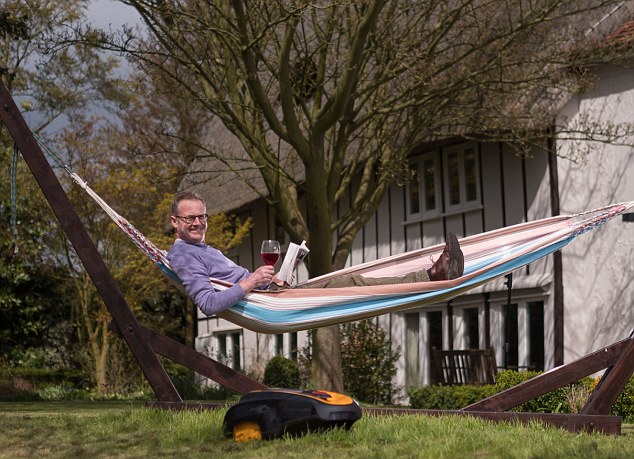 A cut above: Toby Walne takes a breather while ‘Rob’ trims his lawn

I try out ‘Rob’, a £580 model lent by American lawn mower manufacturer McCulloch. First I must spend a couple of hours laying green wire around the perimeter of my lawn. This acts as a sensor to ensure Rob does not run amok in the flowerbeds. Having charged up Rob on the mains electricity supply, I press a button for him to get mowing. A message comes up on the screen: ‘No loop signal’.

A long time later – having failed to get Rob to work despite checking all the connections and a lot of industrial language aimed at him – the supplier tells me to reset the system.

Hey presto. The mower sparks into life and trundles off its docking station. More tortoise than hare, it appears to randomly dawdle around the garden, nibbling grass as it goes. It negotiates trees by bumping into them and learning to go round.

Begrudgingly, I have to admit it does a neat job – even if it fails to pick up cuttings. It also needed a petrol-driven mower to get the lawn to a maximum height of ten centimetres before unleashing Rob.

Rob can be timed to go out and mow any time of day or night – and return to a docking station when a recharge is required. Many see it as the future – not me. I prefer the satisfaction of doing my own mowing and savouring the smell of freshly cut grass.

Brian Radam is author of the Haynes Lawnmower Manual. He says: ‘Strictly speaking these robo-mowers are rotary grass cutters. They keep the lawn neat and tidy by slashing and ripping at the grass. But if you are after a clean formal finish with stripes, only a lawnmower with a cylinder, blades and roller will do the job.’

He adds: ‘If the idea of pushing a mower around a garden seems like a chore then a robo-mower can be a great labour saving device.’

Britain is one of the most spied upon nations on earth, with a surveillance camera for every 11 people. The majority of closed circuit television cameras are inside shops or on city streets, capturing what is going on when we walk or drive. For murder cases Scotland Yard now uses such video footage in a majority of trials, while speed cameras rake in at least £100million a year in fines.

There has also been an explosion in home surveillance, linking spy cameras to smartphones. Among the most popular are the £250 Netatmo Presence, £179 Nest Cam Outdoor, £160 Logitech Circle and the £170 Netgear Arlo Q. 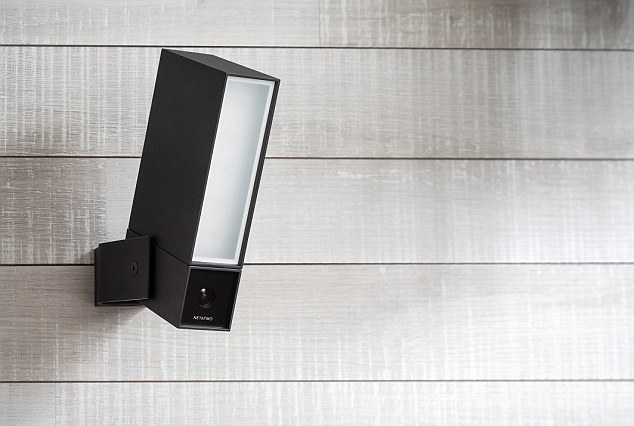 Among the latest high-tech cyber spies is the £299 Nest Cam IQ that you plug into the mains and it then communicates remotely with your mobile phone through a Nest app. It scans faces that come into view on the camera and if it does not recognise one, it sends a text alert with photo to your phone. Such cameras are not only useful for capturing criminals attempting to burgle your home – they can also keep an eye on your pets, even allowing you to talk to them through a tiny speaker on the camera.

Setting up this camera with my mobile was easy but it was unnerving to spy on what was going on in the kitchen and hear what people were saying – and to surprise them by talking back.

Although a great security device when the family is out of the house, it felt wrong to be eavesdropping on conversations without others being aware.

James Kelly is chief executive of trade body the British Security Industry Association. He says: ‘Cameras linked to smartphones can certainly add an extra layer of security to the home. But you get what you pay for. Those wanting top quality security should consult an expert to help decide on the best surveillance measures.’

The insurance industry is wary of accepting the use of home spy cameras as a reason to lower home insurance premiums but a full burglar alarm system can cut the cost by as much as 20 per cent.

USE A VIRTUAL BUTLER SERVICE

The idea of having a virtual butler close at hand who can sort out your housekeeping duties seems appealing.

But the reality is that you get a small plastic speaker that sits on the kitchen table rather than a real-life Jeeves in formal livery.

They include Alexa, Google Assistant and Siri. They are voice-responsive apps linked to other gadgets – including smartphones and speakers – such as Echo, Google Home and HomePod.

They include software that is activated by voice and a ‘virtual’ personal assistant who can talk back to you with information – everything from the character in a favourite film to the latest football scores.

They can also turn on radios, become alarm clocks or keep your diary up to date.

Among their most common uses is playing music, helping you draw up a shopping list and giving a weather forecast. 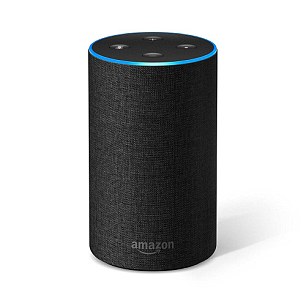 I have Siri installed on my smartphone and TV set. The only time I find it useful is when I am looking for films to watch. It is quicker to call out a movie’s name rather than be all fingers-and-thumbs with an online keyboard. But it leaves me feeling ashamed at being so lazy.

Stuart Miles is founder of technology review website Pocket-lint. He says: ‘These devices are now mainstream. Linked to an increasing number of smart gadgets in the home they do far more than just find favourite music or answer questions using the internet. They help with TV viewing, cut energy bills by controlling lights and heating and can even help you try out new recipes.’

Alexa is made by Amazon and is a voice-controlled system that can be downloaded as an app for free on your smartphone.

But to take commands you need a cylindrical £90 Echo smart microphone and speaker system. There are smaller versions – a £50 Dot – that Alexa can also connect to.

Google Assistant is another virtual personal assistant that you can download as an app. It can be paired with the £129 voice activated speaker Google Home. It can also stream music, provide weather, traffic and sports updates.

With the right gadget connections it can also stream videos to your TV and even adjust the thermostat in your home.

The Apple app Siri can be wired up to a £319 HomePod smart speaker system and works much like other virtual personal assistants – but is more about pumping out music from its sound system.

VERDICT: Not just a gimmick – but no godsend

It cuts out the expense of having to see a real financial adviser who might cost anything from £150 an hour. 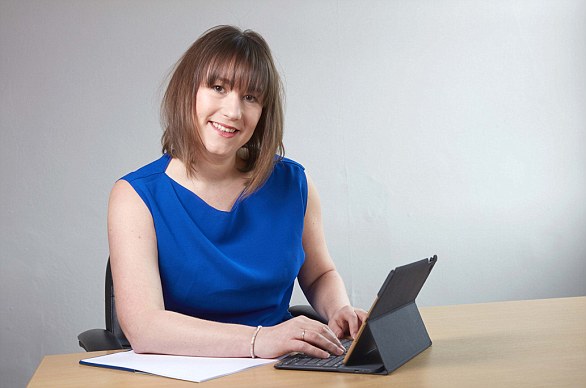 With robo-advice, you are presented with a list of questions you answer online – which can be done on a laptop or smartphone. These target your financial ambitions, attitude to risk, tax situation and savings time frame. Once all the information is provided, the algorithm spits out a plan – a range of investment options.

By cutting out human contact there may be no or little cost to the setting-up of your portfolio – while annual charges are usually no more than one per cent.

I visit the website of robo investment manager Nutmeg and see what kind of nest egg its robots might help me nurture.

I am not interested in sitting on the fence and opt to be an ‘adventurous’ investor rather than ‘cautious’ or ‘steady’. I might not have been quite so gung-ho sitting down with a real adviser looking me in the eye but nobody is keeping a watchful eye on me. There is an initial charge of 0.45 per cent followed by 0.25 per cent per annum – so charges are low even if I have no idea where the money will be invested.

Assuming I invest £500 initially and £200 a month thereafter, I am told the projected pot after a decade could be £31,425. A tidy £7,125 more than if I kept it all under the bedroom mattress. I am buoyed but there is a ‘Your investment may lose value’ warning at the bottom of the page to bring me back down to investment earth.

Yet this is a user-friendly robot which could encourage me to get into the investment habit.

Alice Douglass is a financial adviser – living, not robo – with Grosvenor Consultancy in Highworth, Wiltshire. She says: ‘There is certainly a place for robo-advisers. They can save you money and offer great value.

‘But in my opinion there is still no substitute for the one-to-one support offered by an independent financial adviser.’