Organizers of Aretha Franklin’s funeral insist it will be a service, ‘not a concert, show or awards production’.

Yet the Queen of Soul’s final send-off on Friday certainly will encompass many elements, emotions and grand entrances that were hallmarks of her more than six decades on stages.

The invitation-only funeral at Detroit’s Greater Grace Temple, which caps off a week of events that included high-profile public viewings and tribute concerts, comes with all-star speakers and performers.

Say the name: The walls of the church where Franklin first learned to sing gospel were decorated with balloons spelling ot her name and posters 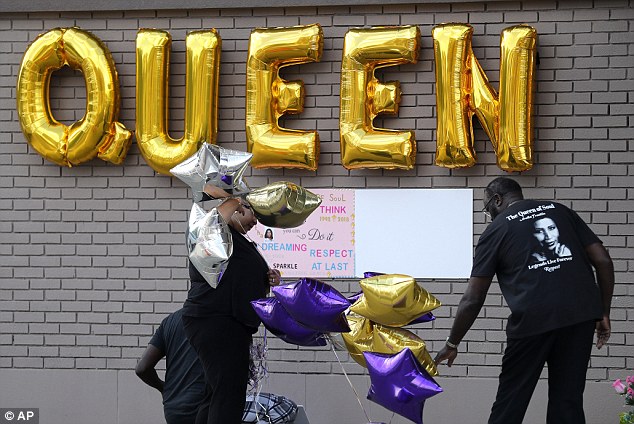 All hail the ‘Queen’: Mourners left balloons shaped like stars beneath a sign on the walls of the church spelling out ‘Queen’ on Day 3 of Franklin’s public viewing

Among those offering words will be former President Bill Clinton, Rev Jesse Jackson and Smokey Robinson.

The street outside Greater Grace will be lined with pink Cadillacs – a nod to Franklin’s funky ’80s tune, ‘Freeway of Love,’ which prominently featured the car in the lyrics and video. 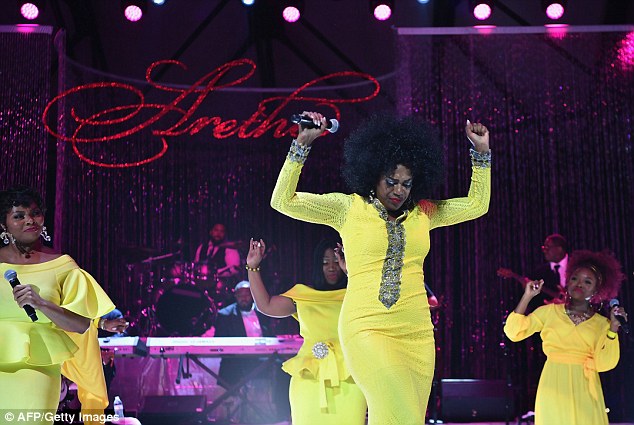 More than 40 artists took the stage at ‘A People’s Tribute to the Queen’ concert in Detroit, Michigan Thursday night 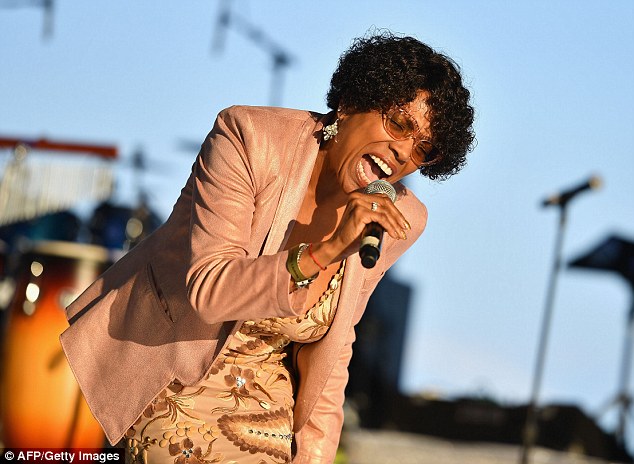 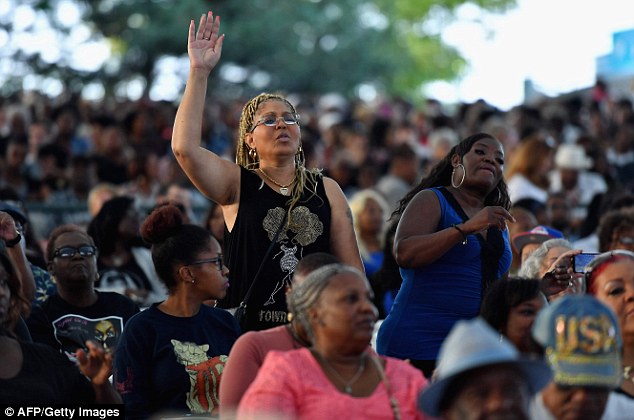 Free tickets were snapped up within minutes of being made available online at the 5,000-seat amphitheater

Her casket has been carried this week by a 1940 Cadillac LaSalle hearse that also took Franklin’s father, legendary minister CL Franklin, and civil rights pioneer Rosa Parks to their final resting places at Woodlawn Cemetery, where the singer will join them.

Bishop Charles Ellis III of Greater Grace knows well of the boldface guest list and surrounding pomp and circumstance, but he has a higher mission in mind for the service that may well exceed five hours.

Ellis said: ‘It is my goal and my aim to ensure that people leave here with some kind of spiritual awakening. This is not a concert, this is not a show, this is not an awards production.

‘This is a real life that has been lived, that a person regardless of how famous she became no matter how many people she touched around the world, she still could not escape death. 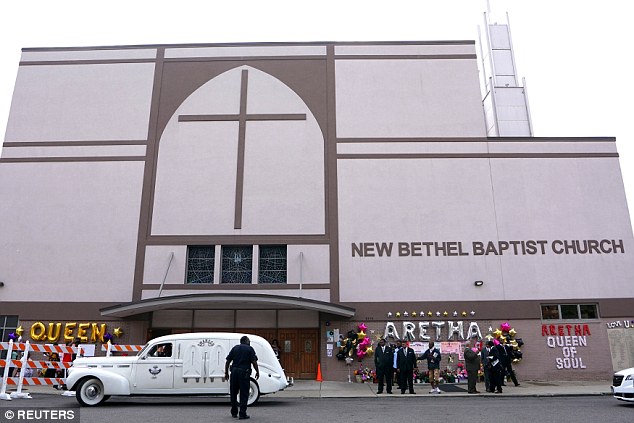 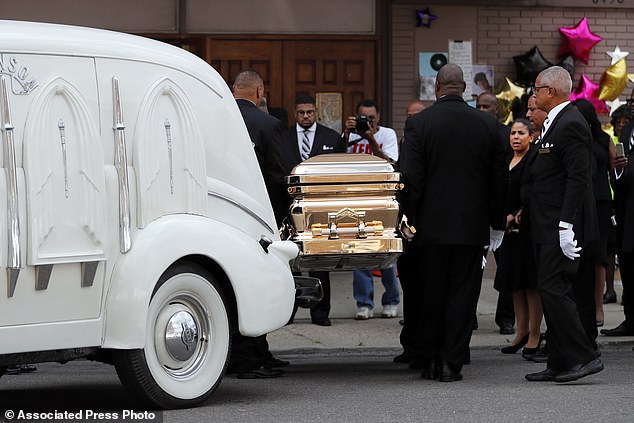 ‘Of course, some get-down and lift-up need not be mutually exclusive. I really believe that this … is going to be an eye-opening experience for everybody in the world watching,’ said gospel artist Marvin Sapp, also among the scheduled performers.

‘We really celebrate because we really recognize that those we call the dearly departed, they wouldn’t want for us to cry and be sad and sorrowful. But they would want us to celebrate their lives because they transitioned from this life to a better one.’ 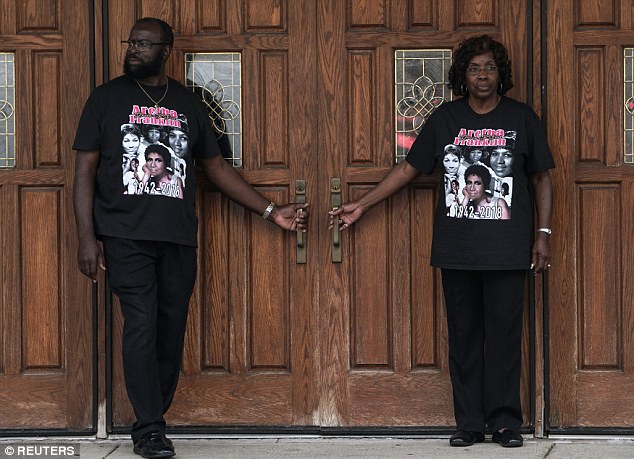 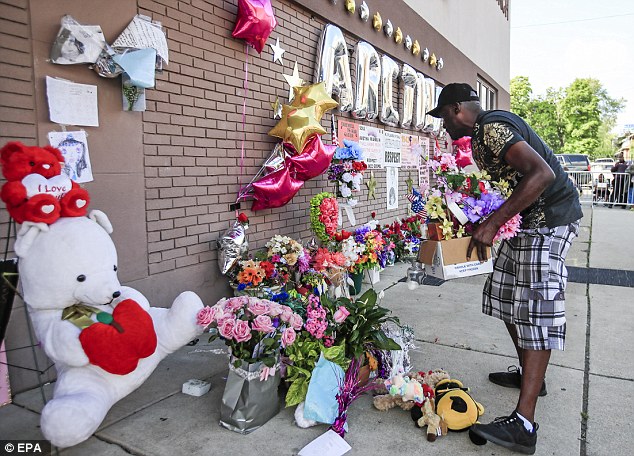 Man-made garden: A man works on a growing makeshift memorial for Franklin outside the New Bethel Baptist Church

Sapp wouldn’t reveal what he will perform Friday, but said every song is one picked out by Franklin. Robinson also didn’t share what he will say, but that’s for a different reason.

‘I do not plan anything (with) someone I love like that,’ Robinson, a Motown great who grew up with Franklin, said. ‘I love her. She was my longest friend.’

Robinson said he will just make it ‘personal,’ since he remained close with Franklin until the end.

He said they ‘talked all the time,’ the last just a couple weeks before she became too ill to speak. 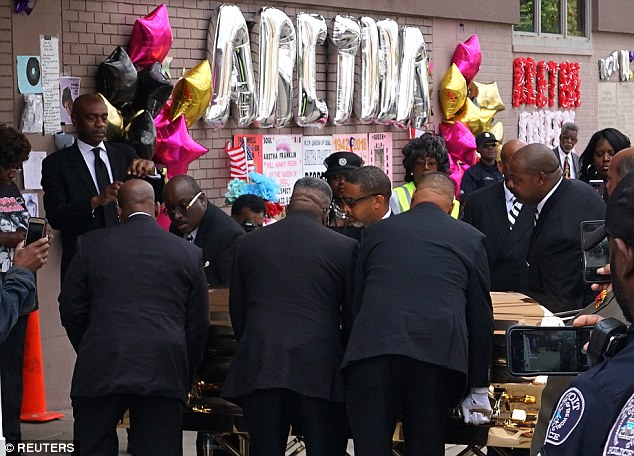 Franklin reposed in her rose gold gown in the polished bronze casket, pictured being carried into the church 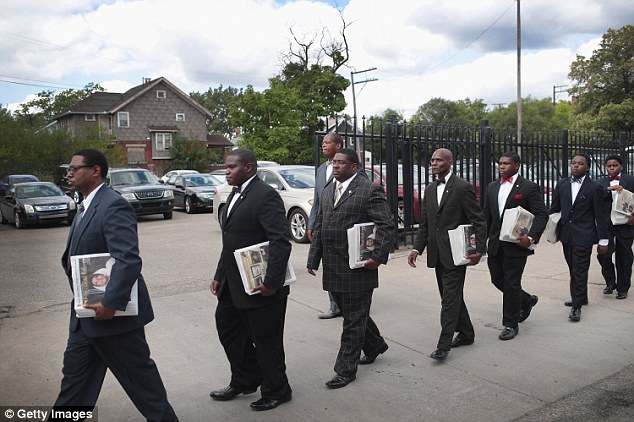 ‘We saw all of our other close friends go,’ Robinson said. ‘We used to talk about that – we saw a lot of soldiers go.’

Amid the sadness of these days, Robinson can find uplift – and believes Franklin’s legacy is secure. A new generation of singers like Grande who are inspired by the late Queen of Soul is just the beginning.

‘There are some girls who haven’t been born yet … who will be inspired by Aretha,’ he said.

Since Franklin’s August 16 death at 76, Owens said a close group she described as ‘Aretha’s angels’ have ‘worked tirelessly’ and have been guided by a single question: ‘What would Aretha want?’

‘After all she gave to the world, I felt we needed to give her an appropriate send-off that would match her legacy,’ Owens said.