Higuain had threatened to steal the show, scoring two first-half goals to send Argentina on their way past Venezuela and into a semi-final clash against the United States next week in Houston, but the key figure, as it invariably is, was the Barcelona star.

Messi started his first game in this tournament, having only appeared twice as a substitute after suffering a back injury beforehand, and he ran the show, carving out Higuain’s first goal brilliantly, scoring himself and setting up Erik Lamela for the fourth. 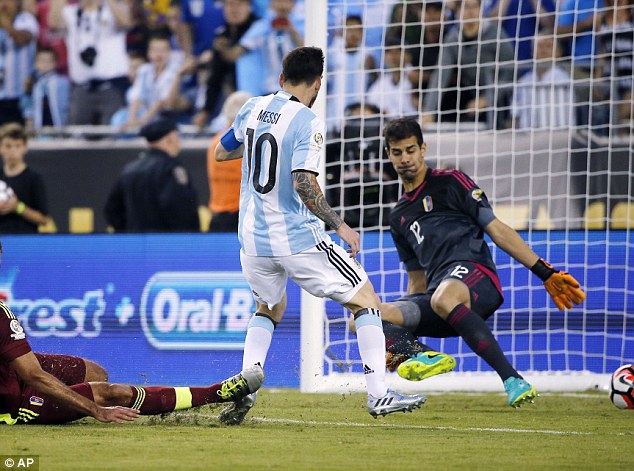 When Messi fired home in the 60th minute it was his 54th international goal, equalling the all-time record of legendary Albiceleste forward Gabriel Batistuta.

However, his finest contribution came just eight minutes in. He set a goal up for Higuain, who was clearly still playing with confidence flowing through his veins after a superb season with Napoli.

Messi, with the ball on the right flank, about half-way into the Venezuela half, saw something nobody else did. With a dig of his left boot he lofted a pass over two midfielders and between both centre backs, with Higuain running onto it and dispatching it into the bottom left corner.

Time stood still with the ball in the air, Venezuela’s defenders immobilised, and Higuain darted in to finish. It was a beautiful goal and the polar opposite of his second, which followed 20 minutes later.

Ticket sales jumped by several thousand after it was confirmed Argentina would be in this match, with fans desperate to catch a glimpse of Messi in the flesh. This was why.

Asked about his record after the game, Messi said in his usual humble style: ‘It’s important for what it means to be the top scorer, because it’s Bati, but what makes me happier is the team, the result, because we made it to the semis.’ 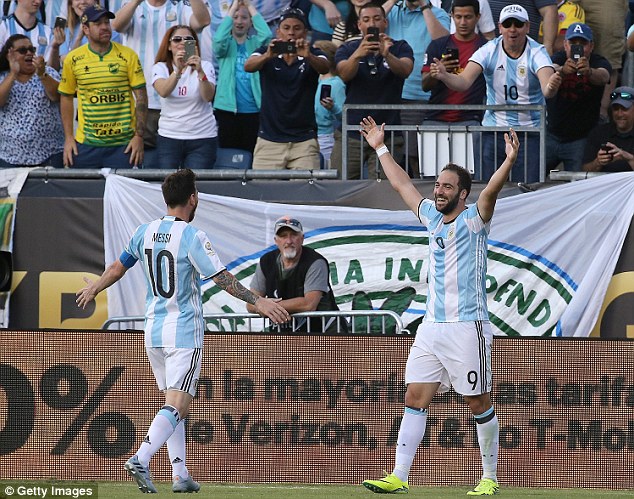 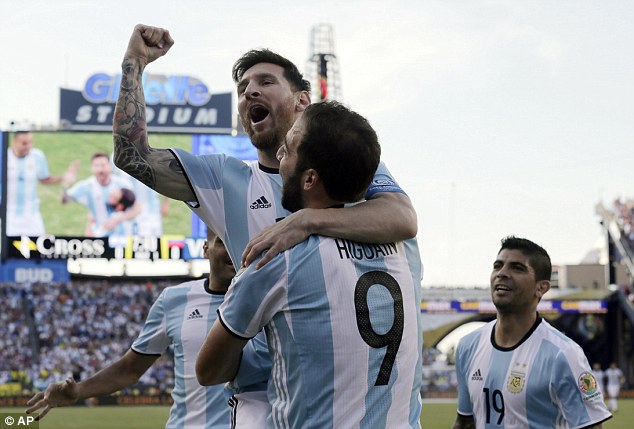 Between Higuain’s two strikes there was plenty of action, with Messi hooking an effort wide after Venezuela’s goalkeeper rushed out as the defence panicked, while Sergio Romero tipped a header from his own defender, Gabriel Mercado, round the post.

Salomon Rondon lunged for a ball tossed back into the box and failed to meet it by inches, while at the other end Messi was denied a clear penalty when Arquimedes Figuera took him down in the box.

He looked up from the floor, bemused by the decision, but the play had already moved on and referee Roberto Garcia was running from the scene.

Coach Tata Martino said after the game that he wasn’t pleased with the decision, when he was asked about Venezuela repeatedly fouling the star. 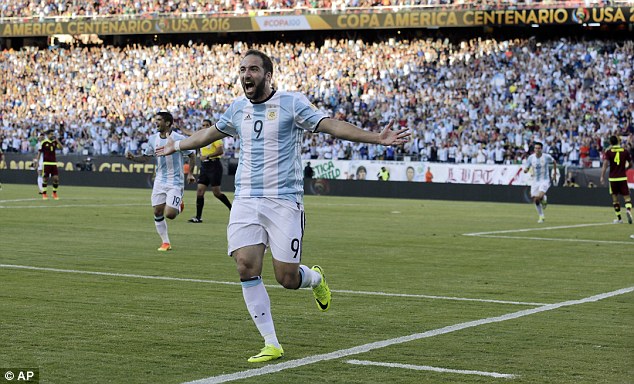 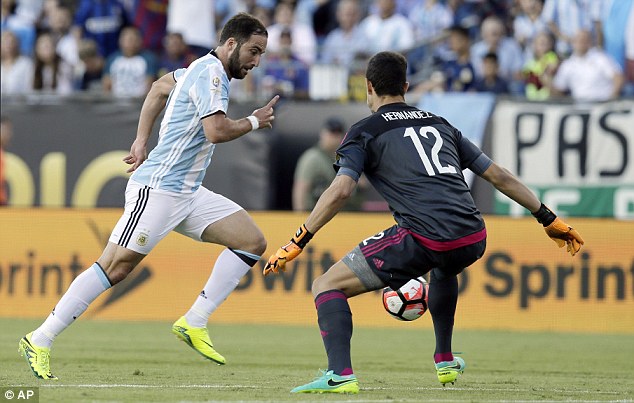 ‘The only thing that left me a bit unhappy was the penalty that they didn’t give,’ he explained.

‘Messi knows that these things happen, he knows he’s a game-changer and he knows that everybody is going to try to cancel him out.

‘We are very happy with how he has recovered, his recovery has reenergised the team and we are very happy because of that. We are happy to have him in shape for the semi-finals.’

The referee’s mistake wasn’t to matter. A few minutes later Higuain made it two, after Figuera played a horrendous, careless, inexcusable pass back towards his goalkeeper, which was far too short.

Argentina’s No 9 raced onto the ball, rounded Dani Hernandez and rolled into the empty net to double his team’s lead. That should have been the game done and dusted, but Martino’s side still has frailties, which Venezuela were able to exploit. 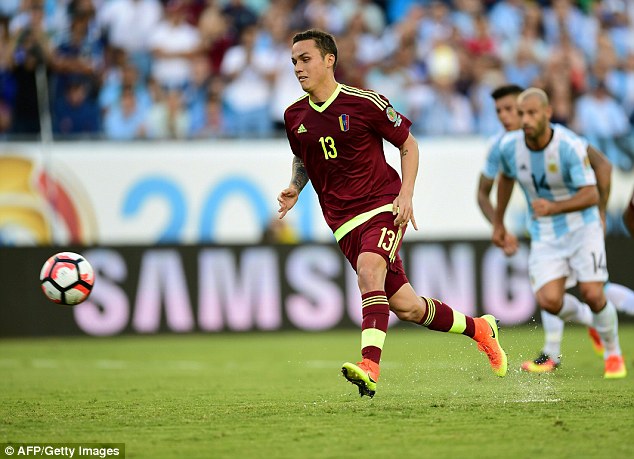 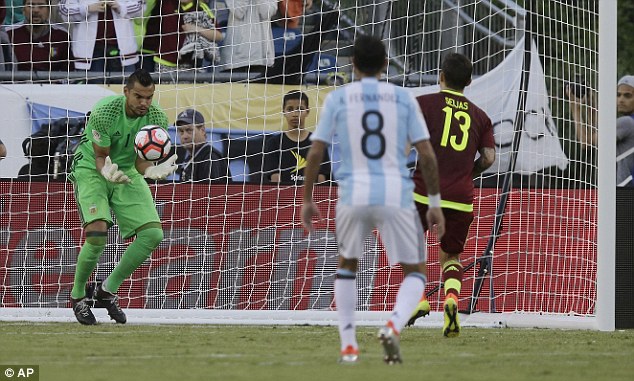 USA vs Argentina – Wednesday, 2am

Colombia vs Chile – Thursday, 1am

West Brom striker Salomon Rondon had two wonderful opportunities, firstly forcing Romero into a fine stop low to his right, then arcing a header off the Manchester United stopper’s upright.

Venezuela were enjoying a fine spell towards the end of the first half and it culminated in a penalty kick, after Romero clumsily took out Josef Martinez in the box. It should have been their way back into the game but Luis Manuel Seijas had other ideas.

The midfielder attempted a Panenka, but Romero wasn’t fooled and stood still, in the middle of his goal, to humiliate Seijas by catching his soft, chipped effort.

Fans in Foxborough, Massachusetts got what they wanted in the 60th minute, when Messi fed Nicolas Gaitan who played it back to him, slicing Venezuela’s defence apart. Messi rolled home to make it three. 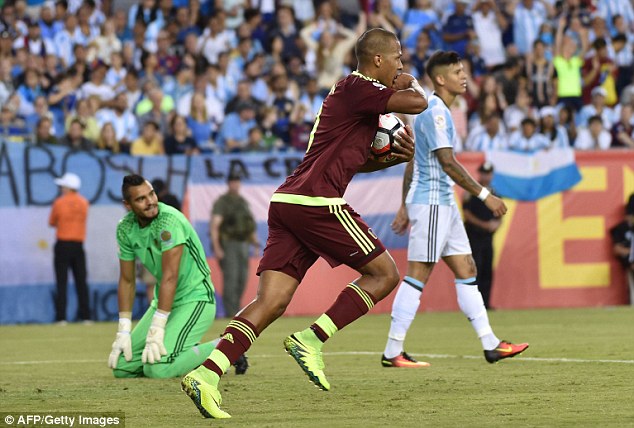 There was a glimmer of hope for Venezuela when Alejandro Guerra curved a peach of a cross onto Rondon’s head after 70 minutes, with the forward nodding in off the post, but one minute later Argentina had extended their lead.

It was another assist for Messi, knocking the ball to Lamela, who fired home with the aid of a deflection. That was goodnight for Venezuela, who finished their superb run of performances in the Copa America with a creditable display, which didn’t merit such a heavy scoreline.

But when you play against a team with Messi at its core, these things tend to happen. He is relishing the challenge of taking on the USA.

‘The United States try to get close to you, to attack, they’re a very difficult team,’ he said. ‘We have to do what we have been doing up until now. We are growing and that’s the way we have to carry on.’ 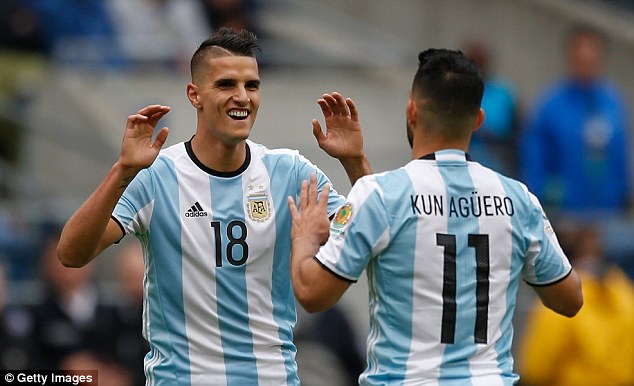 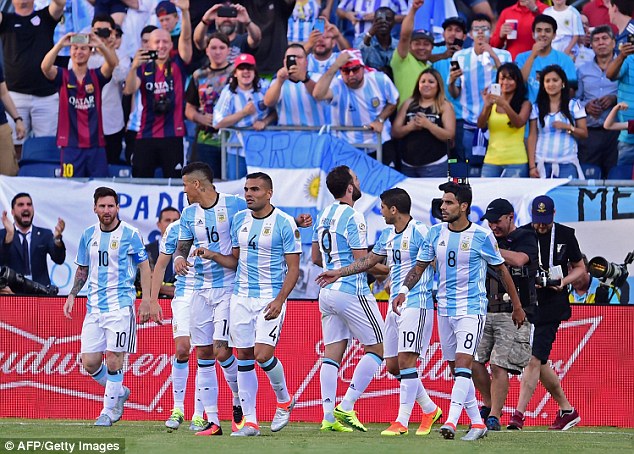