Argentina is going ahead with a war crimes case against Saudi Arabia’s crown prince Mohammed bin Salman – as he jetted into Buenos Aires for the G20 summit.

Human Rights Watch asked Argentina on Monday to use a war crimes clause in its constitution to investigate any involvement by the crown prince in possible crimes against humanity in Yemen and journalist Jamal Khashoggi’s murder.

The advocacy group wrote to the federal prosecutor arguing that the Argentinian courts should prosecute 33-year-old Prince Mohammed under Argentinian law.

On Wednesday, Sarah Leah Whitson, HRW’s executive director in the Middle East and North Africa, announced on Twitter that Argentina is proceeding with the case.

She added that the prosecutor has asked the judge to request information from Yemen and Saudi Arabia’s governments about the alleged crimes.

Earlier, a representative of the federal prosecutor’s office that has been assigned the case told Reuters on Wednesday that the prosecutor was still reviewing the request.

But after revealing Argentina would be moving forward with the case, HRW executive director Ken Roth said: ‘The Argentina judiciary, by taking steps toward a formal investigation into Saudi Crown Prince Mohammed bin Salman, is sending a clear message that even powerful officials are not above the law and will be scrutinized if implicated in grave international crimes.’

He added: ‘World leaders would do well to think twice before posing for pictures next to someone who may come under investigation for war crimes and torture.’

HRW’s announcement on Wednesday came shortly after Prince Mohammed landed in Buenos Aires for the G20 summit of industrialized nations, a visit fraught with controversy over the killing of the Saudi journalist.

He arrived in Buenos Aires from Tunisia, where he was met by protesters who denounced him as a murderer for the killing of Khashoggi.

He was greeted by Argentine foreign minister Jorge Faurie. 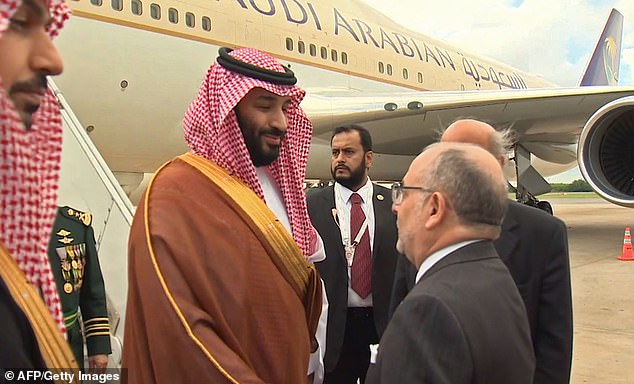 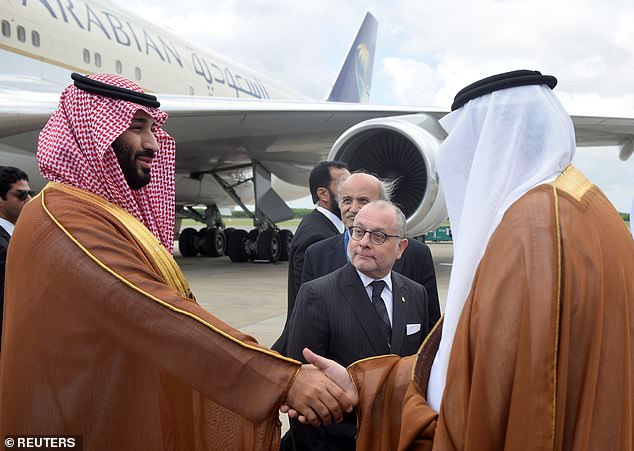 The killing of Khashoggi, a Washington Post columnist and a critic of the crown prince, at the Saudi consulate in Istanbul six weeks ago, has strained Saudi Arabia’s ties with the West and battered Prince Mohammed’s image abroad.

Saudi Arabia has said the prince, the kingdom’s de facto ruler, had no prior knowledge of the murder.

Western nations are also calling for an end to the Saudi-led military campaign in neighboring Yemen, which was launched by Prince Mohammed, as a humanitarian crisis there worsens.

Meanwhile, UN Secretary General Antonio Guterres, who is seeking an end to the war in Yemen, said he is willing to meet with Prince Mohammed when he attends the summit.

‘I think we are close to (creating) the conditions for the possibility for (Yemen) peace talks to start,’ he said on Wednesday.

‘And of course Saudi Arabia is absolutely crucial for that purpose, and I’m ready to discuss it with the crown prince or with any other Saudi officials because I believe it is a very important objective at the present moment.’

At the summit, Prince Mohammed is expected to represent Riyadh in the face of a global outcry over Khashoggi’s murder.

He is likely to face Turkey’s Erdogan, who has kept international pressure mounting on the kingdom over the grisly killing in a Saudi consulate in Istanbul on October 2.

The summit would also be an opportunity for the prince to discuss energy markets with leaders of other top oil producers – notably Russia and the United States – amid the current slump in oil prices.

The writ presented by HRW was received at the court of federal judge Ariel Lijo, who forwarded it to federal prosecutor Ramiro González.

Argentine lawmakers and the prosecutor had to try to decide whether Prince Mohammed is covered by the ‘universal jurisdiction’ mentioned in the country’s constitution.

Judicial sources within Argentina’s legal system said bringing a case against the prince would be ‘very difficult’.

Lawmakers said the case would rely on both the prince’s alleged connection to war crimes in Yemen as well as the Khashoggi killing.

‘Since March 2015, the Saudi-led coalition has carried out scores of indiscriminate and disproportionate airstrikes on civilians and civilian objects in Yemen, hitting homes, schools, hospitals, markets, and mosques,’ an HRW statement said.

‘Many of these attacks – if carried out with criminal intent – indicate possible war crimes.

‘The coalition has also imposed and maintained a naval and air blockade on Yemen that has severely restricted the flow of food, fuel, and medicine to civilians. Millions of civilians face hunger and disease.’

A source from President Mauricio Macri’s office Monday declined to comment on the request for Mohammed bin Salman’s arrest should he land on Argentinian soil.

‘We can make no comment on that. All we can say is that Mohammed bin Salman’s attendance remains confirmed, we have received no contrary information so far,’ the source told the Guardian.