Argentina finally look to have turned a corner after beating South Africa 32-19 in Mendoza — something which may concern England coach Eddie Jones.

It was the Pumas’ first Test win against top opposition in two years, having won only three of their last 23 Tests.

The 21-year-old wing Bautista Delguy was in electric form, scoring two wonderful tries as the Argentinians won with something to spare against Rassie Erasmus’ side that beat England twice in June.

Argentina’s revival under coach Mario Ledesma is timely as they will meet England in the 2019 World Cup ‘Pool of Death’ in Japan, alongside France, Tonga and the United States.

Erasmus meanwhile was livid. ‘It was embarrassing and not the kind of performance you expect to see from the Springboks,’ he said.

In the other fixture in the Rugby Championship, New Zealand battered Australia 40-12, with Beauden Barrett scoring a record four tries in the second Bledisloe Cup match. The All Blacks retain the trophy for the 16th season.

Finn Russell made a stunning debut for Racing 92, as the Parisians won 25-9 at Toulon. 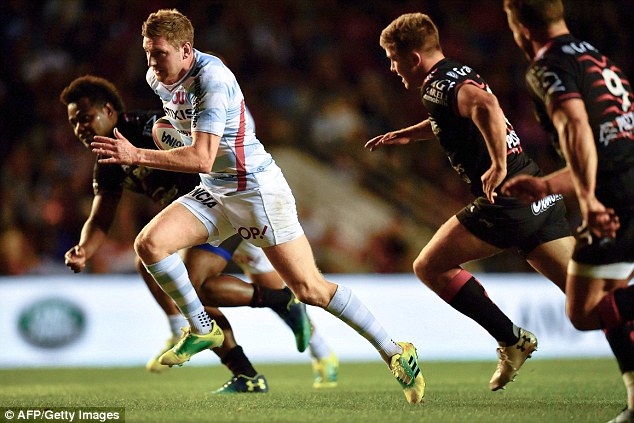 The Scotland fly-half scoring 20 points, including two tries, in his first Top 14 appearance.

There was a minor scare for Northampton’s Dan Biggar, who went off with a head knock in the Saints’ 41-15 pre-season win against Glasgow on Friday night.

He was accidentally kneed in the head by his scrum-half Cobus Reinach but is expected to be fit for Saturday’s trip to Gloucester.