Argentinian man takes selfie of his girlfriend snogging another man

A man who caught his girlfriend cheating on him snapped a selfie with her kissing someone else.

Mariano, 20, from Quilmes in Buenos Aires, Argentina, turned up at a party alone to see his girlfriend locked in a passionate embrace with another man.

He decided to sit down next to them and take a selfie as they kissed.

His girlfriend reportedly did not find out that Mariano had caught her in the act until he uploaded the selfie to Twitter.

‘My girlfriend (now ex) did not realise we came to the same party,’ he captioned the picture.

After the photo went vial and amassed almost 70,000 likes, Mariano posted screenshots of girlfriend’s excuse for the infidelity.

Alongside screenshots, he wrote on Twitter in Spanish: ‘Well here is the end of everything (nothing great) but I know that most wanted to know who was the most wanted girl in Argentina, I feared the insults she received did not want to label it, but it is understood that I take it with humor and it stays there.’ 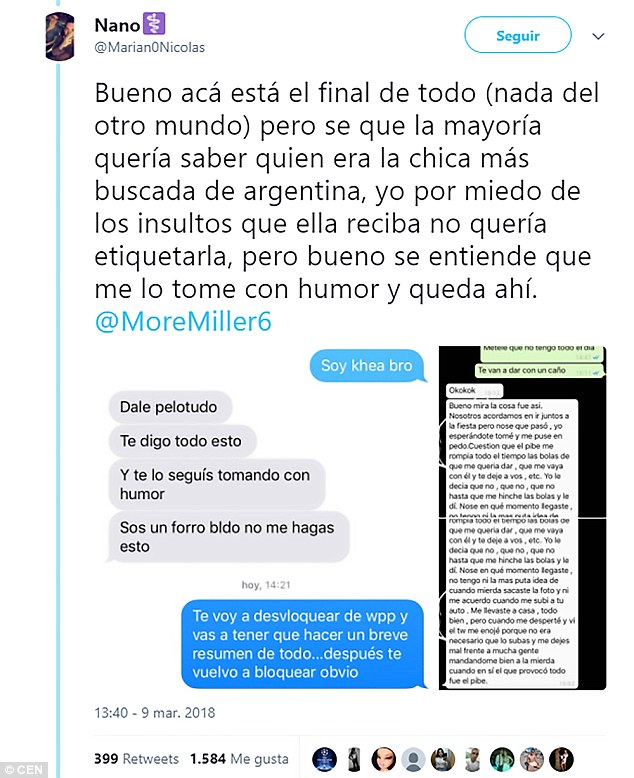 After the photo went vial and amassed almost 70,000 likes, Mariano posted a screenshot of his girlfriend’s excuse for the infidelity

In the messages, she wrote: ‘I was very drunk and the fatty was very insistent with me, he told me loads of things and I do not know how it came to that.

‘I seriously love you and I want to be with you.’

Mariano responded with a laughing emoji, adding: ‘You could have made a bit more of an effort.’

She added: ‘I tell you all this and you keep taking it as a joke. Do not do this to me.’

In another part of the exchange, she said: ‘We agreed to go together to the party, but I do not know what happened.

‘I do not know when you arrived, I do not have the slightest idea of ​​when you took the picture and I do not even remember when I got into your car.

‘You took me home, all right, but when I woke up and saw it.’

The couple have now split up.