Argo Blockchain profits jump 2,000% thanks to boom in crypto prices

Argo Blockchain profits jump 2,000% thanks to expansion of its mining operations and boom in crypto prices

Crypto mining firm Argo Blockchain saw first-half profits skyrocket 2,000 per cent thanks to a boom in the price of digital currencies and an expansion of its operations.

The London-listed company saw pre-tax profits grow from £500,000 in the first half of last year to £10.7million in the past six months, as revenues almost tripled to £31.1million, from £11.1million.

It comes as Argo Blockchain has benefited greatly from the growing popularity of cryptocurrencies seen this year, with its shares rising from just 5p a year ago to a record of around 300p in February.

The price of bitcoin, the most recognisable cryptocurrency, hit a record high of above $60,000 in mid-April, although it halved to below $30,000 in late June after a crackdown on mining by China.

Mining is the process through which companies like Argo Blockchain create new cryptocurrencies.

They do so by adding transaction records to a cryptocurrency’s public ledger of past transactions, or blockchain, through specialised computers.

It currently takes around 10 minutes for powerful computers to mine bitcoin, which is the most commonly mined crypto.

The energy consumed in doing so is more than that used in the whole of Argentina, according to estimates by the University of Cambridge.

Argo Blockchain has been expanding its operations, with a new mining facility in West Texas announced in April.

It said its mining capacity increased from 685 petahash at the end of last year, to 1,075 petahash at 30 June. 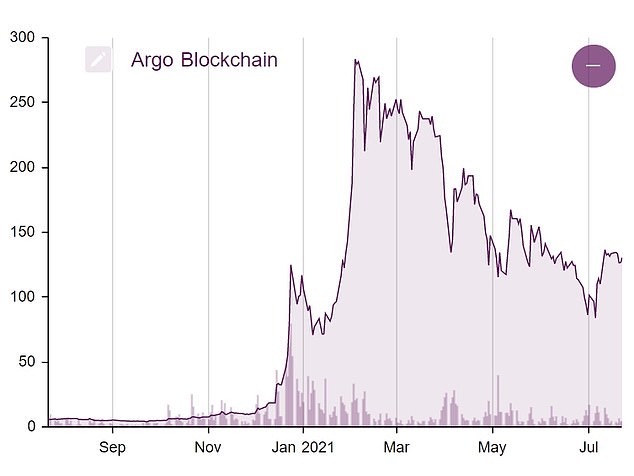 The firm also reported a mining margin of 81 per cent, a sharp rise from 39 per cent the year before.

But the total number of bitcoin and equivalent mined in the period fell to 883 from 1,669 last year, which the company said was due to bitcoin ‘halving’ in May, which made the crypto more difficult to mine.

Meanwhile, Argo’s bitcoin holdings jumped to 1,268 coins at the end of June, from 127 the year before.

But the company said China’s crackdown on mining caused ‘an unprecedented drop in global hashrate and mining difficulty’ in the industry.

But it added: ‘We believe Argo is well positioned to capitalise on the emerging trends in the market through its large and highly efficient mining infrastructure and experience.

‘The group will also continue to manage growth through the expansion of the size and quality of its mining infrastructure, as well as strategic opportunities that leverage its leading market position.’

Shares in Argo Blockchain fell 2 per cent to 128p in afternoon trading today, continuing their descent from the record high of around 300p they hit in February.

However, the company’s shares are still around 2,500 per cent higher than a year ago, when they were trading at just 5p.

Chief executive Peter Wall said: ‘We have capitalised on a change in market conditions in the first half of 2021 to deliver strong growth in both revenues and profits, demonstrating that our smart growth strategy is delivering value to shareholders.’

What is Argo and crypto mining?

Founded in 2017 and based in the UK, the company operates a global data centre providing a low-cost and consumer-friendly service for the mining of leading crypto-currencies.

Any decentralised cryptocurrency powered by a ‘Proof-of-Work algorithm’ can be mined. A few of the most popular coins to mine today are bitcoin, ethereum, and ZCash.

Argo’s cloud-based Mining as a Service platform is available to anyone, anywhere in the world on a monthly subscription.

What is crypto mining?

It is the process of verifying ‘blocks of transactions’ of a certain cryptocurrency and adding each new block to its network.

Each block of transactions has a complex mathematical hash function associated with it that requires significant computing power to solve.

The miner who solves the function first receives the cryptocurreny as a reward for supporting the network and adding a new block to the blockchain.