Seemingly harmless, everyday conflicts can make youngsters incapable of interpreting emotions that are not extreme, which may affect their relationships in later life, according to researchers.

This is thought to be due to such children learning to interpret parental anger as a time to retreat, while happiness suggests their surroundings are ‘safe’.

Shy children are particularly affected by such conflicts, the research adds.

Although children of argumentative parents are able to interpret extreme emotions, more subtle expressions pass them by, the study found.

Lead author Professor Alice Schermerhorn, from the University of Vermont, said: ‘The message is clear: even low-level adversity like parental conflict isn’t good for kids.’

IS GETTING DIVORCED LINKED TO EATING DISORDERS?

Women in their 40s are at risk of developing bulimia or anorexia due to life changes such as a marriage breakdown or death of a parent, a study found.

Although middle-aged women were previously thought to have passed the ‘window of risk’ for eating disorders, which are often associated with teenagers, emotional upheaval may trigger such conditions.

Rebecca Field from the eating disorder charity Beat said: ‘Eating disorders come at all ages, not just for people under the age of 18, and there are many life changes like divorce and bereavement which happen to people in later life and can act as triggers.

‘One environmental factor might be changes in normal daily life and routine. The anxiety from these changes could lead to an eating disorder.’

The researchers, from University College London (UCL) and Icahn School of Medicine in New York, analysed 5,300 women from the UK.

Results revealed 15.3 per cent had suffered an eating disorder in their lifetime, with 3.6 per cent reporting one in the past year.

Women in their forties are at a higher risk of bulimia if their mother gave them little affection.

A good mother-daughter relationship is associated with a 20 per cent reduced likelihood of developing the disorder.

The death of a parent in childhood makes people seven times more likely to develop bulimia.

Lead author Dr Nadia Dr Micali, from UCL, adds many middle-aged women are not seeking help for their eating disorders and hopes the results of the study will encourage them to get assistance.

The researchers analysed 99 children aged between nine and 11, of which 56 were male.

The children were shown photographs of actors posing as a couple expressing anger, happiness or neutrality towards one another, which they were asked to define.

They also reported on any conflict between their parents.

The youngsters’ mothers completed questionnaires regarding their children’s shyness.

Children of arguing parents are less able to read emotions

Youngsters whose parents argue can identify images of couples arguing or being happy, but are confused by those expressing neutrality.

Professor Schermerhorn believes this may be due to such children being overly vigilant, saying: ‘If their perception of conflict and threat leads children to be vigilant for signs of trouble, that could lead them to interpret neutral expressions as angry ones or may simply present greater processing challenges.’

Professor Schermerhorn said: ‘They may be more tuned into angry interactions, which could be a cue for them to retreat to their room, or happy ones, which could signal that their parents are available to them.

‘Neutral interactions don’t offer much information, so they may not value them or learn to recognize them.’

Being shy also makes children less able to read emotions, even if they do not have temperamental parents.

Professor Schermerhorn added: ‘Parents of shy children need to be especially thoughtful about how they express conflict.’ 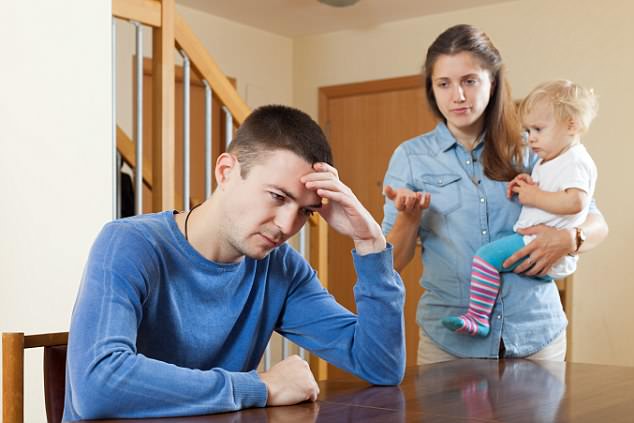 Speaking of the impact of the study’s findings, Professor Schermerhorn said: ‘One the one hand, being over-vigilant and anxious can be destabilizing in many different ways.

‘On the other, correctly reading neutral interactions may not be important for children who live in high conflict homes, but that gap in their perceptual inventory could be damaging in subsequent experiences with, for example, teachers, peers, and partners in romantic relationships.’

She adds parents should ensure their children are aware they still care about each other even if they are arguing.

The findings were published in the Journal of Social and Personal Relationships.