By Aidan Wondracz For Daily Mail Australia and Reuters

Titmus snatched victory away from her US rival and five-time Olympic champion Katie Ledecky after recording 3:56.69 minutes.

Ledecky followed in second place with less than a second difference after finishing in 3:57.36 minutes.

Buzz had been generated ahead of the race as Titmus was set to challenge Ledecky for the top gong.

An undefeated Ledecky had ruled the pool before Titmus upset her 28 race winning streak at the 2019 world championships held in Gwangju, South Korea.

The American swimmer will have to defend her Olympic crown in three enthralling races at the Tokyo Olympics this week, with the young Australian swimmer biting at her heels.

Titmus, 20, said she was aware of not over-exerting herself ahead of Monday’s medal clash of the two biggest stars of women’s swimming.

Buzz had been generated ahead of the race as Titmus was pitted against US rival and five-time Olympic champion Katie Ledecky (pictured, Titmus after managing 4:01.66 minutes in heat three on Sunday)

‘I felt really good, probably the most relaxed I’ve actually felt in a while… I felt like tonight was really about trying to conserve your emotions for tomorrow morning, so I’m happy to be in one of the middle lanes in the morning,’ she said.

‘I’d like to think I’ve got a bit more on the tank for the final. I’m relieved it’s finally here and I know that I’ve done the work,’ she added

‘It’s always good to get the first race under the belt. I felt confident and relaxed going into it,’ said Ledecky.

‘It’s going to be a great race with Ariarne. I’m really excited to be in that first final tomorrow… we have put in really good work over the last five weeks or so. It´s good to get out there,’ she added.

For nine years, since bursting on the world scene aged 15 at the 2012 London Olympics where she won the 800m freestyle, Ledecky has ruled the pool.

A year after London, she dominated the world championships in Barcelona, taking gold in the 400m, 800m and 1500m.

In 2015 at the world championships in Kazan, Russia, she went one better, defending her three titles and adding the 200m freestyle for good measure.

Then came the Rio Olympics, where she totally demoralised her rivals in the 200m, 400m and 800m freestyle. 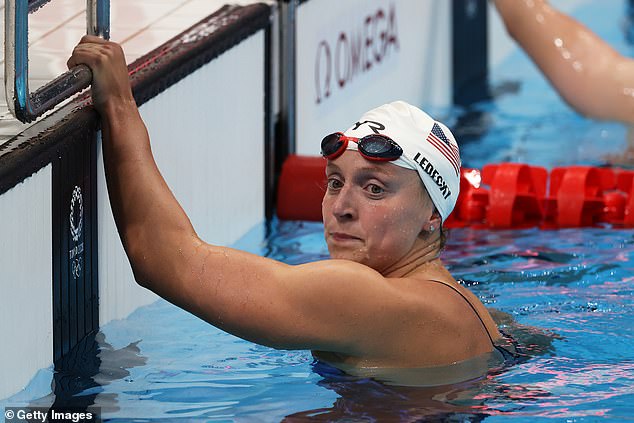 Ledecky, 24, (pictured in Sunday’s heat) the world record holder and Olympic champion in the event, finished her heat in 4:00.45

Tasmanian-born, Brisbane-based Titmus remembers watching on TV as a 15-year-old when Ledecky snared her three-gold medal haul in Rio, setting world records in the 400m and 800m.

It was her ruthless performance in the 800m, which she won by nearly 12 seconds, that earned her the title ‘The Dominator’ and had up-and-comer Titmus shaking her head in awe.

‘No-one is ever going to get near this chick,’ Titmus recalls thinking.

But Titmus herself went on to beat the seemingly un-beatable swimming power house.

At the 2019 world championships held in Gwangju, South Korea, Titmus handed Ledecky her first defeat in 28 races at major events when she swam over the top of her 20 metres out from the wall to win the 400m freestyle final by 1.21 seconds.