Aristocrat, 77, who lay in the road during Extinction Rebellion protest is cleared of charges

A 77-year-old aristocrat who lay in the road during an Extinction Rebellion protest has been cleared of disobeying police instructions after the court agreed she is deaf.

Grandmother Lady Dido Berkeley said she could not hear officers as they read out charges against her during the protest because she suffers from audio dyslexia, which makes it hard to pick out sounds from background noise.

The veteran campaigner was still cleared even after admitting to City of London Magistrates court that she knew she should not be lying in the road in Parliament Square, London, during protests on April 17 last year.

The environmentalist allegedly dated actor Kevin Costner when she was younger and has also lived with Liz Hurley in Los Angeles.

Lady Dido Berkeley, 77, was cleared by City of London Magistrates court even after admitting she knew she should not be lying in the road in Parliament Square, London (pictured) 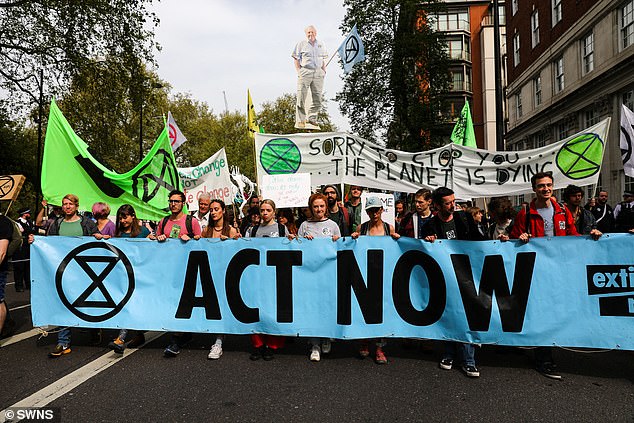 Lady Berkeley said she took the action as she felt it was the ‘only option left for her’ after writing to the government about climate change.

She said she thought she would be an example and get a caution and told police ‘no comment’ when they asked her to move to Marble Arch to continue her protest.

But the environmentalist was arrested for failure to comply with a public assembly order from a senior police officer, carted off in a police van and charged with a public offence.

Lady Berkeley said she had accepted the likelihood that she would be arrested for lying down in the road.

But she was charged for a different offence of which she was cleared because she did not hear the officer state the act. 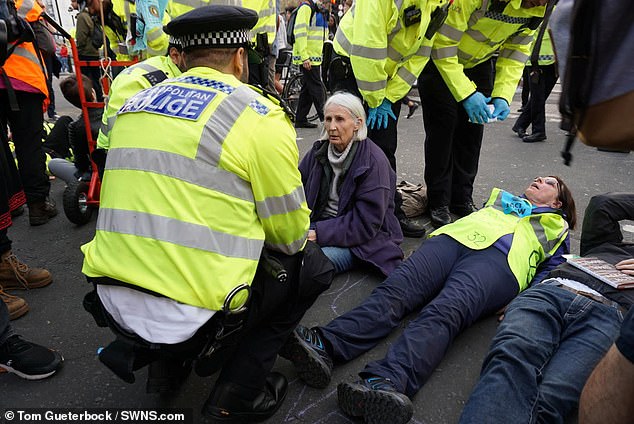 Lady Berkeley, pictured in Parliament Square, London, last year, told London Magistrates Court she took the action as she felt it was the ‘only option left for her’

Lady Berkeley appeared in court with her son, Tom Gueterbock, who works for GreenPeace and was also at the protest.

Mr Gueterbock told the court: ‘She has worked campaigning for the environment for a long time and it was very distressing to think she felt this was the only option left for her to take.

‘She felt it was the only option given the climate we are in.’

Lady Berkeley, who stopped Fulham Football Club from expanding its riverside stadium in 2000, began campaigning 25 years ago to stop the Thames being built over and won a High Court legal battle.

The passionate eco-warrior also participated in a protest in 2018 when she sat down in the road on a street leading from Heathrow airport to the main road, the court heard.

Taking the stand today, Lady Berkeley told magistrates their cups should not be plastic when she was handed a cup of water.

The river campaigner, who grew up along the Thames, said: ‘The government is completely failing to look after our water. 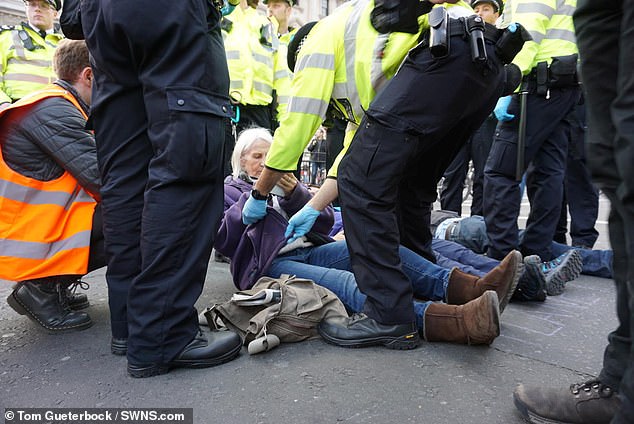 Lady Berkeley pictured in Parliament Square. She was cleared of disobeying police instructions in court because she is deaf

‘My family were walking with Extinction Rebellion. They said we have to come along and block this road.

‘We have been working with the government and DEFRA and nothing happened until Extinction Rebellion came onboard. It has been effective and now it is going around the world.

‘When I arrived at Parliament Square, I came with my son. We walked with a big cavalry. I asked what I should do and I was asked to go and lie down on the road which I did.’

According to her police officers told her ‘congratulations we are really pleased with what you are doing’ and ‘you are doing it for our children’ as she walked along Westminster Bridge before lying down in Parliament Square, the court heard.

The campaigner said she thought officers were pleased and could not understand why they did not try to stop her from lying in the road.

She said: ‘Looking back I cannot understand why nobody stopped me. No officers approached me as I laid down. No one said you can’t be here.

‘I thought they were pleased with what we were doing.’ 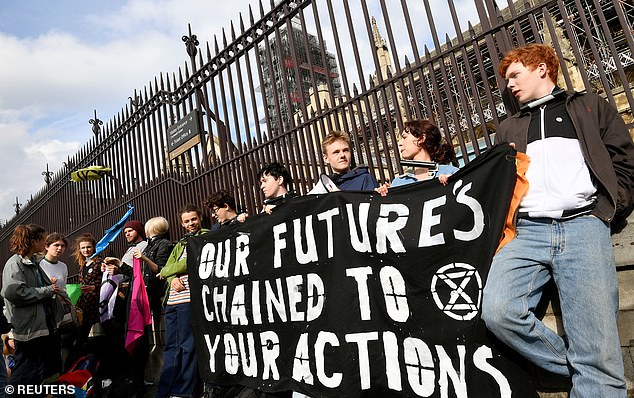 Lady Berekley was charged under section 14 of the Public Order Act which deems ‘a person who takes part in a public assembly’ who ‘knowingly fails to comply with a condition imposed under this section’ to be guilty of an offence.

But she told the court she did not hear the arresting officer when he stated section 14 to her on two separate occasions, according to the officer’s report and witness account in court.

She claimed he was standing at her feet while she remained lying down and that it was ‘just a blur’.

Lady Berkeley said: ‘It was just a blur. It was too much to take in, I just gave up. It was just like hearing another language.

‘He was talking quite quietly. He said so much, it just went over my head. It did not register with my brain.’

Prosecutor Charles Shelton said Lady Berkeley ‘knew full well what she was doing’ and admitted she knew there was a risk of arrest before lying down in the road.

But Charles Streeton, defending, said she could not knowingly fail to comply with the condition because she could not hear what the arresting officer was saying.

He said: ‘She has freely and honestly admitted she should not be in the road but she has not been charged for that offence. 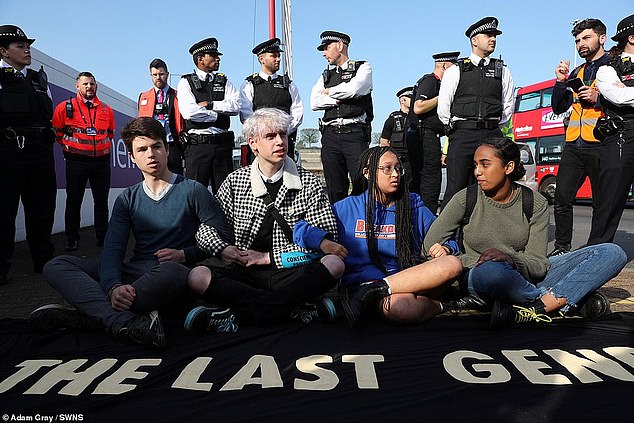 Protesters aged 17 block a roundabout outside Heathrow in April last year. They had a banner which read: ‘Are we the last generation?’

Lead magistrate Marina Lobanov-Rostovsky said: ‘We find that the order was lawfully given and was a proportionate response for the condition at that time.

‘We are not satisfied beyond reasonable doubt today that she heard this order. We therefore find her not guilty.’

Speaking after the trial, Lady Berkeley said: ‘It is a big step to win in order for the greater good and to protect the planet.’