The Arizona man who was accidentally invited to a Vermont bachelor party due to a typo has returned after a weekend of fireworks, ski crashes, and 3am mosh pits.

Will Novak, 35, became a social media sensation when he told the story of how he hilariously ended up on the guest list for Angelo Onello’s bachelor party.

Novak had received an email meant for a different Will Novak in New York, but the party decided to let him come anyway – after vetting him on Facebook, of course.

Now Novak has returned from his weekend away with the boys, documenting their shenanigans on Twitter and Instagram for thousands of fans.

Will Novak (center in white and rainbow) had a blast on the Vermont bachelor party he was accidentally invited to thanks to a typo in an email address. He is pictured here with the party and the ‘real’ Will Novak 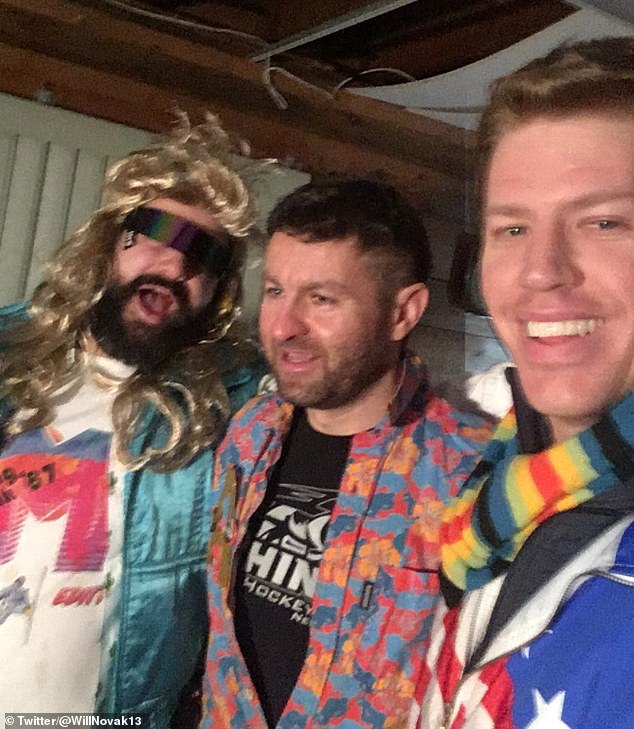 Novak has returned from his weekend away with the boys, documenting their shenanigans on Twitter and Instagram for thousands of fans. This is the first picture he shared of the party

When Novak finally met the famous Angelo – who found out he was coming just days before the trip – it was 3am on Saturday morning.

Novak, who doesn’t drink alcohol, had just driven up to the group’s ski chalet after flying from Phoenix to Boston.

Thanks to his social media fame, Novak was surprised with a $75,000 Maserati SUV when he went to pick up his rental car.

He then drove to Ludlow, Vermont to finally meet Angelo and his famous bachelor party.

‘They’re playing guitars, they’re shredding metal, it was completely insane, they’re doing a mosh pit. They were just partying and going ballistic, it was amazing.’

The first photo Novak shared from the party showed him, Angelo, and the real Will Novak all with their arms around each other.

They didn’t actually make it to bed until 5.30am and Novak slept through his 7.30am ski lesson at the Okemo Mountain Resort. 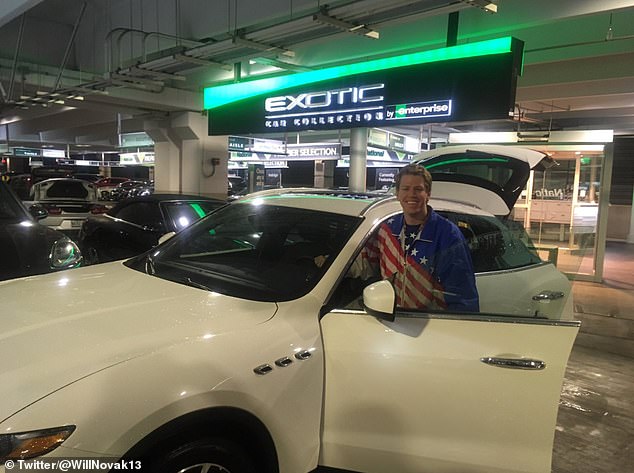 Novak drove up to the group’s ski chalet after flying from Phoenix to Boston, where he was surprised with a $75,000 Maserati SUV as his rental car

‘We went to bed at 5.30am. It’s 9.48am now and we’re starting to wake up. #AngelosBachelorParty is kicking my ass already,’ he tweeted.

The boys did finally make it to the ski resort around 1.30pm, where they greeted by countless fans who had been following along with Novak’s story.

It wasn’t all smooth sailing on the slopes, with Novak crashing into a man on one run and the ‘Real Will Novak’ dislocating his shoulder.

But spirits remained high as a firefighter came up to the boys and said the department would be honored to take them to the bars in fire trucks that night.

‘We were like “Let’s roll!”‘ Angelo recalled. ‘They were cranking the horns, we took a nice photo with them.’

Novak and another man in the group who doesn’t drink helped get the party from one bar to the next and made sure no one drove home drunk, he told USA Today. 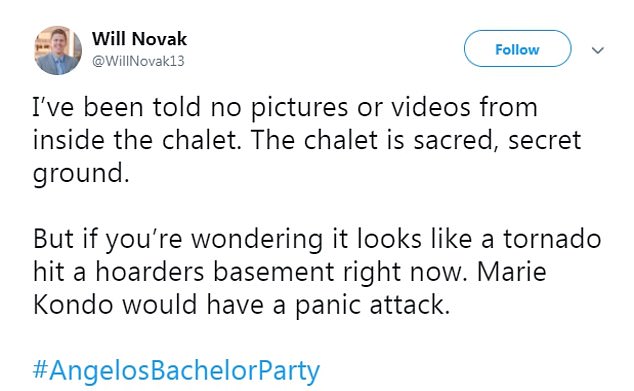 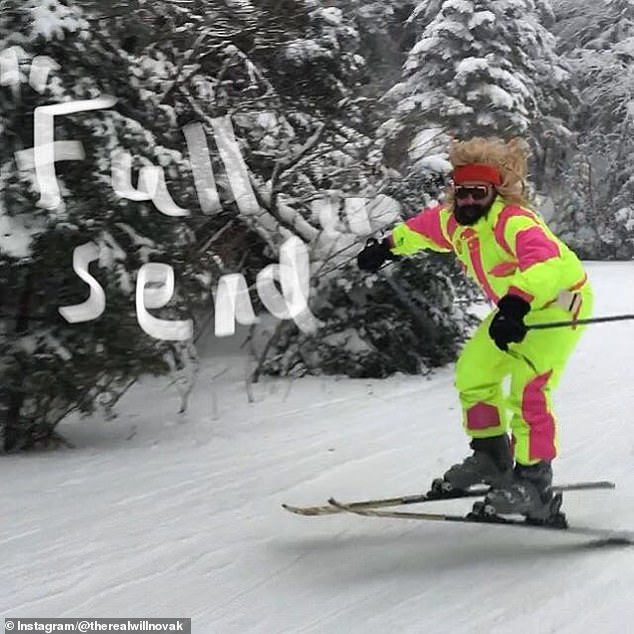 The boys did finally make it to the ski resort around 1.30pm, where the other Will Novak shared a picture of him skiing in the group’s required 1980s ski-inspired gear 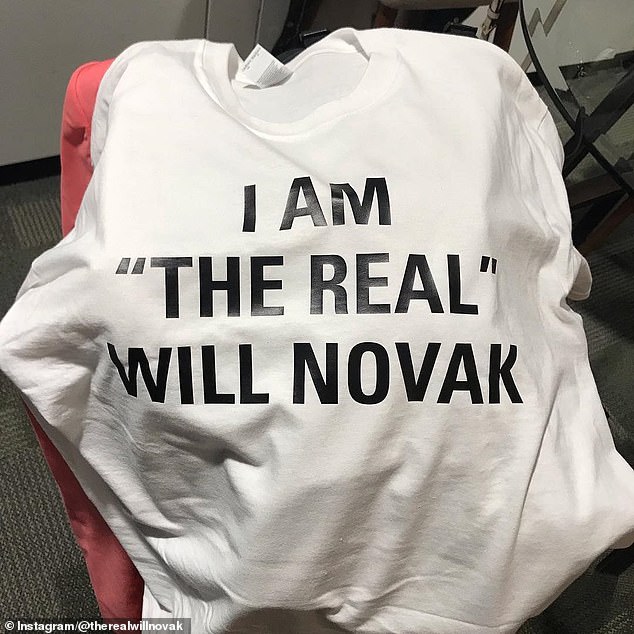 The bachelor party was amazed at how many people knew their names, screaming at them like they were celebrities.

‘Party is winding towards bed at 4:15am. Early night tonight! #AngelosBachelorParty,’ he tweeted that night.

Novak shared few pictures from the chalet, revealing he had been told it was ‘sacred, secret ground’.

‘But if you’re wondering, it looks like a tornado hit a hoarders basement right now. Marie Kondo would have a panic attack,’ Novak added.

‘The condition of our provisions is appalling. We have meat yet no buns. We long ago ran out of water bottles & we have no cups. Yet, the men’s spirits are not broken. Do not send beer. We have an unlimited supply. #AngelosBachelorParty.’ 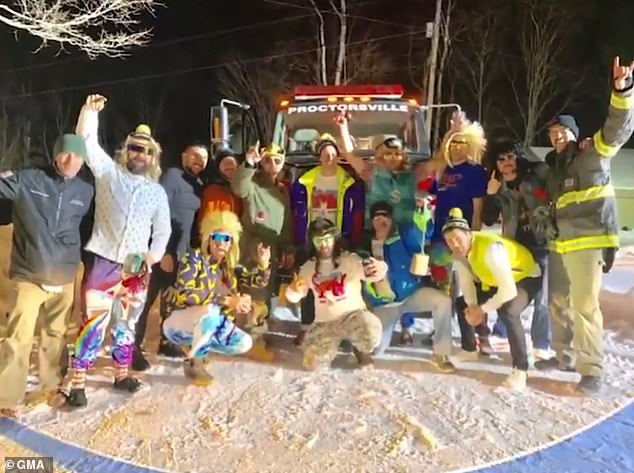 Spirits remained high as a firefighter came up to the boys and said the department would be honored to take them to the bars in fire trucks that night.

Novak ended up having to drive to New York on Sunday after his flight was canceled due to snowstorms.

But the weather mishap landed him, Angelo, the other Will Novak, and Angelo’s brother Devin – who sent out the original email – on Good Morning America.

‘We had a great time, everything fell into place. It was a totally remarkable story and we were just rolling with it,’ Angelo said.

‘We didn’t know what was going to happen and honestly the public out and about made it even better.’

It has been an incredible journey for Novak, who didn’t expect anything to come out of a joke reply he sent off after receiving the bachelor party invitation two weeks ago. 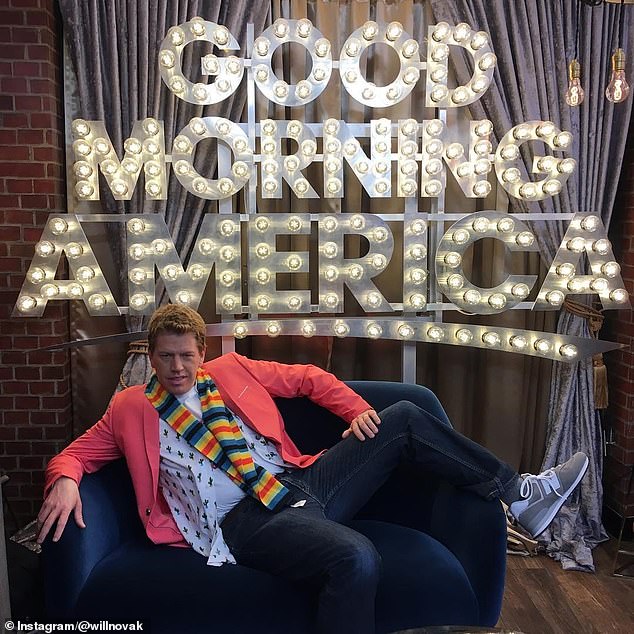 Novak ended up having to drive to New York on Sunday after his flight was canceled due to snowstorms, but the weather mishap allowed him to appear on Good Morning America 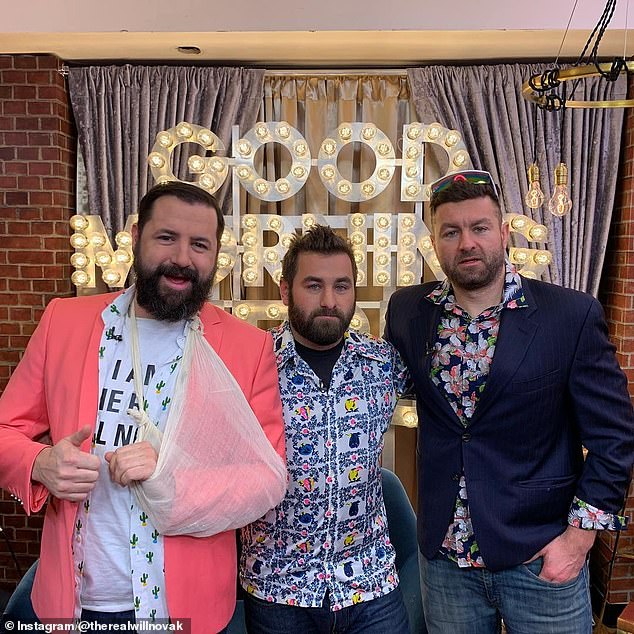 Also joining him was Angelo (right), Angelo’s brother Devin (center), and the other Will Novak – still wearing his famous shirt

‘All, I do not know who Angelo is. I am a Will Novak who lives in Arizona. Vermont seems like a very far way for me to travel for the bachelor party of a guy I’ve never met,’ he replied to the group chain.

‘That being said: f***ng count me in! From the contents of this email, Angelo sounds tremendous and I want to help send him off in style. I hope his bride (or groom) to be, is awesome.’

‘I can bring my sweet Nintendo Switch so we can play games in the cabin/chalet/whatever in the evenings. If Angelo isn’t into video games I’m happy to bring suduko puzzles or just Indian Leg Wrestle or whatever he likes,’ he added.

‘If you can all advise me on the nearest airport to fly into, I’ll make arrangements forthwith. Yours in partying, Will Novak.’

Novak thought the joke would end there but, amused by his enthusiastic reply, Angelo’s friends insisted he attend. 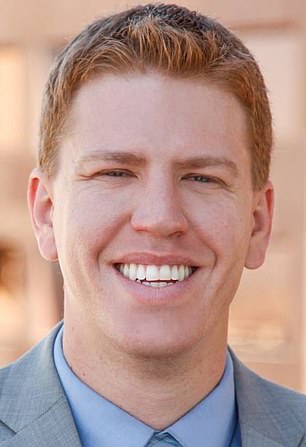 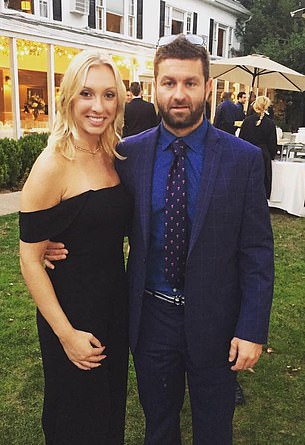 It has been an incredible journey for Novak, who didn’t expect anything to come out of a joke reply he sent off after receiving the invite to Angelo’s bachelor party (pictured right with his fiancee Devon) 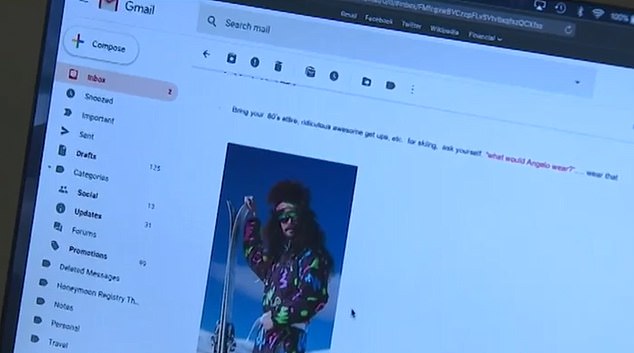 The invitation landed in Novak’s inbox last week. It included pictures of skiers in 1980s gear and told recipients to dress similarly for the event 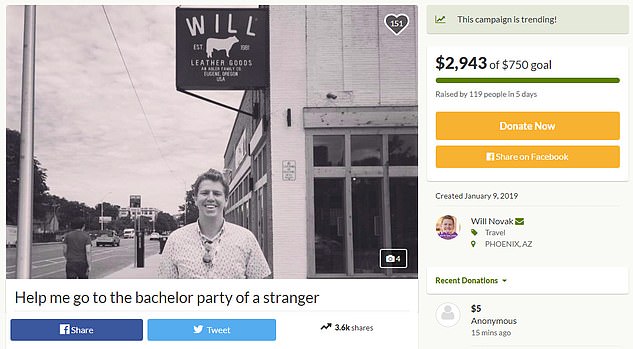 Eager to attend the party after exchanging several emails with Angelo’s friends, Novak launched a GoFundMe page to pay for his air fare and ski lift

When Novak originally looked up the cost of flights, they were around $250. The amount skyrocketed, however, making the trip out of his reach.

Undeterred, he launched a GoFundMe page in the hope of raising his air fare, enough money for a ski pass, and some cash to put towards food and beer.

Novak hoped to raise $750 but surpassed his goal within days, raising more than $3,000.

He has since vowed to give the extra money to Angelo and his bride, who are expecting their first baby. 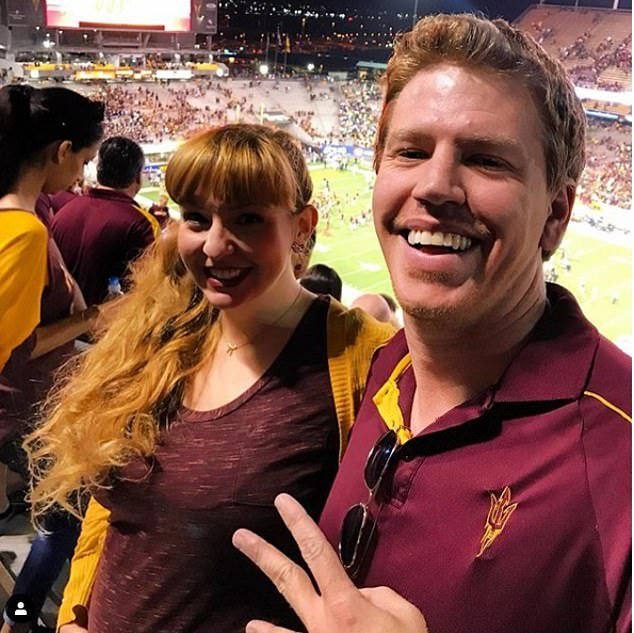 Novak, pictured with his wife, is thrilled to be attending. He has vowed to give the extra money to the groom and his bride-to-be, who are expecting their first baby