A graffiti tagger arrested after allegedly spray painting ‘Penis Man’ dozens of times around a town in Arizona has said there could be more like him around – after revealing he was just a follower who did a few taggings.

Former Arizona State University student Dustin Shomer evaded capture since November 2019 as he scrawled the offensive words around the city of Tempe, Arizona. But he was allegedly caught in the act on Thursday, January 23.

Shomer, who claims he was arrested by 25 heavily armed SWAT officers, has now revealed that he is just one of many ‘Penis Man’ enthusiasts who tag the words onto various buildings and objects. 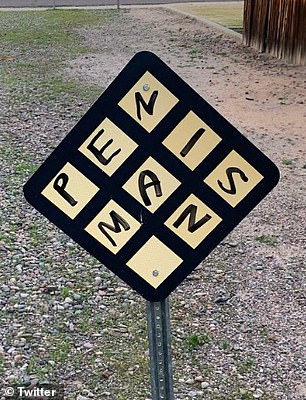 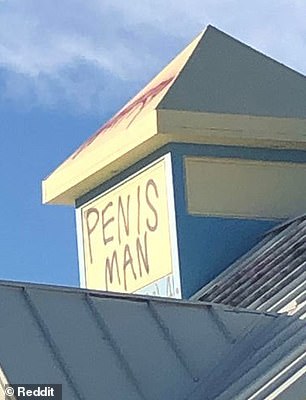 ‘I’m not the original,’ Shomer told the New Phoenix Times on Monday. ‘There are hundreds of copycats with very distinctively different handwriting.’

Revealing how he was inspired to go around tagging the words ‘Penis Man, Shomer said he heard some people in a Tempe bar talking about the ‘real,’ seemingly phantom-like Penis Man and got inspired to do some of his own.

‘I thought it was a good message,’ he explained.

And on Facebook he wrote: ‘Penis Man is neither man nor woman, you nor me. We are ALL Penis Man.’

Shomer, a native of Phoneix, Arizona, was allegedly caught red-handed by the Arizona State University Police Department at approximately 5:30PM. They called in the Tempe police to make the arrest. 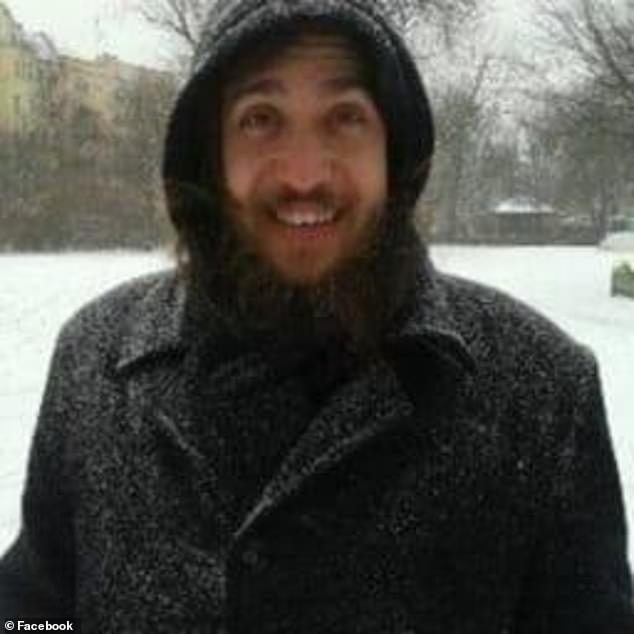 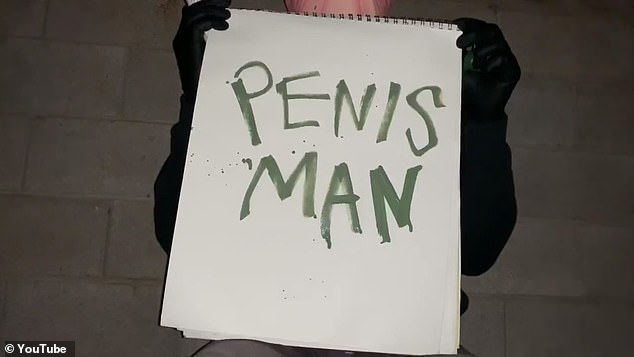 ‘Tempe Police Detectives arrested Dustin Shomer after investigation revealed he was responsible for multiple graffiti incidents of “Penis Man” throughout the City of Tempe and across Arizona State University as well,’ Detective Greg Bacon told the Daily Mail.

According to Shomer’s Facebook page, he is a former student of the Japanese Language and Literature in Arizona State University, which has a campus in Tempe.

Many of the 40-plus tags as ‘Penis Man’ appeared on the college campus.

In one of his social media posts, Shomer reportedly spoke about how ‘Penis Man’ was a protest against ‘corrupt local government’.

‘Penis Man’ had been active since November when an early January ABC15 Arizona news report made him a local celebrity.

A ‘Penis Man Fans’ Twitter page was created to document the new locations where the graffiti appeared and even Presidential campaign badges were created by his fans. 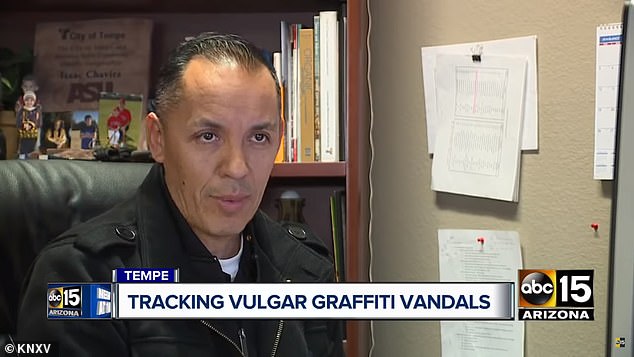 The city’s maintenance managers were initially lenient about the wide spread tags as the few tens of locations were nothing in comparison to the 300,000 cases of graffiti logged in Tempe in 2019. The police had also received no official complaint and so an investigation was not opened.

But the tagging became a problem when local historical landmarks began to be targeted, including the historic Hayden Flour Mill, the ‘A’ landmark on Hayden Butte and the front door of Tempe’s municipal building. 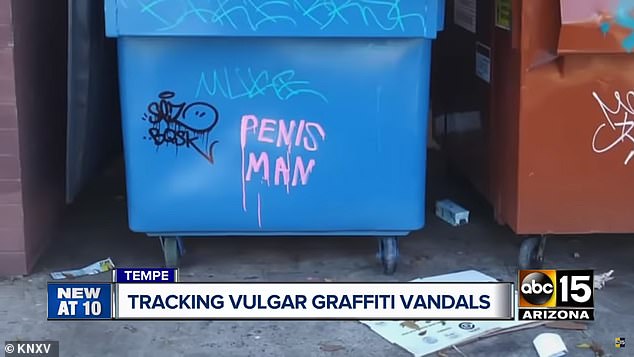 ‘Penis Man’ appeared to be opportunistic in his approach to tagging

‘It’s like, I get that anything longer than it is wide is phallic, but at a certain point, you just shake your head,’ Tempe Vice Mayor Lauren Kuby told New Times.

‘The public works staff has to work extra hours to clean that up.’

‘There’s a lot of time, material and resources that’s being utilized to abate the graffiti so yes, I would like to see this stopped,’ said Isaac Chavira, Tempe’s transportation maintenance manager.

Shomer himself engaged in the hype on social media surrounding ‘Penis Man’. 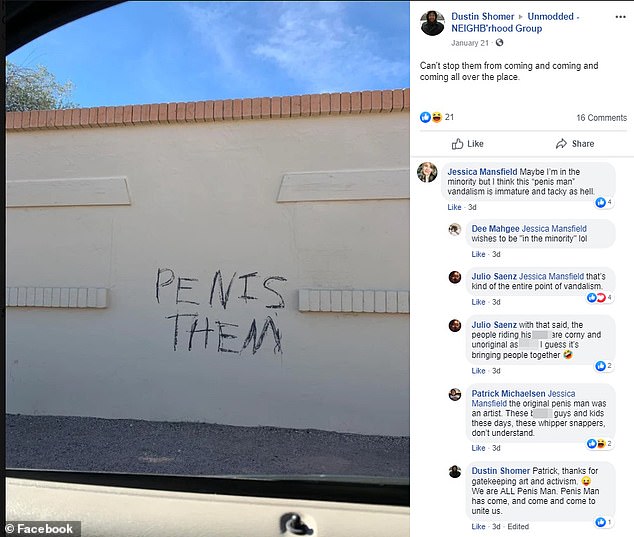 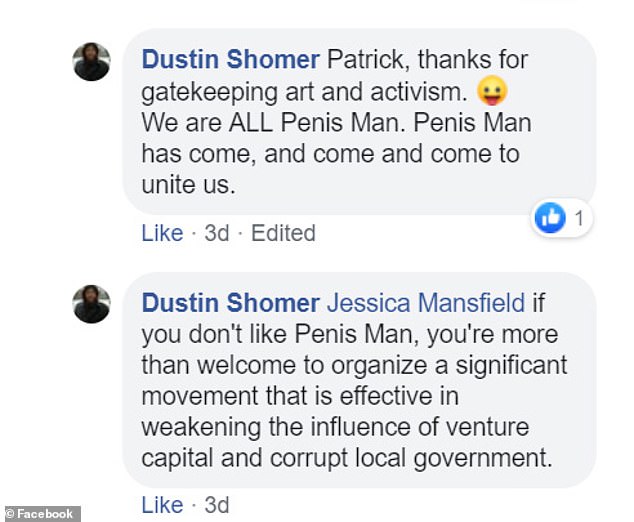 Shomer appeared to claim ‘Penis Man; was a protest against ‘corrupt local government’

Without identifying himself, Shomer revealed more about ‘Penis Man’ through his posts

While not identifying himself, he commented several times in response to other users, telling one: ‘if you don’t like Penis Man, you’re more than welcome to organize a significant movement that is effective in weakening the influence of venture capital and corrupt local government.’

He also commented: ‘LGBTQ+ is a function of capitalist identity politics. Although anyone should be free to be who they are, they should not need a particular label in order to achieve validity in their sexuality or orientation.’