Defeated Republican Martha McSally could make it to the Senate after all with an appointment to the seat that John McCain held prior to his passing.

It’s currently occupied by Jon Kyl, who had served in the Senate before and retired. He has only committed to doing the job until the end of the year, which would provide Arizona Gov. Doug Ducey with a new opportunity to appoint someone, possibly McSally.

‘Martha McSally would be a very good member of the United States Senate, however she got there,’ Kyl told CNN on Tuesday. ‘And I regret that she didn’t make it in her election.’

He said he wouldn’t get involved in the governor’s decision and would share his opinions with him privately on the future of the seat, while offering his support to the Republican representative who had just suffered a bruising defeat.

McSally did not run for reelection to the House this year so that she could pursue the Senate seat that was being vacated by retiring Sen. Jeff Flake. She fell short in an extremely tight race this week to her Democratic challenger, fellow Rep. Krysten Sinema, in the vote count that dragged on for a week.

Kyl has not said whether he will actually be leaving next month, and Ducey’s office has said publicly that it wants him to stay.

McSally would be a top candidate for the appointment, if he leaves, though, having served in the House. The rules state that the person who fills the seat must be a Republican, because McCain was one.

‘I can’t think of anybody more qualified than Martha McSally,’ Kyl on Tuesday told CNN.

He insisted in the interview that he did not ‘want to try to try to influence’ Ducey’s decision and his high praise for military veteran ‘have nothing to do with any potential candidate to replace me.’

‘I’m going to be discussing my plans with the governor, and everybody else will be the second to know,’ he said of his plans to retire again or stay in the seat through the special election that will take place in 2020.

Daniel Ruiz, a senior adviser to the governor, told CNN: ‘The governor is hopeful that Kyl will continue to serve in the appointed Senate seat through 2020.

‘At this point we would not speculate on a vacancy that does not exist,’ Ruiz said.

McSally’s appointment could scare off other Republicans who might be interested in running for the seat in two years. A strong seat-filler could ward off big name Democrats considering campaigns,  as well.

She would be the second female senator to represent Arizona in the Senate, with Sinema, a three-term congresswoman, becoming the first in the election that took place on November 6. 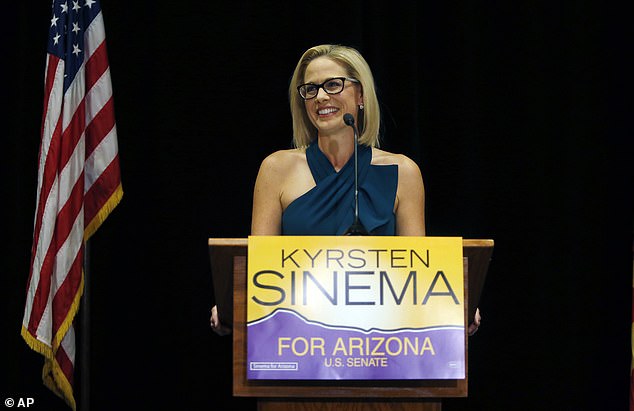 Sinema spoke to reporters at a Scottsdale hotel and declared victory. She is pictured here declaring victory 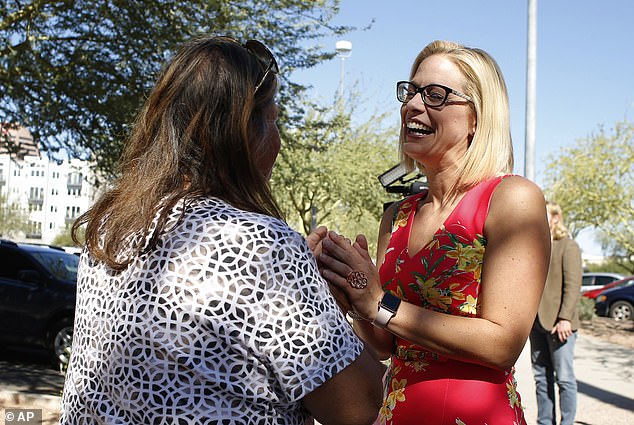 Kyrsten Sinema speaks to a supporter on November 6, 2018, in Phoenix, Arizona 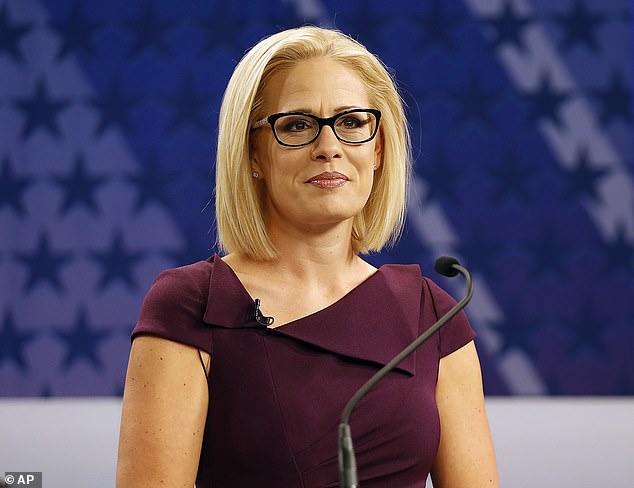 She won a race that was among the most closely watched in the nation, beating McSally in the battle to replace GOP Sen. Jeff Flake

Sinema, who at 42 will be one of the Senate’s youngest members, addressed cheering supporters in Phoenix, where she took a moment on Veterans Day to thank McSally – the country’s first female fighter pilot to fly in combat – for her service to the nation.

Sinema appeared to call out Trump’s scorched earth tactics in her remarks, as she called for healing after the tense midterm elections.

‘Arizona rejected what has become far too common in our country: name-calling, petty personal attacks, and doing and saying whatever it takes just to get elected,’ she said. It’s dangerous, and it lessens who we are as a country. But Arizona proved that there is a better way forward.

Sinema also paid tribute to Arizona native son John McCain, the senator and 2008 Republican presidential nominee who emerged as a key Trump critic and who died of cancer earlier this year.

‘Senator McCain is irreplaceable, but his example will guide our next steps forward,’ she said.

‘He taught us to always assume the best in others, to seek compromise instead of division, and to always put country ahead of party.’

Arizona Congresswoman Martha McSally posted a concession video Monday on Twitter in which she congratulated Sinema.

‘I just called Kyrsten Sinema and congratulated her on becoming Arizona’s first female senator after a hard-fought battle,’ McSally said in the video as she sits next to her dog on a living room couch.

‘I’m so grateful for everyone who voted for me,’ McSally said as she held her dog’s paw.

How Kyrsten Sinema has overcome the odds 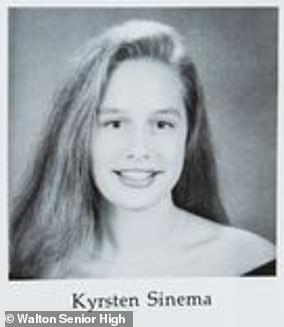 At 14 she began taking college courses, and she finished high school a year early at 16

Sinema was born in 1976 to a father who practiced law and a mother who cared for her children in Tuscon, Arizona.

The family’s fortunes changed and her father lost his job in the 1980s recession. Her parents divorced in 1983.

Her mother remarried and took Sinema and the two other children to Florida, and it was there that she lived in an abandoned gas station from the ages of eight to 11, according to AZCentral.

Sinema has spoken about her mother relying on food stamps when her parents got divorced and when her family was homeless.

Things began looking up for her family in 1987 when her mother and stepfather secured work and they bought a house with the help of a church.

At 14 she began taking college courses, and she finished high school a year early at 16.

In two years she obtained a bachelor’s degree from Brigham Young University, and she also married fellow student, Blake Dain. They later divorced.

In 2005, she made her first public comment about being bisexual, when a Republican’s speech insulted members of the LGBT community.

She said: ‘We’re simply people like everyone else who want and deserve respect.’

When questioned by reporters, she replied: ‘Duh, I’m bisexual.’

Sinema, now 42, now has a master’s degree, law degree and a PhD. She worked as a social worker, a criminal defense attorney, and was a political activist in her 20s, running as an independent Green Party candidate for the Arizona House. 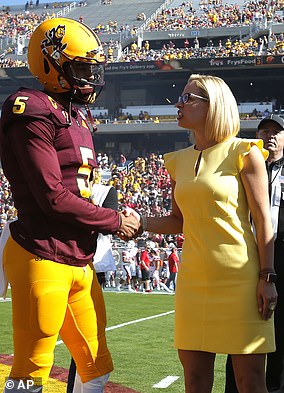 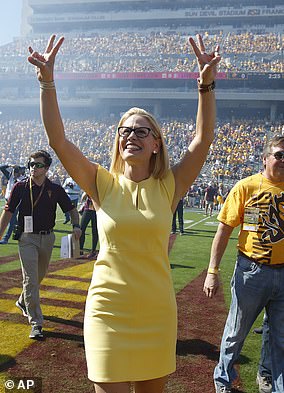 Success story: Kyrsten Sinema is pictured left shaking hands with Arizona State’s Kobe Williams during the coin toss before an NCAA college football game against Utah, Saturday, in Tempe, Ariz. on November 3, and right at the game

She then became a Democrat and served several terms in the state Legislature. Sinema started as an overt liberal but developed a reputation for compromise among her Republican peers, laying the groundwork to tack to the center. She published a book on bipartisanship.

When the 9th Congressional District was created after the 2010 Census, Sinema ran for the Phoenix-area seat as a centrist and won the 2012 election.

After the three-term congresswoman’s win on Monday, she becomes Arizona’s first Democratic U.S. senator since 1994, the country’s first openly bisexual senator, and the first female senator elected to represent Arizona in the Senate.

McSally, the first ever woman to fly combat missions for the United States Air Force, called her supporters her ‘wingmen and women.’

Sinema’s win cemented Arizona as a swing state after years of Republican dominance.

Sinema portrayed herself as a moderate who works across the aisle to get things done.

McSally, a former Air Force pilot who embraced President Donald Trump after opposing him during the 2016 elections, had claimed that Sinema’s anti-war protests 15 years ago disqualified her and said one protest amounted to what she called ‘treason.’

But during her six years in Congress, Sinema built one of most centrist records in the Democratic caucus, and she voted for bills backed by Trump more than 60 per cent of the time. 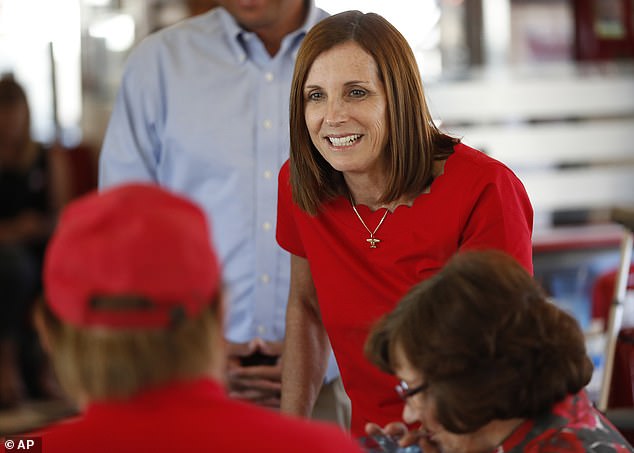 McSally was the first ever woman to fly combat missions for the United States Air Force. She is pictured here speaking with voters on November 6 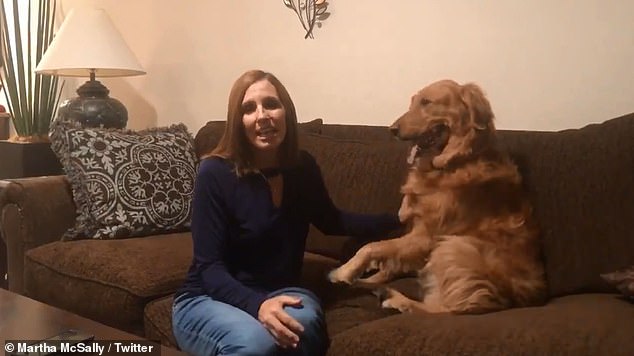 Arizona Congresswoman Martha McSally posted a concession video Monday on Twitter in which she congratulated her Democratic opponent, Kyrsten Sinema, for winning the U.S. Senate seat in a tightly contested race

She backed legislation increasing penalties against people in the country illegally who commit crimes.

McSally’s attacks on Sinema reached back more than 15 years, when Sinema was a Green Party spokeswoman and liberal activist.

McSally also campaigned on her military record and support for the Armed Forces.

McSally argued that she would protect patients, despite her vote on the bill that would have removed many of those protections.

The contest drew more than $90million in spending, including more than $58million by outside groups, according to Federal Election Commission reports.

Attack ads by both sides clogged the airwaves for months.

Sinema, 42, has a law degree, worked as a social worker and was a political activist in her 20s, running as an independent Green Party candidate for the Arizona House.

She then became a Democrat and served several terms in the state Legislature.

Sinema started as an overt liberal but developed a reputation for compromise among her Republican peers, laying the groundwork to tack to the center. 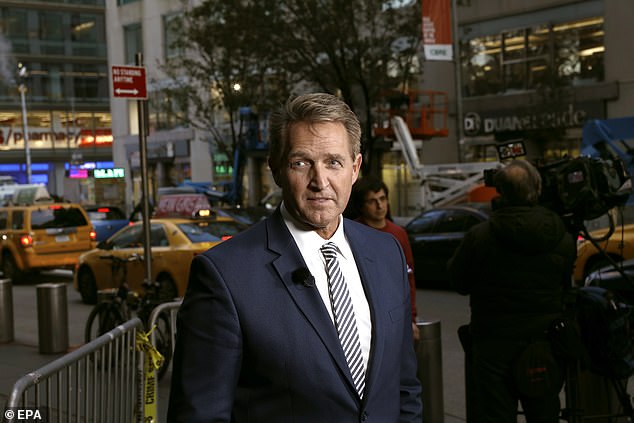 Flake was an outspoken critic of Trump and announced in 2017 that he would not seek re-election, acknowledging he could not win a GOP primary in the current political climate

When the 9th Congressional District was created after the 2010 Census, Sinema ran for the Phoenix-area seat as a centrist and won the 2012 election.

McSally, 52, was the first female Air Force pilot to fly in combat, flying A-10 attack jets.

She also was the first woman to command a fighter squadron, again in A-10s.

McSally lost her first race in Arizona’s 2nd congressional district in 2012, when she was narrowly defeated by Democratic Rep. Ron Barber, who replaced Rep. Gabby Giffords after she was wounded in a 2011 assassination attempt.

But McSally came back to win the 2014 election, beating Barber by a narrow margin.

Flake was an outspoken critic of Trump and announced in 2017 that he would not seek re-election, acknowledging he could not win a GOP primary in the current political climate.

His support of the president’s initiatives, however, was mixed.