Woman, 19, is busted for driving in a high-occupancy lane with a BABY DOLL in the passenger seat – just days after another driver used a mannequin in a blanket to try and outsmart cops

Two women in Arizona were busted this month driving with dolls in their vehicles so they could use high-occupancy vehicle lanes in two separate incidents that took place within days of one another.

The Arizona Department of Public Safety took to Twitter on Wednesday, reporting that a motorcycle trooper pulled over a driver for an HOV lane violation on the eastbound side of Loop 202 near San Tan exit shortly before 6pm on September 11.

Inside, the trooper discovered a doll made to resemble a cherubic infant carefully strapped into the car seat.

Nice try: A 48-year-old grandmother from Arizona was stopped on September 11 for driving with this baby doll in an HOV lane

A photo that accompanied the tweet showed the bogus baby dressed in a pink polka dot footie and a matching beanie hat.

According to the agency, the driver, identified only as a 48-year-old woman from Chandler, told the trooper she was on her way to pick up her grandchild.

Just four days prior to that traffic stop, a trooper pulled over another driver on the Loop 202 near Van Buren exit for traveling with a mannequin in the passenger seat.

A photo taken at the scene and subsequently shared on Twitter showed the dummy made to look like a woman wrapped in a blanket, wearing a brown wig and a pair of sunglasses.

The 19-year-old motorist was issued a citation carrying a minimum fine of $400, reported ABC15. 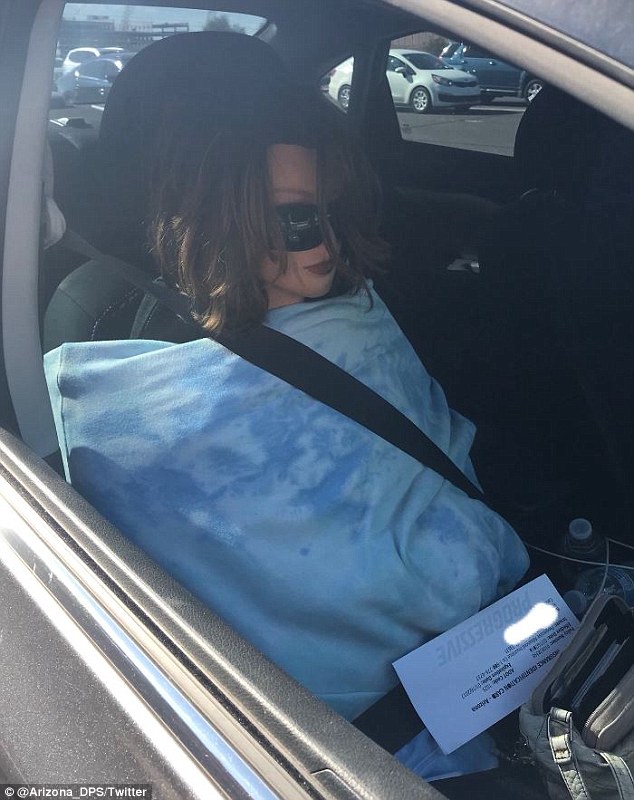 What a dummy: On September 7, a 19-year-old Arizona woman was caught misusing an HOV lane by driving alone in her car with this mannequin for a passenger

According to the DPS, Arizona troopers cite over 4,000 drivers each year for HOV lane violations.

The law defines a high occupancy (HOV) lane as a restricted traffic lane reserved at peak travel times or longer for the exclusive use of vehicles with a driver and one or more passengers.