At kick-off in Munich on Tuesday night, Bayern Munich were in crisis. Nine points off the top of the Bundesliga, without a win in three games, the German champions were in disarray. Coach Niko Kovac, it was said, had one game to save his job.

Half an hour later, Arjen Robben had twice cut inside from the right wing to smash the ball into the top corner with his left foot, and everything felt normal again. 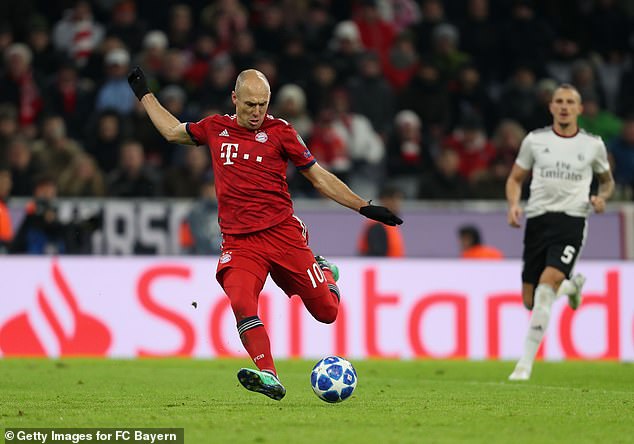 ‘When great players and great teams get knocked down, they get up again,’ Robben told Sky after the game in his deadpan Dutch drawl. Whether this Bayern side are a great team is up for debate, but Robben is undoubtedly a great player.

The Dutchman, who has looked like a 34-year-old since his early twenties, plays like a twenty-something at the age of 34. All the hallmarks of his younger self are still there: the Cruyff-like totter and change of pace, the bobbing and weaving on the edge of the box and, of course, the predictable, unstoppable cut-inside-and-shoot gag.

On Tuesday, he put them to best use when Bayern needed them most, inspiring his side to a much-needed win after what had been a torrid few weeks.

The 3-3 draw at home to lowly Fortuna Duesseldorf last Saturday, in which Bayern surrendered a two-goal lead in the last 15 minutes, had turned an already strained atmosphere truly sour in Munich. Many fans had begun to call for Kovac’s head, while president Uli Hoeness had offered a lacerating appraisal of his players’ performances, calling them ‘outrageous’ and ‘unacceptable’.

To all the world, it appeared that Kovac was about to suffer the same fate as Carlo Ancelotti had a year earlier. Ousted by the senior figures in the dressing room, the likes of Robben, Thomas Mueller, Franck Ribery and Robert Lewandowski.

Yet the reaction of exactly those players last night appeared to prove the opposite. Ribery, Robben and Lewandowski shared the goals between them, and the Dutchman reserved a special word for his coach after the game.

‘Today was a win for the team, for the coach, for the fans,’ he said. ‘You lose together and win together. It’s a cliche, but it’s true. I have to say, though, I am most happy for Niko Kovac. He really deserved that today.’

Those words will have been music to the ears of Kovac, who has the unenviable task of overseeing a generational transition at Bayern. While a handful of his senior players had allegedly voiced criticism of the coach in internal meetings earlier in the week, Robben was now coming out in heartfelt public support.

Kovac knows he is not out of the woods yet, and made a wry comment about football ‘always being black and white’ in his post-match press conference. Yet he also knows that, if he is to succeed, he needs the backing and help of his senior stars as he brings the younger players through.

Robben delivered that support in abundance on Tuesday, both on the pitch and off it. He proved once again why, despite his ageing limbs, he remains an invaluable force for Bayern.

His current contract is set to expire in the summer, and there is good reason to believe that the Flying Dutchman will finally make port at the end of the season. However eternal a figure he seems to be, Robben is certainly on his way out.

Yet on Tuesday, he showed that he still has it when it matters. He showed that he might just be able to pull Bayern out of one more crisis. To pick them off the floor one more time, and lead them through this turbulent season.

After all, so long as Arjen Robben is there, there is always the hope that he can simply cut inside, shoot, and bury Bayern’s troubles in the top corner.