Arkansas dog gets jealous when owner dances with a friend

A dog in North Little Rock, Arkansas, gets protective of his mother when she dances with a friend and asks to cut in.

‘We adopted our friend’s dog, because she was unable to keep him, and I was already in love with him,’ the owner said in a ViralHog video caption. ‘We soon learned that he is very protective of me.

‘It’s not that he wants to dance, he just doesn’t want others to even be near me or touch me at all. He is definitely a momma’s boy,’ she said.

A hilarious video shows the massive dog circling and barking at the dancers. 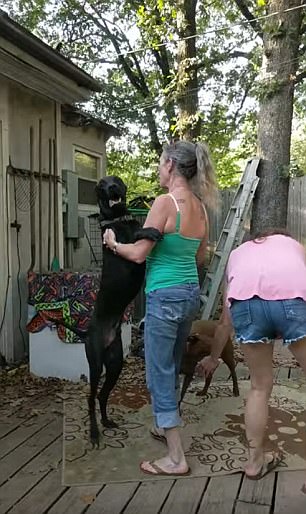 A hilarious video shows a large dog getting jealous when his owner dances with a friend. To appease him, the owner invites the dog to be her dance partner

The owner pats her hands on her chest to invite the dog to jump up and dance with her. He is so large that he easily reaches up to her shoulders.

The dog can’t stand on his hind legs for too long so he asks to be put on all-fours again.

As soon as the owner and her friend start dancing again, the dog gets jealous and demands to be her partner again.

The video was taken on August 25 and posted to ViralHog on September 5. It currently has more than 1,600 views. 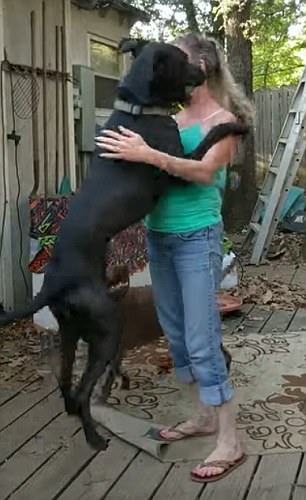 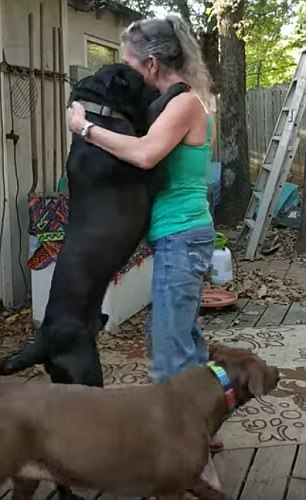 The dog leaps with excitement at the chance to dance with its mom. Another dog circles the duo asking for a fair share of the attention