Arkansas Senator Tom Cotton sparked outrage by calling the enslavement of millions of African people in the early years of the United States a ‘necessary evil’.

Cotton, an outspoken Republican, made the jarring remark in an interview with the Arkansas Democrat-Gazette on Sunday as he promoted a new bill that would defund schools that teach the New York Times’ controversial 1619 Project about slavery in the US.

The senator argued that slavery is a critical piece of American history, saying: ‘As the founding fathers said, it was the necessary evil upon which the union was built, but the union was built in a way, as Lincoln said, to put slavery on the course to its ultimate extinction.’

Cotton later defended his comment by insisting that he was merely citing the founding fathers in a tweet reposted by President Donald Trump, and his office stated that the senator does not personally believe slavery was a ‘necessary evil’.

Cotton last week introduced his bill, the Saving American History Act, which aims to ‘prohibit the use of federal funds to teach the 1619 Project by K-12 schools or school districts’.

The 1619 Project was launched by the Times in 2019 to mark the 400th anniversary of African slaves’ arrival in what later became the US.

The venture examines how slavery shaped and continues to permeate all aspects of American society by expanding on early accounts that are largely left out of the historical narrative taught in most schools.

The Times subsequently teamed up with the nonprofit Pulitzer Center to create a curriculum based on the project for primary and secondary schools.

In his interview with the Democrat-Gazette, Cotton argued: ‘The entire premise of the New York Times’ factually, historically flawed 1619 Project … is that America is at root, a systemically racist country to the core and irredeemable.

‘I reject that root and branch. America is a great and noble country founded on the proposition that all mankind is created equal. We have always struggled to live up to that promise, but no country has ever done more to achieve it.

‘We have to study the history of slavery and its role and impact on the development of our country because otherwise we can’t understand our country.’

Cotton’s bill does not have any co-sponsors and is not expected to pass in Congress, despite widespread GOP opposition to the 1619 Project and the curriculum created out of it. 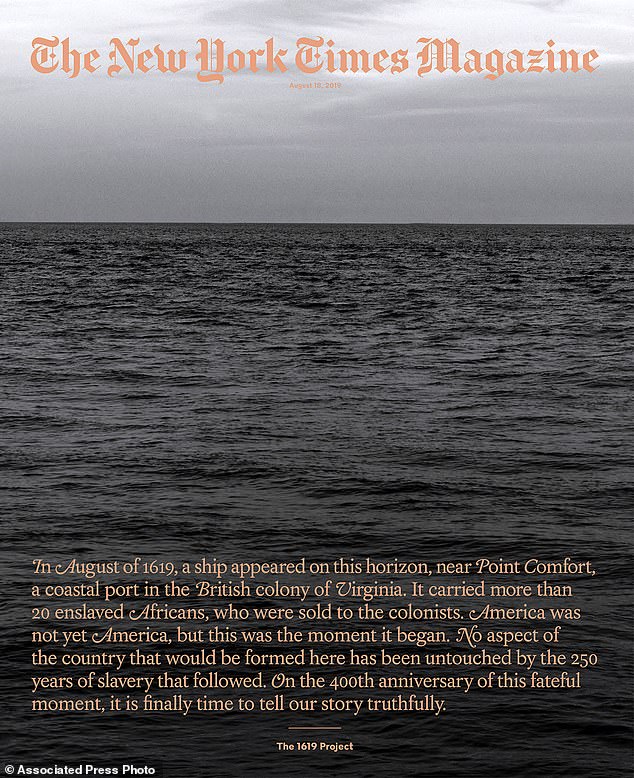 The 1619 Project was launched by the New York Times in 2019 to mark the 400th anniversary of African slaves’ arrival in what later became the US. The venture examines how slavery shaped and continues to permeate all aspects of American society by expanding on early accounts that are largely left out of the historical narrative taught in most schools

Nikole Hannah-Jones, the project’s creator who won a Pulitzer Prize for her introductory essay to the inaugural issue, reacted to Cotton’s bill on Friday and said it ‘speaks to the power of journalism more than anything I’ve ever done in my career’.

Hannah-Jones spoke out again on Sunday after Cotton’s interview came out, tweeting: ‘If chattel slavery – heritable, generational, permanent, race-based slavery where it was legal to rape, torture, and sell human beings for profit – were a “necessary evil” as Tom Cotton says, it’s hard to imagine what cannot be justified if it is a means to an end.’

She continued: ‘Imagine thinking a non-divisive curriculum is one that tells black children the buying and selling of their ancestors, the rape, torture, and forced labor of their ancestors for PROFIT, was just a “necessary evil” for the creation of the “noblest” country the world has ever seen.

‘So, was slavery foundational to the Union on which it was built, or nah? You heard it from Tom Cotton himself.’

Cotton hit back at Hannah-Jones in his own tweet, writing: ‘More lies from the debunked 1619 Project.

‘Describing the views of the Founders and how they put the evil institution on a path to extinction, a point frequently made by Lincoln, is not endorsing or justifying slavery. No surprise that the 1619 Project can’t get facts right.’

Cotton also attacked media reports about his ‘necessary evil’ comment, tweeting: ‘This is the definition of fake news.

‘I said that *the Founders viewed slavery as a necessary evil* and described how they put the evil institution on the path to extinction, a point frequently made by Lincoln.’

A spokesman for Cotton’s office similarly told Talking Points Memo: ‘As [Cotton’s] quote makes clear, that view was held by some founding fathers. Reporting to the contrary is politically motivated and dishonest.’

It’s unclear when the founding fathers expressed such views, or if they did at all. 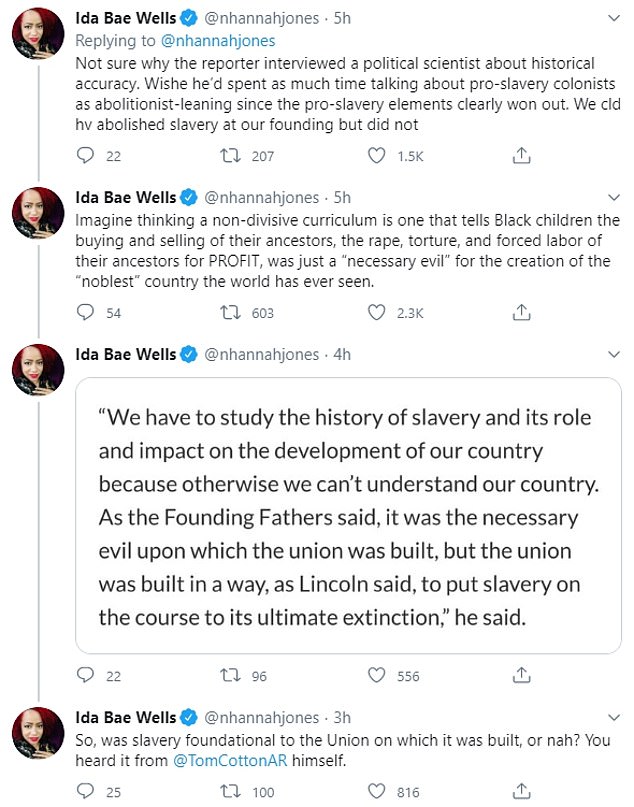 Nikole Hannah-Jones, the creator of the 1619 Project, slammed Cotton’s ‘necessary evil’ remark in a Twitter thread on Sunday (pictured)

Cotton hit back at Hannah-Jones in his own tweet (pictured), again insisting that he was quoting the Founding Fathers

Cotton is widely considered a possible contender for president in 2024 and is currently running unopposed for re-election this fall, after having won his seat by a wide margin in 2014.

Like many right-wing figures including Trump, Cotton has frequently criticized the Times for what he perceives to be biased and incorrect reporting.

The senator clashed with the newspaper earlier this summer after it published – and later apologized for – an op-ed he wrote calling to deploy the military to break up protests against racism and police brutality.

Cotton’s column, entitled ‘Send in the troops’, sparked outage both outside and within the ranks of the Times, whose journalists branded it ‘fascist’ and said that it lacked adequate fact checking to the point that it contradicted reporting from the paper’s own writers.

Times publisher AG Sulzberger initially defended the decision to publish the op-ed, saying the paper was committed to representing ‘views from across the spectrum’.

But the Times later issued a statement acknowledging that the piece fell short of its editorial standards, prompting the resignation of editorial page director James Bennet.