Arlene Foster has said she would support Boris Johnson if he become Tory leader as amid continued rumours he is hoping to oust Theresa May.

Mrs Foster, leader of the powerful DUP party which is propping the Tories up in Number Ten, also praised his upbeat attitude towards Brexit.

And in a swipe at the Government, she said ministers are failing to ‘talk about the aspirations for the nation’.

Her comments are a major boost for the ex Foreign Secretary – whose incendiary attacks on the PM’s Chequers Brexit plan has cast a long shadow over this week’s party conference.

And all eyes will be on Mr Johnson today as he finally arrives in Birmingham to give his hotly anticipated speech on the fringes of the conference.

He will blast the Government for suggesting they will rise taxes and accuse it of abandoning ‘Conservative values’ in a scathing attack.

His speech – which is the hottest ticket at the Birmingham conference today – will be seen as a thinly veiled leadership pitch. 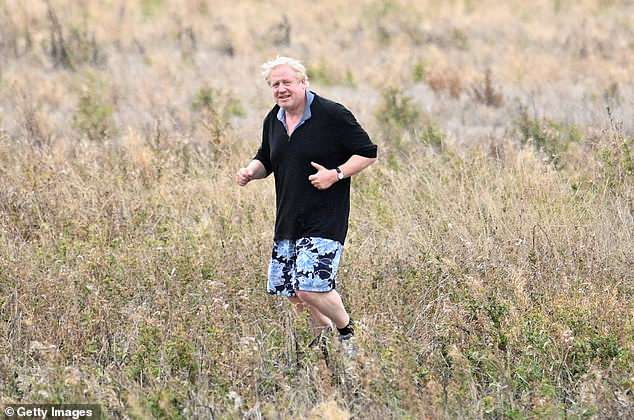 Her comments are a major boost for the ex Foreign Secretary (pictured, out today jogging today in Oxfordshire)- whose incendiary attacks on the PM’s Chequers Brexit plan has cast a long shadow over this week’s party conference 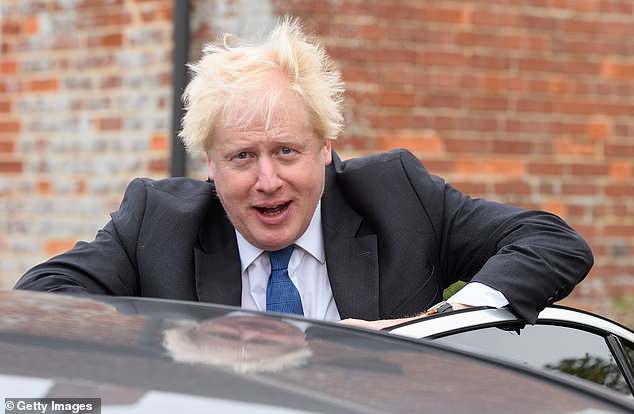 Mrs Foster told The Daily Telegraph that Mr Johnson’ own ‘belief’ in Brexit and being upbeat about Britain’s looming withdrawal.

Theresa May tried to shrug off Boris Johnson’s plot to humiliate her today as he prepares to burst on to the scene at Tory conference in Birmingham.

The former foreign secretary is due to make a splash when he appears at the gathering later after days of sniping from the sidelines.

A clearly tetchy PM was repeatedly grilled over her rival’s manoeuvring during a round of interviews this morning – but tried to ignore the questions by talking about her other priorities.

With a grim smile, Mrs May said she expected Mr Johnson’s speech to a fringe meeting to be a ‘lively event’.

But she insisted she was focused on improving opportunities for young people and delivering her Brexit deal.

Downing Street made a bold bid to distract from the circus around Mr Johnson today by unveiling the government’s post-Brexit immigration policies, insisting EU nationals will in future be treated the same as people from all around the world.

Asked how she had been getting on with Mr Johnson recently, she laughed and told BBC1’s Breakfast: ‘Well, I’m sure that’s going to be a very lively event this evening.

Asked about Mr Johnson’s description of her blueprint for the future relationship with the EU as ‘deranged’, Mrs May said: ‘The Chequers plan is the one plan that delivers on the vote of the British people.’

Asked if she agreed with Mr Johnson, Mrs Foster said: ‘In terms of the need for aspiration I think it is important that people start to talk.

‘I do get very frustrated about some people in the Conservative Party.

‘Look, it’s happening, so therefore let’s make it as good as we possibly can, instead of all of this talk about a people’s vote.

‘I think people want that hope, they want to be positive. I think the reason why so many people are turned off by Brexit is because they are being fed a diet of negativity – whether it’s infighting, Brussels, being disrespected by people over there.

‘We haven’t been able to talk about the aspirations for the nation, we’ve spent so much time arguing about what’s happened, is it going to be a disaster for Ireland in inverted commas, instead of actually focusing on what we can achieve in the UK with the Brexit negotiations.

‘What we want to see, and I’m not making a comparison between Boris and the Prime Minister, is belief. We want to see that spirit.’

Several leading Tories have closed ranks against Mr Johnson and poured scorn against hi chances of ever bin Tory leader.

Philip Hammond told The Daily Mail he did not ‘expect’ Mr Johnson ever to be leader, mocked the way he speaks and accused him of having no grasp of detail.

Scottish Tory leader Ruth Davidson took a thinly veiled swipe at him in her conference speech by criticising ‘ivory-towered schemes of the ideo-logical puritan’.

But Mrs Foster said that her party would work with Mr Johnson if he replaced the PM – pointing out that the DUP’s confidence and supply deal to keep the Tories in power is with the Conservative Party – not any specific leader.

She said: ‘Our confidence arrangement is with the Conservative Party. It was signed by the two chief whips. It is a party-to-party agreement.

‘Whoever leads the Conservative Party we will work with, as it’s in the national interest. The reason we signed the agreement was to ensure Brexit.’ 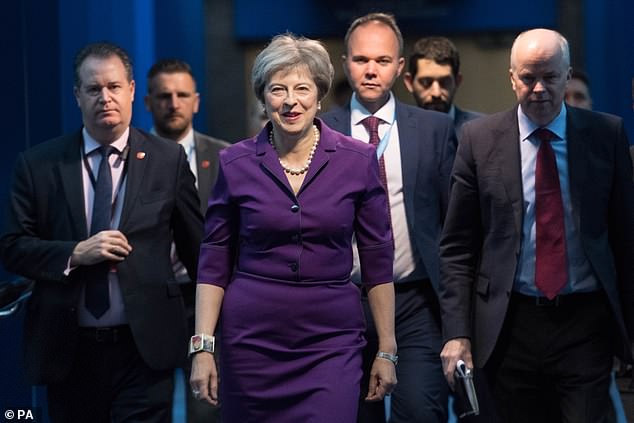 The DUP had rejected the Mr Johnson’s plan for a Canada-style free trade deal in its current form – warning it its ‘vague and contradictory’.

But Mrs Foster was warmer about his plan – saying simply she would have to ‘see what that means for Northern Ireland in reality.’

And she also lashed politicians in Brussels who have said that the Belfast Agreement – which helped bring an end to The Troubles – cannot be touched.

She said: ‘It has been deeply frustrating to hear people who voted Remain and in Europe talk about Northern Ireland as though we can’t touch the Belfast Agreement. Things evolve, even in the EU context.’