The teenage gunman who opened fire in an Arlington, Texas, school on Wednesday has been released on bond, a day after pulling a gun from his backpack and shooting a ‘bully’, a teacher and one other girl.

Timothy George Simpkins was being held on a $75,000 bond on three charges of aggravated assault with a deadly weapon but the 18-year-old walked out of Tarrant County Jail on Thursday afternoon.

A bondsman met the bail terms on Thursday, posting at least some of the full amount, and he walked free.

Simpkins said nothing as he strode out of the jail in a blue t-shirt, matching baseball cap worn backwards, and jeans.

It’s unclear why he has been charged with aggravated assault and not attempted murder or more serious charges, or why the judge granted him bail.

Simpkins – who is 5ft 9in and weighs 135lbs – opened fire in his classroom at Timberview High School on Wednesday morning, shortly after 9am, after a fight with a 15-year-old boy who has not been named.

A video of their fight was posted on social media by Simpkins’ cousin on Wednesday night in an effort to prove that he was being bullied.

It shows Simpkins  – who was identified by police as wearing a light colored hoodie in the footage – being pummeled by the other boy, who is three years his junior, while holding his hands around his head.

Once the fight was over, he went to his orange backpack, pulled out of his gun and started shooting.

He shot the other boy ‘seven to eight times’, according to one student who was interviewed by police, and also shot 25-year-old Calvin Pettitt, a teacher who had tried to break up the fight. Pettitt was shot in the back.

Timothy George Simpkins walked out of Tarrant County Correctional Center on Thursday afternoon after a bondsman paid some of his $75,000 bond. The 18-year-old opened fire in his classroom on Wednesday after a fight with another classmate. He also shot a 25-year-old English teacher who had tried to break up the fight, and grazed a teenage girl 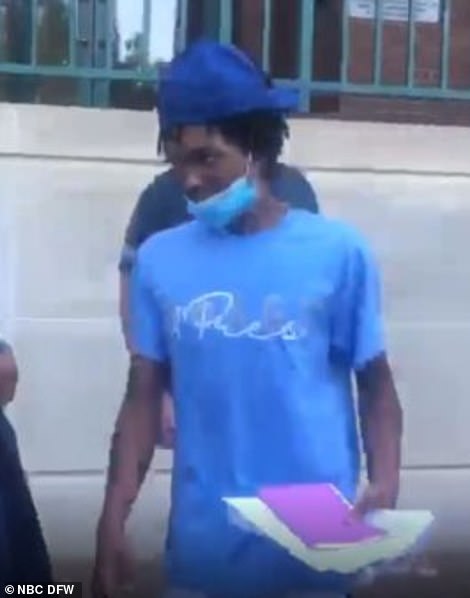 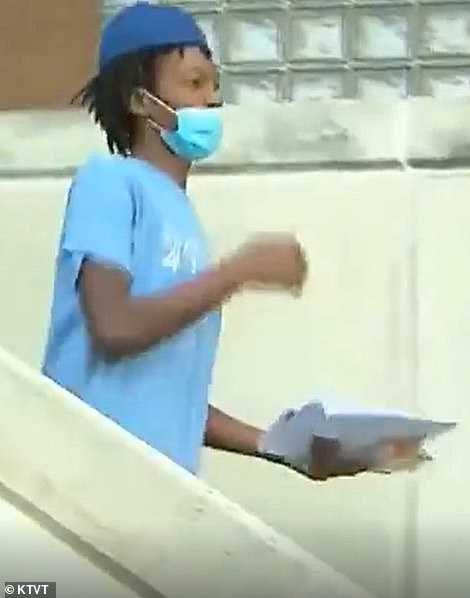 Simpkins has hired his own attorney. It’s unclear when he is next due in court. He has been charged with three counts of assault with a deadly weapon 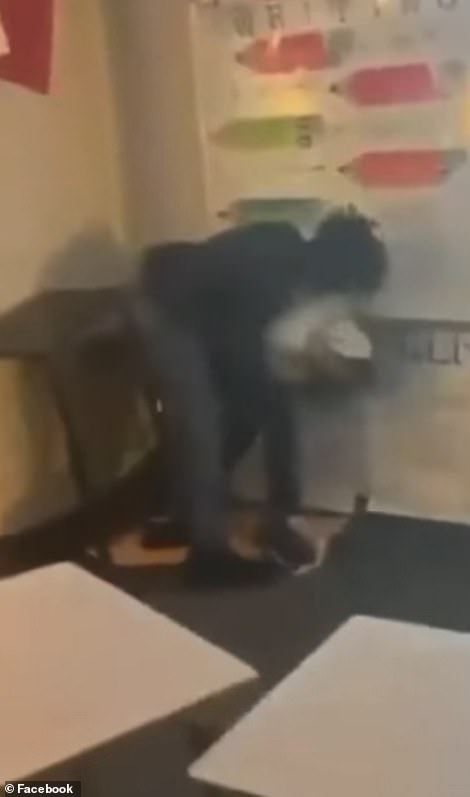 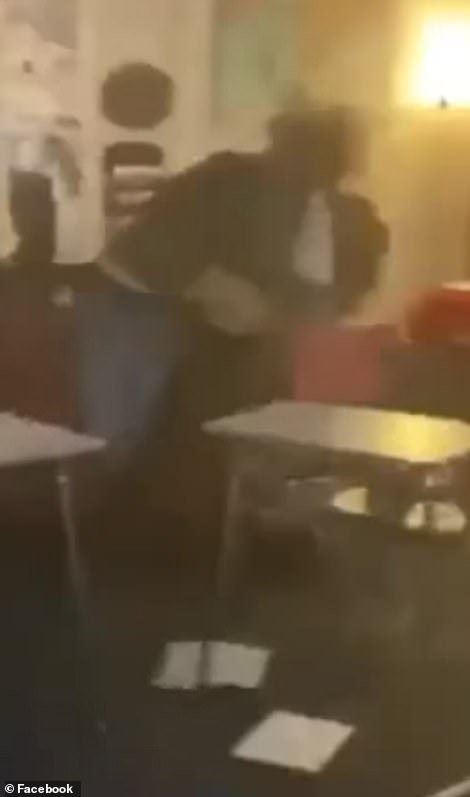 This video, taken moments before the shooting, shows Timothy Simpkins, the shooter, being beaten up in his classroom by a 15-year-old student. After teachers broke up the fight, Timothy went to his backpack and retrieved his gun. He shot the other boy ‘seven to eight times’, according to the police report. He also shot a teacher in the back and grazed a teenager girl with another bullet before going on the run 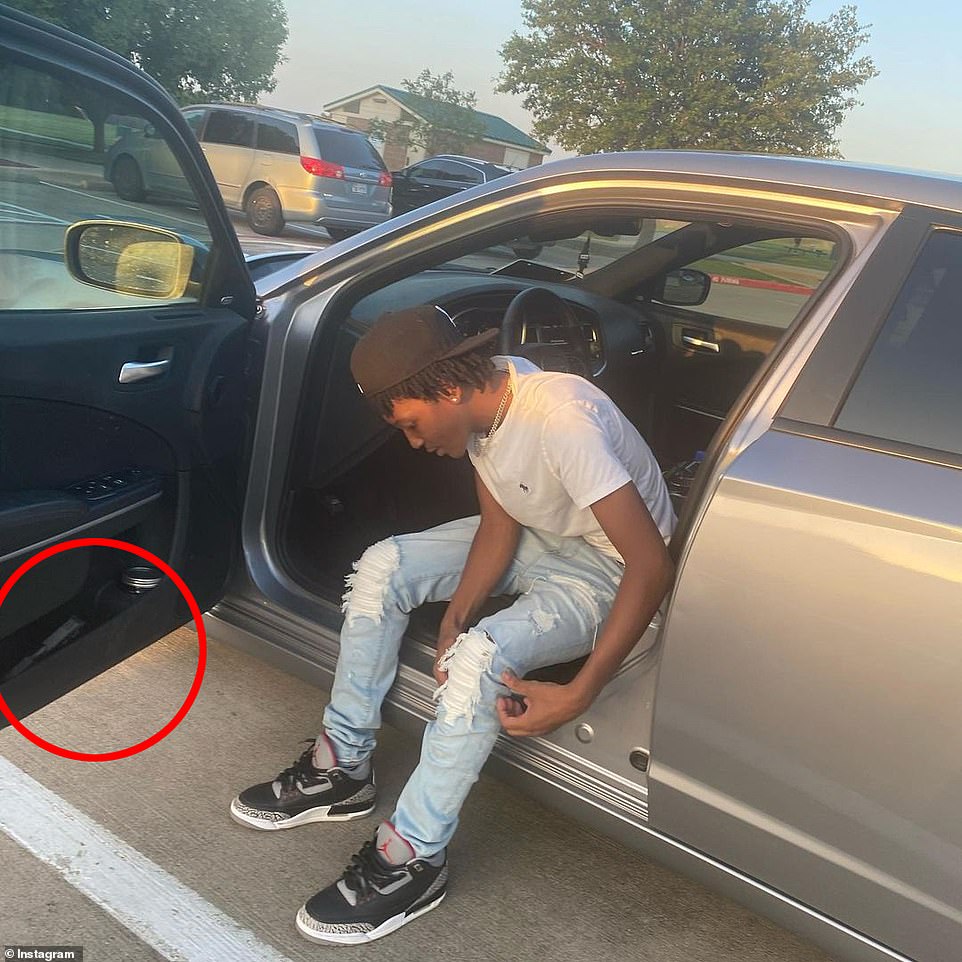 Timothy Simpkins, 18, is shown in his Dodge Charger in a recent social media post. In the side of the car, what looks like a gun is visible. The teenager opened fire in school on Wednesday, shooting at least two people. No one died but some are in a critical condition. His family say he was being bullied in school and he lashed out in self-defense. The school is yet to confirm if they received any reports of the bullying 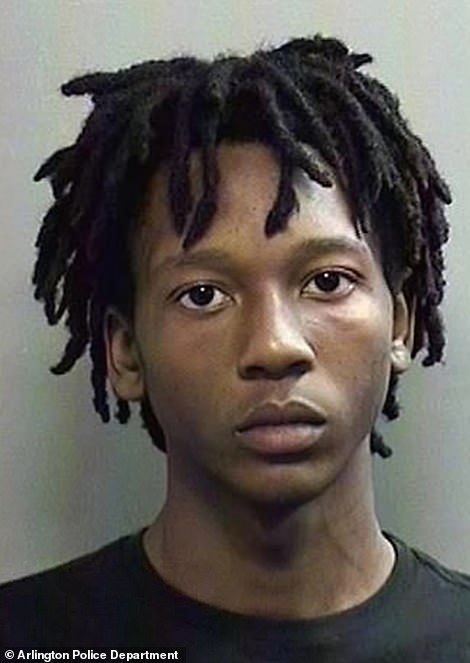 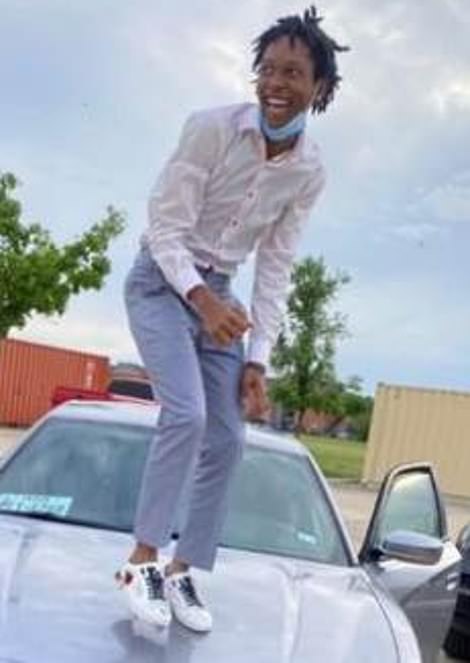 Timothy George Simpkins, 18, has been charged with three counts of aggravated assault for firing a .45 caliber gun during a fistfight at school on Wednesday morning, before fleeing in his Dodge Charger. He is pictured in his booking photo taken on Wednesday (left) and in photos with his car (right)

Simpkins’ arrest affidavit reveals how he pulled the gun from his backack after teachers, including Pettitt, broke up the fight 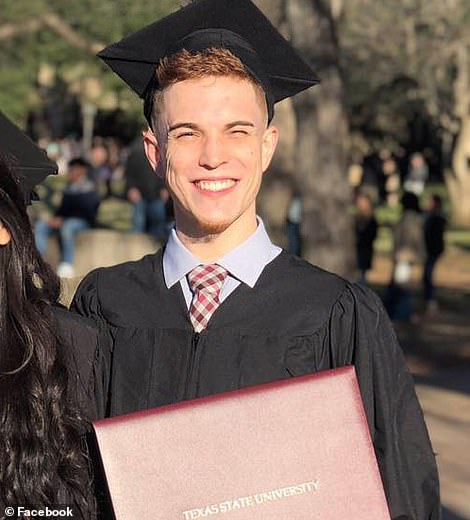 Calvin Pettitt, a 25-year-old English teacher at Timberview High School, was shot in the back. He was one of the teachers who tried to break up the fight, according to the police report

A third victim – a teenage girl – suffered a graze wound but is no longer in the hospital. A fourth person, believed to be a pregnant teacher, was injured when she tripped over in the chaos.

Simpkins was arraigned on Thursday morning via video link. He told the judge he understood the charges and that he would retain his own attorney.

Now, he is in the Tarrant County Correctional Center awaiting his next court date.

‘Multiple teachers and coaches were working to break up the altercation between Simpkins and the juvenile victim.

‘Once the fight was broken up, the juvenile witness observed Simpkins go to an orange backpack and retrieve a black firearm.

‘The witness observed Simpkins point the firearm at the juvenile victim and sees Simpkins shoot, from her account, seven to eight times.

‘The witness then observed the juvenile victim fall to the ground,’ the police report, which DailyMail.com obtained a copy of on Thursday, read.

It also reveals that Pettitt was one of the teachers who tried to break up the fight.

Simpkins’ family spoke out to defend him on Wednesday night, claiming he is a ‘loveable’ boy who snapped after being ‘bullied’. 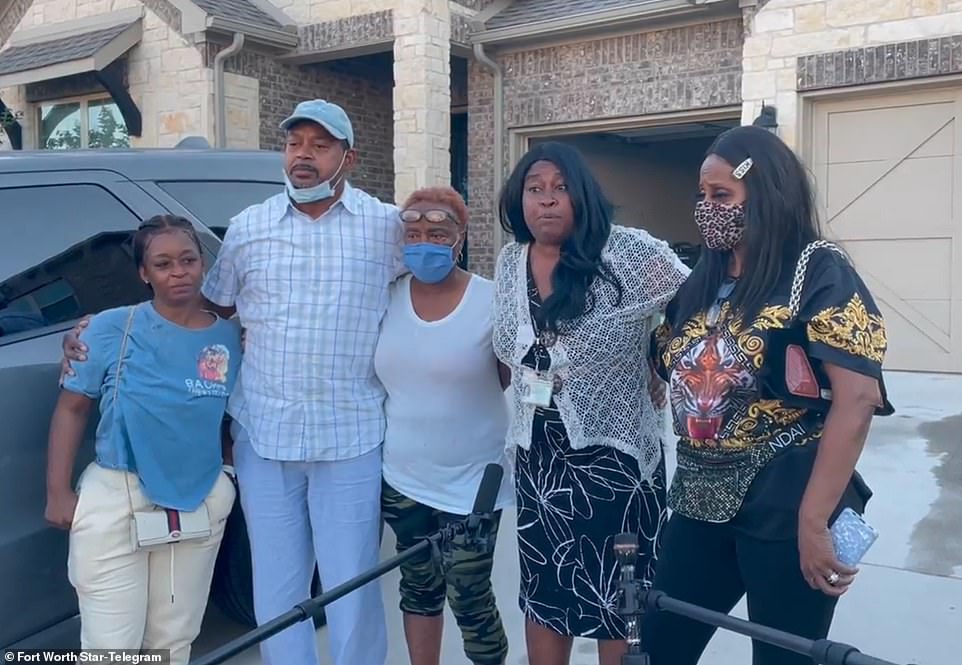 Simpkins’ family. He lives with his grandmother Lillie (center) in a $400,000 home. Carol Harrison Lafayette (second from right, speaking) is a relative and family spokesperson. She told reporters outside the family home that Simpkins was being relentlessly bullied and that while they were ‘sorry’ for the people he hurt, they are grateful he didn’t kill himself after being picked on by bullies 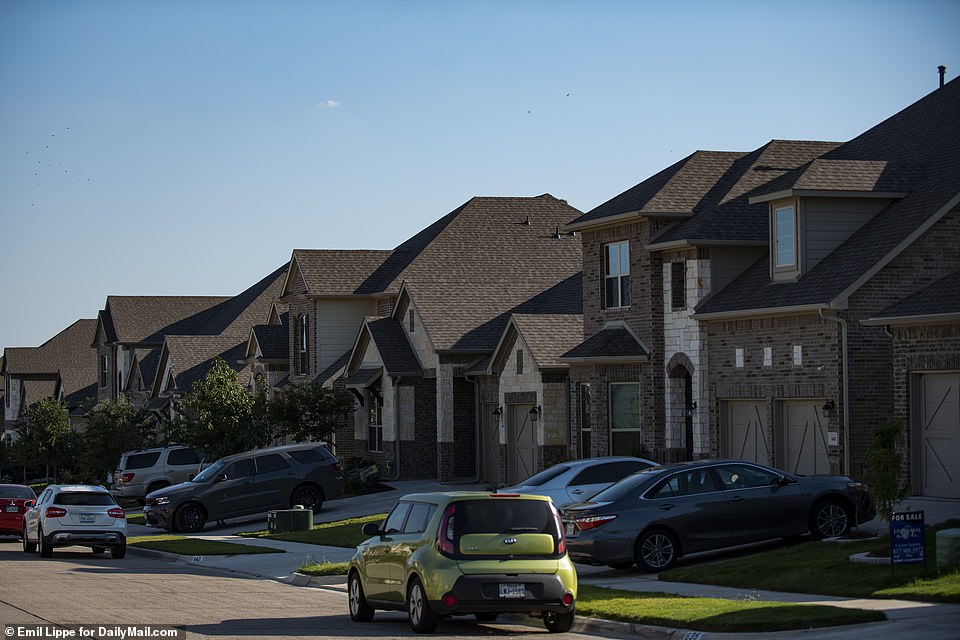 Simpkins lives with his grandmother in a $400,000 house in this street. His family claimed he was targeted because he has nice things 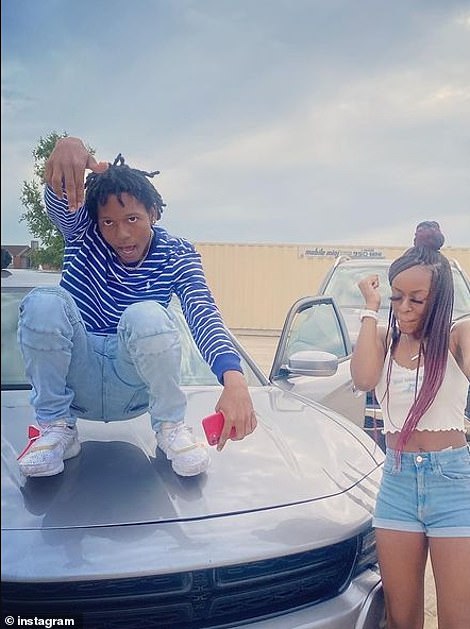 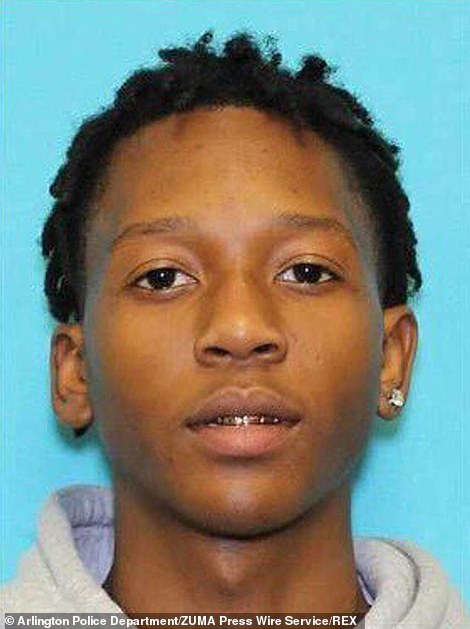 The teenager is shown, left, on his car and right, in a photo released by police on Wednesday after he went on the run. His family have not explained where the ‘expensive’ things they say he was bullied over came from. It’s unclear who bought him his car or if he has a job

They say the other kids picked on him because he has a ‘nice car’ – a $35,000 Dodge Challenger – and wears nice clothes, like a pair of $160 Off-White x Nike sneakers he is pictured in on social media.

Other social media posts show him sitting in the car, with what looks like a black gun in the side door. Police confirmed in his arrest warrant that the gun used in the shooting was black, but they have not given any further details.

It’s also unclear who it belongs to, when it was purchased and why he was able to get it into the school.

The school does not use metal detectors, like other high schools.

Simpkins lives in a $400,000 home with his grandmother Lillie. He drives a 2018 Silver Dodge Charger, and his family described him as a ‘loveable’ kid. It’s unclear what his parents do for work or how involved they are in his life.

‘He was robbed. It was recorded. It happened not just once, it happened twice. He was scared, he was afraid.

‘It could have been a decision that he could have committed suicide… he was trying to protect himself. They were blessed financially.

‘He was able to get things that other teenagers cannot have, because he wore nice clothes, because he drove nice cars, he was like a target,’ Carol Harrison Lafayette, another relative, told reporters outside the family’s home on Wednesday night.

‘There is no justification of anybody … being hurt. We have to take a look at the fact that bullying is real. And it takes us all. 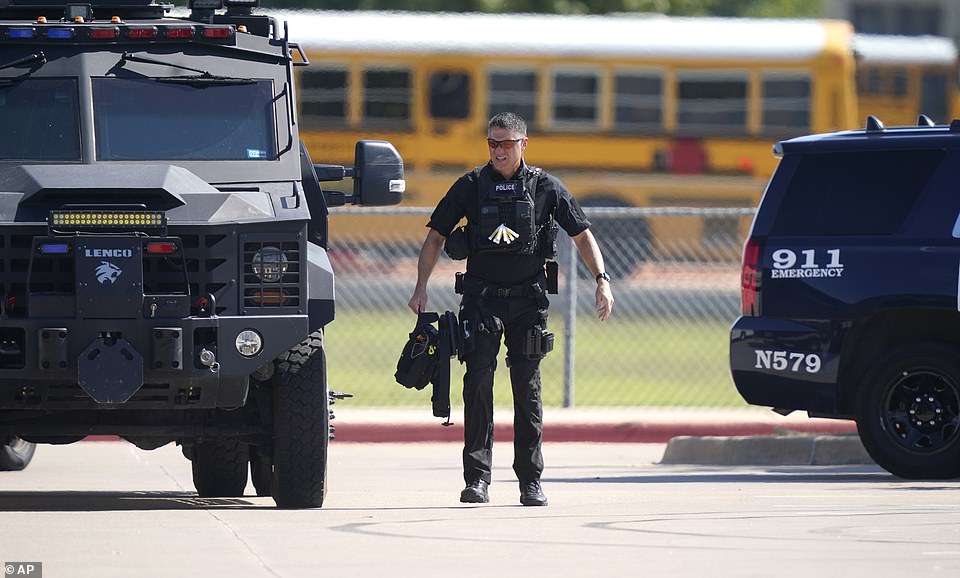 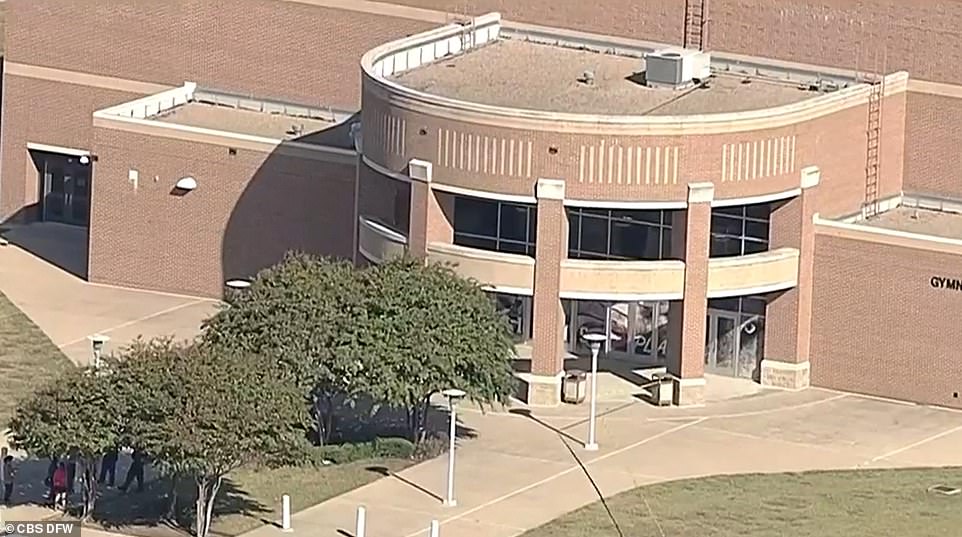 Timberview High School in Arlington, Texas (above) was placed on lockdown on Wednesday morning following reports of an active shooter

‘And I do apologize. We ask as a family for forgiveness of any type of hurt,’ she went on.

Cint Wheat, his cousin, wrote in a Facebook post: ‘At the end of the day my lil cousin was bullied. ‘I don’t know to feel about this he not no bad kid.’

She later claimed in the comments section of her post that her aunt went to the school to report the bullying but that nothing was done.

‘Right now they about to come up with what shoulda coulda been done when all the signs was ignored and the cries for help,’ she said.

Timberview High School did not immediately respond to inquiries on Thursday morning about whether or not the bullying was ever reported.

English teacher Petitt’s sister, Grace Rinearson, said the bullet narrowly missed his aorta and described the shooting as ‘one of the scariest mornings of my life.’

She added in a tweet: ‘Feeling extremely blessed and thankful. Please hold you loved ones close, this is a crazy world we’re living in.’

Another victim, an adult male, is not in surgery but is in a ‘good position.’

A third victim, a teenage girl, was expected to be released from the hospital on Wednesday evening.

‘So two will remain in the hospital, which continue to make hopefully a speedy recovery,’ police said.