The Armed Forces are to be handed billions of pounds to tackle threats from terrorists and hostile states such as Russia.

The Prime Minister said yesterday the Government would do better on defence in the future to ensure the capabilities meet the changing threats facing the UK.

Details of the promise of billions in the next autumn budget to Defence Secretary Gavin Williamson came after Theresa May announced a one-off cash injection of £800 million to the Ministry of Defence.

The Treasury will release £600 million from a contingency pot in the next financial year so it can go towards building a new class of submarines to carry the UK’s nuclear deterrent. This will free up money for operations and training, areas which would have been cut otherwise.

A further £200 million will be made available to move forward certain projects this year, which in turn will give the department more room to spend money on other schemes next year.

Mr Williamson said last night: ‘This is a welcome boost to our Armed Forces, ensuring we defend our country and protect our national interests with the ultimate capability.

‘In an increasingly dangerous world we must strengthen and maintain our ability to counter the intensifying and evolving threats we face to keep Britain safe.’

In the Commons, Mrs May said: ‘Today’s announcement will ensure the work to rebuild the UK’s new world-class submarines remains on schedule and another sign of the deep commitment this government has to keeping our country safe.’ 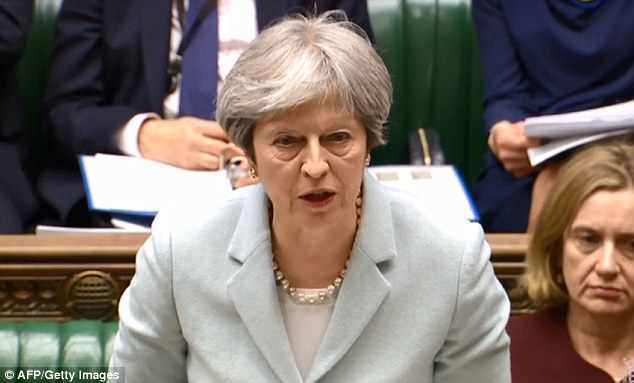 In the Commons, Theresa May said the funding would help to rebuild the UK’s world-class submarines

The MoD is carrying out a defence review to examine which areas of the department need more money after dire warnings about the state of the Armed Forces.

This has been called the Modernising Defence Programme and comes after a wider Strategic Defence and Security Review (SDSR) in 2015.

The mini review will be published this summer and is expected to say the MoD needs greater investment in more modern capabilities and this cannot be done without extra resources.

In a written statement yesterday on the publication of a National Security Capability Review (NSCR), the PM said the Government would ‘deliver better military capability’.

She said: ‘The NSCR focused on capabilities that are critical to our national security to support implementation of the SDSR. As a result we will deliver better military capability through the Modernising Defence Programme, designed to ensure our defence capabilities meet the changing threats we face.’

Chancellor Philip Hammond said of the injection of cash: ‘Our commitment to defence and national security is unwavering.

‘The UK’s defence budget is the highest in Europe and the second highest in Nato and ensures Britain can continue to respond effectively to the ever-changing threats we face.

‘We will continue to invest in our world-class Armed Forces and this additional investment of £600 million will ensure the UK is protected by the nuclear deterrent provided by the new Dreadnought fleet into the 2030s and beyond.’

A Whitehall source said: ‘This is a significant win for Gavin and the Armed Forces.

‘It is a major boost and the Prime Minister and Chancellor have made commitments that more cash will be available to meet the intensifying threats later in the year as we approach the budget.’ 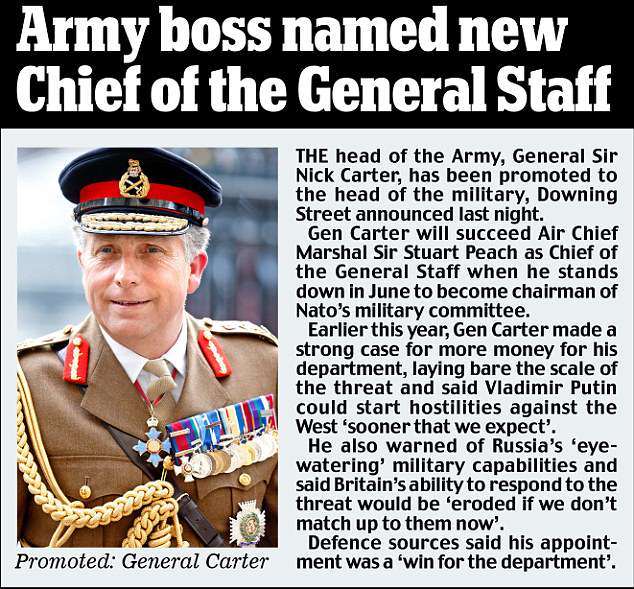