By Maxine Shen For Mailonline

Armed members of the New Black Panther Party were seen marching alongside peaceful demonstrators during a protest in Georgia.

They were seen wearing what appeared to be tactical-style vests with assault-style rifles slung across their chests as they marched in the video posted by Redfish.

Earlier in the week, many of the same people were spotted carrying guns at a protest in Decatur, Georgia.

There, on June 3, they also marched arm-in-arm alongside protesters and addressed the crowd as part of their efforts to protect the rights of the demonstrators, according to Decaturish.

The organization – founded in 1989 and distinct from the original Black Panthers – has engaged in armed protests against alleged police brutality, but its Atlanta chapter did not have a hand in organizing this particular grassroots protest, which was put together by a Georgia State University student.

Decaturish reported that protesters at the march had expressed concern about their presence.

The Southern Poverty Law Center and Anti-Defamation League have both categorized the New Black Panthers as a hate group. 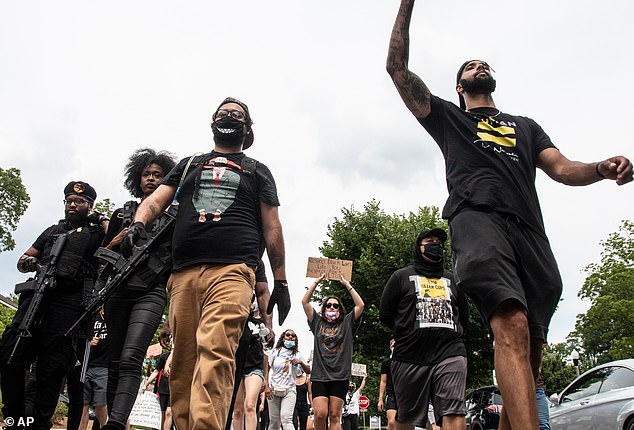 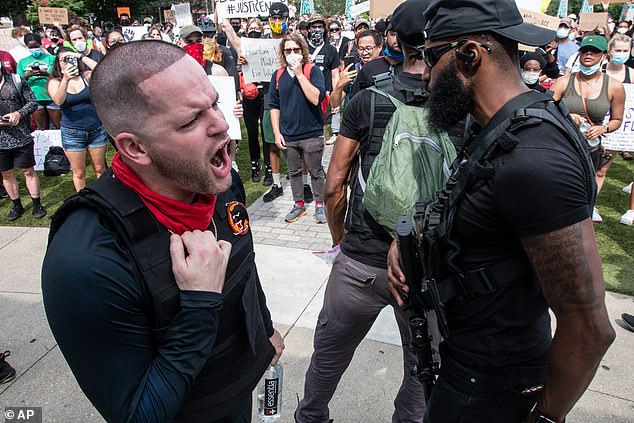 A New Black Panther member (left) is seen speaking to the crowd at the protest rally in Decatur on June 3. Civil rights activists said the group was peaceful

The SPLC says they are ‘a virulently racist and anti-Semitic organization whose leaders have encouraged violence against whites, Jews and law enforcement officers.’

However, the New Black Panthers members who appeared at the June 3 protest ‘were peaceful and talked about love and respect,’ Anti-Racist Coalition for Decatur activist Clare Schexnyder told Decaturish.

She noted that the New Black Panthers members at the march were interracial – there was ‘one white guy’ – and included a female member.

‘They were demonstrating their First Amendment rights and Second Amendment rights. And it’s hypocrisy for white people to call it out when white people with guns have been storming capitols and hanging governors in effigy,’ said Schexnyder, who is white and spoke at the protest.

A local civil rights activist also noted that the New Black Panthers haven’t caused problems at protests they’ve shown up at in the past.

‘In all the years of having contact with them, I’ve never seen or witnessed them do any violence at any public rallies or anything. I don’t think there’s any threat at all,’ civil rights attorney and Beacon Hill Black Alliance for Human Rights Mawuli Davis told the news outlet.

He noted that he had seen New Black Panthers members at protests and rallies throughout the years.

It’s thought that the New Black Panthers may participate in future protests.

The original Black Panther Party was founded in 1966 in Oakland, California, as a socialist political organization and involved the core practice of open-carrying, armed citizens’ patrols meant to monitor the behavior of the local police department and challenge police brutality in the city.

The group emerged as one of the most influential black movement organizations of the late 1960s and at its height in 1970, had 68 offices and thousands of members across America.

The New Black Panther Party was founded in Dallas, Texas, in 1989.

According to the SPLC, the New Black Panthers are a ‘black separatist group that believes black Americans should have their own nation’ and its leaders have publicly made anti-Semitic and anti-white statements.