This is despite revelations that the devastating blaze that almost destroyed the ancient place of worship in Paris might have been caused by a discarded cigarette.

A video shot in a secure No Smoking zone around the building on Friday shows a Gendarme officer puffing away on the historic Double Bridge, which crosses the Seine River to the Cathedral.

He then strolls towards Notre Dame, and tosses his cigarette butt into a dustbin.

‘It all looked very casual and careless,’ said the witness who shot the video. ‘The officer didn’t seem fussed about fire precautions, which are currently very strict indeed around Notre Dame.

‘None of his colleagues seemed to care either. This is despite the risk of fire around Notre Dame still being extremely high.’

Extensive interviews carried out by detectives since the horrific Notre Dame blaze two weeks ago has led to renovators confessing that they smoked illegally around the cathedral.

Police also found seven discarded cigarette butts around the roof, where the fire broke out.

An inferno raged through Notre Dame Cathedral for more than 12 hours, destroying it’s spire and roof but spared its twin medieval bell towers, as a frantic rescue effort was made to save the monument’s ‘most precious treasures’ 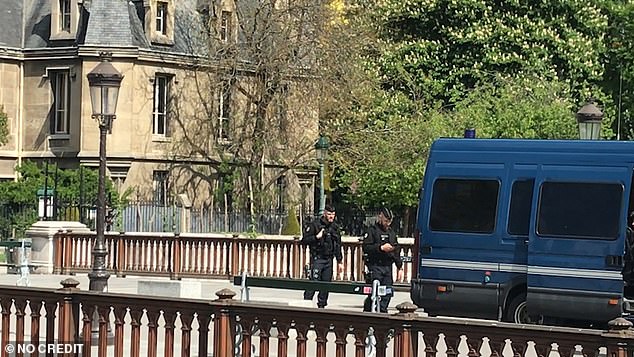 While the cause of the fire is still considered accidental, any proof that a discarded cigarette butt led to the fire could result in a prison sentence.

A criminal enquiry has been on going since April 15 – the day the fire started – and prosecutions are possible.

The main suspects are the renovators working for Le Bras Freres (The Bras Brothers) – a company based in eastern France which had won a contract to restore the Cathedral spire. 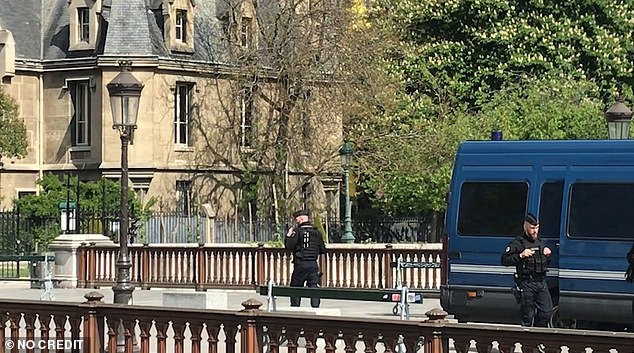 ‘It all looked very casual and careless,’ said the witness who shot the video. ‘The officer didn’t seem fussed about fire precautions, which are currently very strict indeed around Notre Dame’ 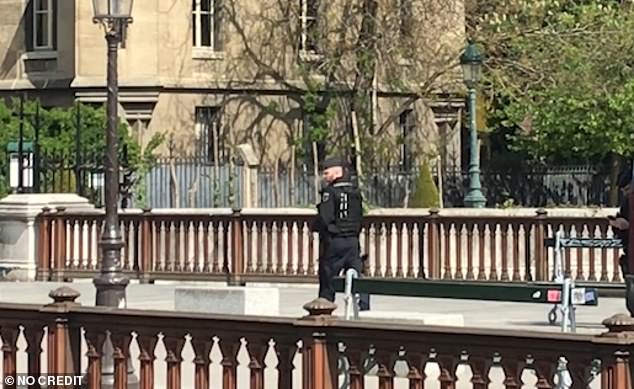 ‘None of his colleagues seemed to care either. This is despite the risk of fire around Notre Dame still being extremely high’ the filmer said

It was lost in the blaze, along with most of the roof, although the Bras workers have insisted they were not on site when it started.

Company spokesman Marc Eskenazi said: ‘Yes, there are some people who, from time to time, have ignored the ban and we regret this.’

Mr Estenazi added: ‘Under no circumstances can a poorly extinguished butt be the cause of the Notre Dame fire.’

In fact, investigators have said the fire could have started at least a full day before emergency services knew about it. 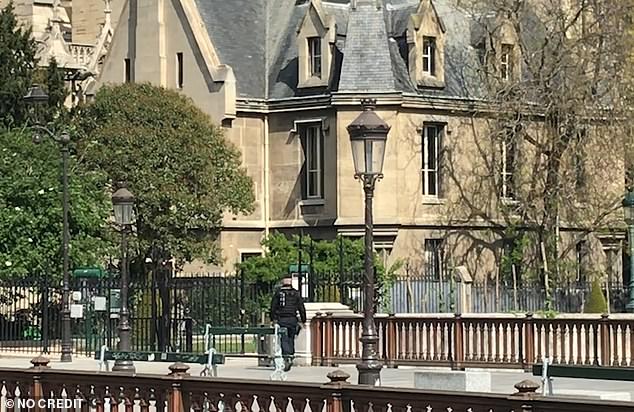 The policeman then strolls towards Notre Dame, and tosses his cigarette butt into a dustbin

Forensics experts have told those leading the criminal enquiry that a discarded cigarette could have started carbonising tinder-dry wood without anyone noticing.

‘This is very common in the old buildings around central Paris,’ said a source close to the enquiry.

‘There would not have been much energy in the fire to begin with, and certainly not enough to trigger alarms. 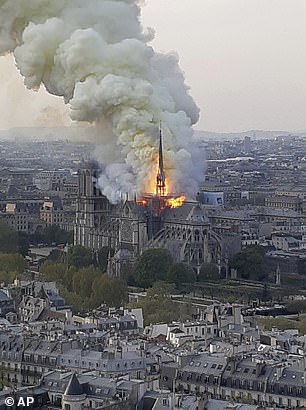 ‘This would have changed as the combustion intensified and sparked a full blown fire on the roof of the building.’

While British police are not allowed to smoke on duty, it is common to see officers with cigarettes in France.

However, a Gendarme source said it was ‘unfortunate that an officer was seen smoking so close to Notre Dame so soon after the fire.’ He added: ‘It is likely that this will be looked into.’

In a further twist, it has emerged that Le Bras Brothers were involved in another site fire earlier this month.

On April 1, a blaze broke at a listed building being used as a youth centre in Belleville-sur-Meuse, in eastern France.

The damage was minor, and the fire was easily brought under control by firefighters, but Le Bras restorers were once again implicated, and interviewed by police.

The Paris investigating source said: ‘The company has accepted responsibility for the fire in Belleville, but not the one in Paris. What happened in Belleville is obviously of significance to the enquiry in Paris.’ 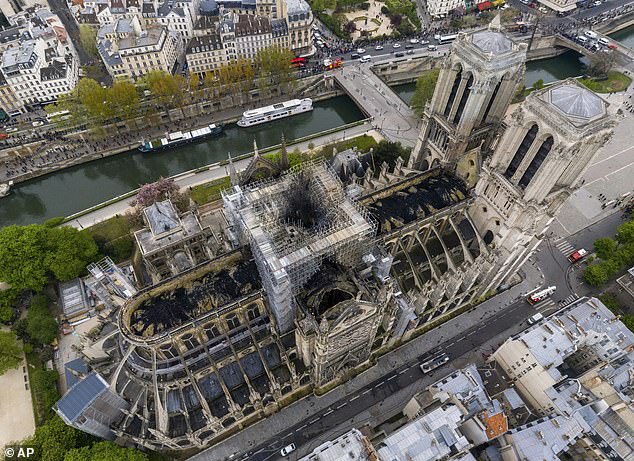 An aerial view of the cathedral shows the full extent of the damage which started on April 15. A criminal enquiry has been on going since the start of the fire, and prosecutions are said to be possible

It had won the contract to restore the Notre Dame spire that was designed by the architect Eugene Viollet-le-Duc and erected in 1859.

They were due to be on site for up to four years along with Europe Scaffolding, another company which had just put 250 tons of scaffolding around Notre Dame, along with a lift that could move up and down the 300ft fire.

Notre Dame has been closed for the foreseeable future, but a trust fund has already raised more than a billion euros for its restoration.

French president Emmanuel Macron has pledged that it will reopen ‘within five years’ and that it will be ‘more beautiful’ than before.